People have noticed that not all major comics publishers march to the same drummer. In fact, one of them can’t help tripping over its own feet.

A tickld dialog illustrates the differences between DC and Marvel.

DC: Wonder Woman is too difficult to find a movie audience for –

Marvel: YO YOU LIKE BLACK WIDOW? HERE SHE IS IN THE NEXT CAPTAIN AMERICA MOVIE WITH A TON OF SCREENTIME AND MAJOR ASSKICKING SKILLS

And Cracked identified 4 Signs DC Comics Has No Clue How to Make Superhero Movies:

It’s not just the plots that have to be super-serious with DC — it’s the outfits as well. Zack Snyder “tried like crazy to keep the red briefs” on Superman’s outfit. Ultimately, they were cut from the film, because a biologically impossible humanoid extraterrestrial in a blue jumpsuit is fine, but if you can see his underwear, that’s just too far. 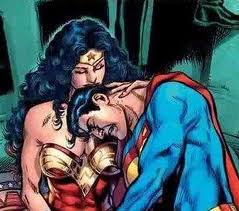 There’s even a dedicated website — Has DC Comics Done Something Stupid Today?

Are you tired of having to comb through dozens of articles trying to figure out if DC Comics has done something cringeworthy today? Would you like to be the first person to know how long it’s been since DC’s alienated fans, minorities or people with discerning taste? Do you like regularly experiencing schaudenfreude at the expense of a major corporate entity?

The counter says it’s been 56 days since DC did something stupid. But have they really been paying close attention?