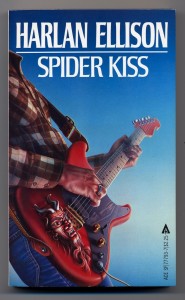 The ‘SF’ designation is visible on the lower right corner.

How unhappy was Harlan Ellison that a 1982 reissue of his rock ‘n’ roll novel Spider Kiss had been labeled SF? Unhappy enough that went into the office and slam-dunked the CEO of publisher Grosset & Dunlap – a story he retells with advantages in the May 6 LA Times:

“I put him in a hold that I had learned from Bruce Lee. I took him to his knees. Then I duck-walked him back to his door,” on his knees all the way, Ellison recounts. The typing pool, all women then, stopped work and watched the show, he says, “with enormous pleasure.”

When they got back to the man’s office, the publisher on his knees, Ellison says he banged the man’s head into the door until he opened it. They went inside — the publisher, Ellison and Ellison’s editor, a woman he remembers fondly, who soon was huddling on a couch.

“I picked up a chair and threw it,” Ellison says. Rather than shattering the windows, “it bounced around the room.” The publisher had scrambled behind his desk and was dialing the phone.

“I jumped onto the desk and ripped the phone out of the wall,” Ellison says. Back in 1982, that’s how phones worked — they had cords, attached to walls. “He tried to crawl through the desk’s kneehole. I grabbed him by the collar and threw him across the room.”

Who needs SFWA when you have Bruce Lee’s moves?