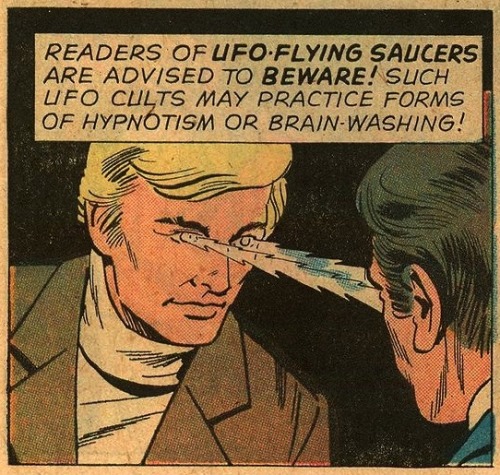 The very thing fans were worried about….

It seems perfectly reasonable today that a winner of the Philip K. Dick Award might have a collection of UFO and alien contact literature named after him, as is the case with the Jack Womack Flying Saucer Library at Georgetown University.

It was not always so. Science fiction fans spent decades craving respectability in a world prone to dismiss their favorite reading as “That crazy Buck Rogers stuff.” One of the cornerstones of respectable fan culture was an interest in science, how future technology might lead to starships and encounters with alien civilizations. To be scrupulously avoided was any taint of flying saucers or alien abductions.

Science fiction insiders are, of course, habitually sniffy about this stuff. I am; and I remember being a kid in the 1960s with my own copy of Flying Saucers: Serious Business [by Frank Edwards]. Probably that’s why.

Womack took that as his cue to reassure fans he still walked their side of the street:

Let me repeat that. I don’t believe in the woo-woo itself.

In certain times and places, studying the woo-woo was as close as a person could get to that sought after Sense of Wonder. There was no one more respectable than Takumi Shibano, co-founder of Japanese fandom, who said his fascination with sf drew him to join the UFOs Flying in Japan’s Skies Research Group in 1956. “It wasn’t that I was so enamored of UFO research, but that I was interested in those basic, fantastical science ideas, so I wanted to do sf.”

However, in Womack’s case it wasn’t a placebo, but one of many interests attached to his wide-ranging curiosity about the weird. At the time of the interview in 2001 the “Womack Collection of the Human Mind at Work and Play” included thousands of items cataloged in a variety of topics:

The Flying Saucer archive at Georgetown is just a fraction of that — 242 books, typescripts, pamphlets, tracts and magazines published primarily from 1948 to 1980.

The collection includes most of the major 1950s works on flying saucers, the works of all major contactees, bibliographies, compilations of so-called photographs, and a number of publications from the Saucerian Press. 19 of the books in the collection are inscribed or signed by their authors. Several books have supporting letters, ephemera, and press materials laid in.

Some of the most amusing visuals from the UFO publications in Womack’s collection can be seen on Boo-Hooray’s Tumblr page. And Boo-Hooray will publish a visual history of the genre, written by Womack himself, later this year.