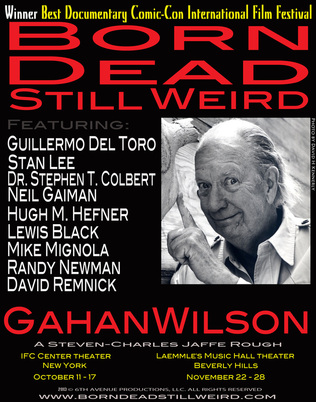 Escalators that eat people; a human sacrifice amid backyard barbeques. In any pantheon of cartoonists, Gahan Wilson and his uniquely mordant sense of humor fit somewhere between Charles Addams and Gary Larson. Armed with a perverse comedic view of the monsters behind every corner and an illustration style that hits with the thwack of a nightmare, Mr. Wilson has been reassuring his readers for more than 50 years that things really are as bad as they seem, probably worse.

Steven-Charles Jaffe tells why he made the movie in a self-interview on the film’s website.

I was ten years old when I saw my first Gahan Wilson cartoon. It rocked my pre-pubescent brain. It was eye candy for the demented. I became obsessed with his cartoons; the lurid colors, the dark and twisted point of view, and the asymmetrical way he drew people and the world they inhabited. I had no idea who this Wilson fellow was, or how to pronounce his first name, but I felt I had discovered a kindred spirit. Over the years, my love of Gahan’s work only increased.

After becoming a producer, I was obsessed with trying to meet the mysterious cartoonist to see if there was some way of bringing his work to the big screen. I finally met Gahan Wilson and we struck up a friendship that continues to this day. After seeing the documentary on cartoonist Robert Crumb, I decided I had to make a documentary about Gahan so that the rest of the world would realize what a national treasure and a truly inspiring artist he is.