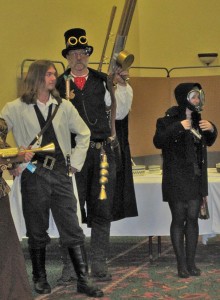 Eric and Gary Hayes and Rhiannon at TusCon in 2005.

Artist Gary Hayes, a Tucson, AZ fan, died of a heart attack on May 29. He and his wife, Rebecca, have been part of the local sf convention – TusCon – for many years. 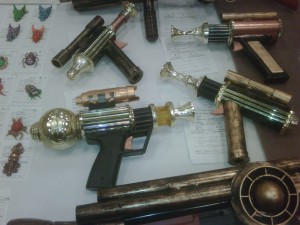 Hayes loved steampunk and made all kinds of gear and weaponry.

He created program book covers for TusCon and art for membership badges. Hayes worked security, too – towering 6’ 6” tall and slinging a faux machine gun, who was going to talk back to him?

Hayes and his homemade Tommy-gun also put in appearances at a local historical re-enactment called Dillinger Days, after the famous gangster. 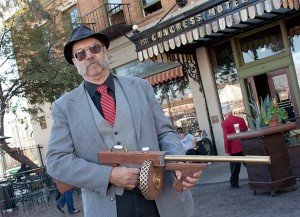