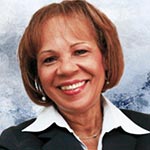 Speakers at the Starship Century Symposium generally dealt with a yet-to-be created future they have extrapolated from current science, whereas Smith, a former Department of Transportation official, focused on today’s commercial space industry. If the others gave us storyboards, Patti Grace Smith gave us high definition photos.

“Space is an attitude,” said Smith, who credited Elizabeth Dole for getting the commercial space office placed in the Department of Transportation.

The FAA forecasts there will be 291 commercial space launches in the global market from 2012-2021. 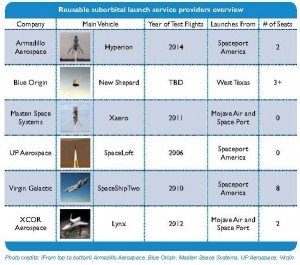 Builders of Suborbital Reusable Vehicles (SRV) are taking reservations – Virgin Galactic wants to start flying its 6-seater SpaceShipTwo before the end of the year.

Drawing on DOT’s 2012 report Suborbital Reusable Vehicles: A 10-Year Forecast of Market Demand [PDF file], Smith said the average price per seat for a ride to the threshold of space is estimated at $123,000. Armadillo, Virgin Galactic and XCOR reported 925 total reservations as of June 2012.

A survey of high-wealth individuals suggests there are enough customers willing to pay current prices (between $95,000 and $200,000) to keep up a sustained demand for suborbital flight.

No cargo prices (other than satellite deployment costs on an XCOR Lynx Mark III) have been announced, though some providers say cargo costs align with seat costs for their vehicles. 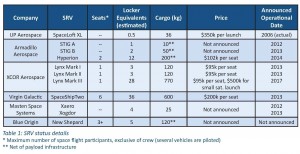 Smith, noting that when in government service she was especially concerned with domestic business opportunities, said U.S. launch providers will need to remain competitive to win a significant portion of the future launch contracts over foreign competitors.

The government supports domestic launch providers through its policy toward risk. A launch provider is required to obtain the maximum possible liability insurance. Then, in the event of a mishap that leads to successful third-party claims in excess of the insurance requirement, the U.S. government is authorized to pay up to an additional $1.5 billion (adjusted for post-1988 inflation – approximately $2.7 billion today). The payment is not automatic and subject to Congressional appropriations. The commercial space launch provider (or other legally liable party) is responsible for any claims beyond that.

The supporting law has been extended by Congress several times since its original passage in 1988. The U.S. industry views the arrangement as a key element in its commercial competitiveness. While Smith had advocated for another 5-year extension, with the current political climate and budget constraints it has kept going with a year-to-year renewal.