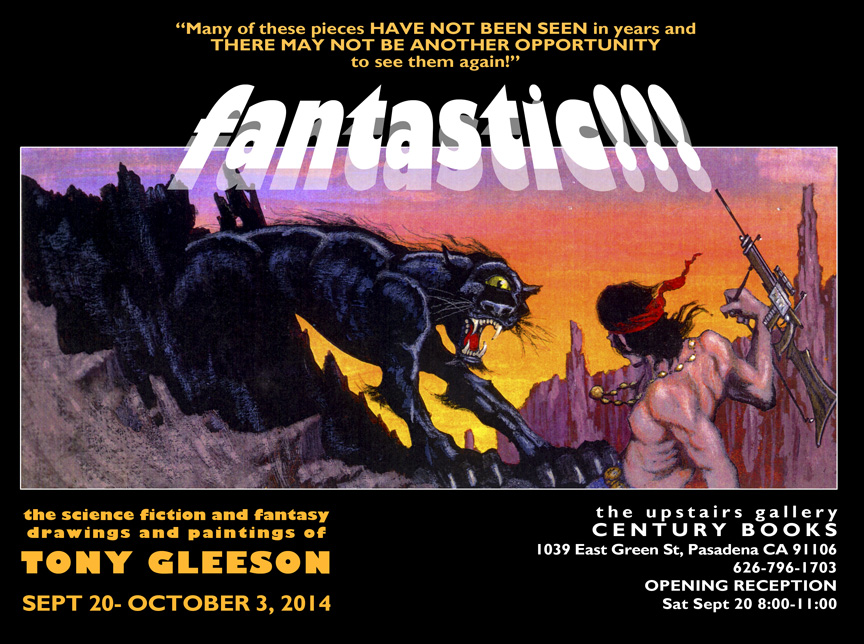 By John King Tarpinian: This evening I went to the opening of a friend’s sci-fi art exhibit — Tony Gleeson, in Century Books’ upstairs gallery in Pasadena, CA.

I took some very bad photos of some very nice artwork, some of which you might recognize. He’s done covers for books by Richard Matheson, Arthur C. Clarke, and many pulps; Fantastic Stories, Science Fiction Book Club (Eye of the Cat, in the poster above) Galaxy Magazine, (Jabberwock 3000), and Amazing (Looking Glass).

Tony Gleeson. I Am Legend, cover

If you happen to find yourself in Pasadena, visit the bookshop gallery. The exhibit is on now thru October 3 during the bookshop’s normal operating hours.

Tony’s bio:  After studies in Fine Arts at Georgetown University and Illustration at the Art Center College of Design, Tony began his career in New York. His earliest illustration work was for science fiction magazines such as Galaxy, Amazing, and Fantastic. A series of assignments followed for book cover paintings for Doubleday & Co’s Science Fiction Book Club.

Upon moving to Los Angeles in 1977, Tony opened his own studio, creating book cover art as well as interior illustrations for a wide range of books, magazines and newspapers. His work has been featured in numerous advertising campaigns and product packaging and he has also extensively created storyboard and concept art for television, film and music videos. His science fiction and fantasy related paintings were exhibited at the legendary Dream Masters Gallery in Los Angeles and the gallery of the original Change of Hobbit in Santa Monica.

Through most of the 1990s, Tony was associated with Neal Adams Continuity Studios as a designer, letterform/logo artist, and illustrator. Throughout that time and to the present, he has continued to operate his own studio, creating illustration, concept art, and commissioned art pieces, utilizing both digital and traditional approaches. In 2005, he was commissioned to create a dinosaur giclée print that was presented to Ray Bradbury on the occasion of his 85th birthday.

Among his recent projects have been a print edition of pencil renderings of fantastic saurian creatures, “Fanciful Visions of Dinos and Dragons,” and a series of portraits of authors of imaginative fiction. In the past three years, he has been the subject of three solo art exhibitions and participated in four group exhibitions.