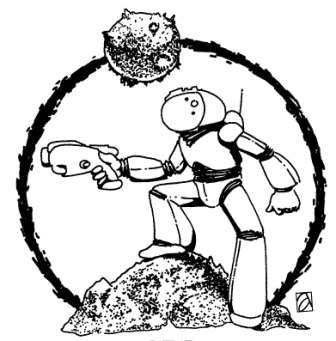 By John Hertz:  Marty Helgesen, who I think one of our better fanwriters and who I wish would resume publishing Radio Free Thulcandra, inspired me to find that there is a Website SpaceWesterns.com.  How active this enterprise is I’m not sure; I saw nothing more recent than 2010, but what do I know?  It seems to have Keith R.A. DeCandido in it.

There was a 2007 Space Western Limerick Contest, and a 2008 Space Western Senryû Contest.  I’ll guess you know limericks; the senryû (I put a circumflex over the u to indicate the Japanese long vowel; I don’t have a macron available, but that’s also used; some write senryuh or senryuu), after the pen name of a 1718-1790 poet who compiled books of them, is a 5-7-5-syllable satirical cousin of the haiku.  I offer one of each.

The humanoids served and obeyed.
Their sheriff was never afraid.
Taking up all our guns —
And our knives — and our fun —
He was pleased with the quiet he’d made.

Git along, dogies;
It’s your misfortune, not mine,
On through that wormhole.

In J. Williamson’s classic “With Folded Hands” (1947), humanoids from off-planet under the slogan “We Serve and Obey, and Guard Men from Harm” first knock androids out of the market by being neater, smarter, and defter, then make customers happy by doing all the unpleasant work, then take over everything dangerous, then eventually remove everything that might be risky, a peaceful but stultifying life.

In justice to Reginald Bretnor’s 1950 story “The Gnurrs Come from the Voodvork Out” I concede that gnurrs can’t abide the smell of horses and are eventually conquered by calling in the cavalry, so my own title above isn’t much good either.