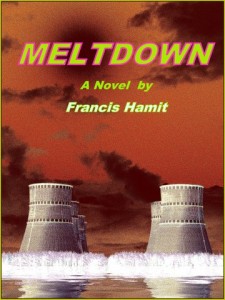 By Francis Hamit: I don’t want to suck all of the air out of the room, but we plan to do quite a bit of publishing, etc, this year. So I am sending you this image as an announcement of a novel to be published as soon as I dust off the cobwebs from the previous version, which was put aside after 9/11.

This is a heartwarming, sentimental little fable about a terrorist attack on a nuclear power plant. In the interests of inaccuracy and not making it a “how to” book for the bad guys, it will be set in an alternative universe much like our own and I will lie through my teeth about the critical details of security protection at such places. Actually, since I have been out of the game for a good long time, I won’t even have to do that. I am sure everything has evolved for the better.  It will be a thrilling ride for the average reader and I will thank the experts to keep their corrections to themselves.

By the way, Mike Donahue and I will be at LepreCon next month, and will do a joint panel about the forthcoming film, Marlowe, based on my stageplay about Christopher Marlowe’s spying career. Mike will direct the film. Copies of the first draft screenplay can be bought from Amazon.com and other bookstores and will also be on sale there. Amazon.com has a better price than I can offer.  Naturally The Queen of Washington and The Shenandoah Spy will also be available.