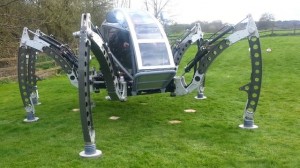 Matt Denton finally decided making small-scale animatronics for the film industry was too confining and built a giant mantis robot with hydraulic legs.

It took him four years and hundreds of thousands of pounds.

The robot, driver-operated by joysticks within a cockpit, can only travel at 1.5km/h (1mph) and manage a distance of 5km on a 20-litre (4.5-gallon) tank of diesel.

“It’s not about miles to the gallon, it’s about gallons to the mile,” he said.

“It wasn’t built to be efficient and fast. It was built to look cool and insect-like and fun.”

2 thoughts on “He Got The Bug”