Playboy magazine founder Hugh Hefner died at home September 27 of natural causes. He was 91. While the magazine’s primary appeal was nude pictures of women and sex-oriented features, Playboy was also known for its cultural and political articles, and for fiction.

If you carefully look through the wrong end of the telescope, you can focus on Hefner’s and Playboy’s impressive record of publishing science fiction.

The Encyclopedia of Science Fiction explains that as a young man Hefner was an avid reader of Weird Tales. Once he started Playboy, the editors responsible for selecting its fiction likewise had a taste for sf/f – particularly Ray Russell, Robie MacAuley, and Alice K Turner.

Ursula K. Le Guin’s “Nine Lives” (1969) was the first story by a woman published in Playboy, according to the Internet Science Fiction Database — although it appeared under the name U. K. Le Guin.

In 1998, Turner edited an anthology of science fiction published in the magazine, The Playboy Book of Science Fiction.

The Washington Post’s obituary documents Hefner’s reputation as a defender of First Amendment civil rights, and reproductive rights, and someone who believed gay rights were part of the sexual revolution he advocated, as shown early on by Playboy’s 1955 publication of Charles Beaumont’s “The Crooked Man” —

“The Crooked Man” depicted a dystopian future where homosexuality was the norm, heterosexuality was outlawed and angry anti-straight mobs marched through the street chanting “make our city clean again!” Even the relatively progressive Esquire magazine had rejected the piece because it was too controversial.

But Beaumont found a fan in a young Hugh Hefner, who agreed to run it in his Playboy magazine, then less than two years old.

Outraged letters poured in to Playboy. Even readers of the pioneering nude publication found Beaumont’s tale of straight people dressing in drag and sneaking into dark barrooms to find partners too offensive for their tastes.

Hefner responded to the backlash in a defiant note. “If it was wrong to persecute heterosexuals in a homosexual society,” he wrote, “then the reverse was wrong, too.”

Hefner was friends with Ray Bradbury. On Ray’s 90th birthday, Hefner hosted a party for him at the Writers Guild. Buzz Aldrin was there, too. John King Tarpinian helped get Bradbury back and forth. John took these photos, and wrote a little about the party in another post. 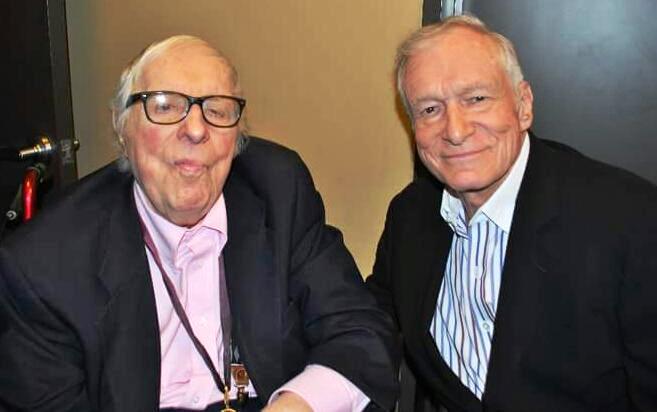 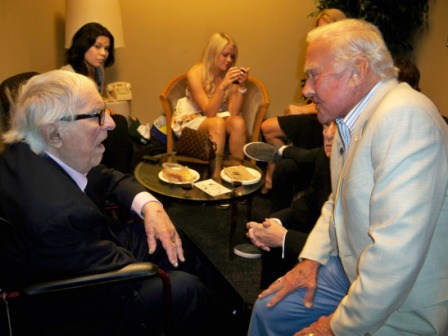 Ray Bradbury and Buzz Aldrin in 2010.

Tarpinian says, “Because of Ray, I did get to say I bought the magazine for the articles.”

[Thanks to John King Tarpinian, Cat Eldridge and Greg Hullender for the story.]