This award recognizes Dr. Jerry Pournelle’s many years of support for space science, exploration, development and settlement and his close association with Robert Heinlein. He was active in the NSS predecessor, the L5 Society, during its early years. Jerry served as co-chair of the very first ISDC, NSS secretary, and as a Board member.

Jerry was also Chair of the Citizen’s Advisory Council on National Space Policy. This group was active during the 1980s and was one of the most effective groups promoting specific space related policy positions at that time. Robert Heinlein was also an active member of that group. The group’s early support of missile defense eventually led to the perceived need for an inexpensive launcher. The briefing that he and two others gave to then Vice President Quayle was instrumental in getting the approval of the DC-X program, overcoming government skepticism about the project. Jerry was present at White Sands on September 11, 1993 when the first large rocket, the DC-X vehicle, was reused.

Jerry has consistently supported the vision of self-sustaining human settlements in space and on planetary surfaces, and as part of a free, spacefaring civilization, which is at the very heart of the space movement. Jerry’s work as a science fiction author, focusing on science fiction with realistic physics, has contributed to a better understanding of the limitations and the abilities of human space operations. Few have made such a rich contribution to these fields.

The award presentation will be at the International Space Development Conference in San Juan, Puerto Rico, May 18-22.

The NSS Robert A. Heinlein Award is given once every two years “for lifetime achievement in promoting the goal of a free, spacefaring civilization.” The winner is decided by the vote of the entire NSS membership. The award consists of a miniature signal cannon (a reference to The Moon is a Harsh Mistress.) 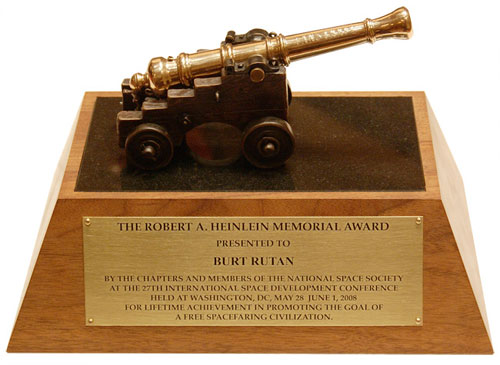 [Thanks to Will R. for the story.]