By James H. Burns: The Los Angeles Times has reported the passing of Judi Meredith, who starred in two memorable fantasy and science fiction “cult” movies: as one of the ill-fated astronauts in the still chilling (and incredibly atmospheric) Queen of Blood (aka Planet of Blood) and Jack the Giant Killer (1962), in which she gave perhaps her signature performance, as the captivating Princess Elaine. 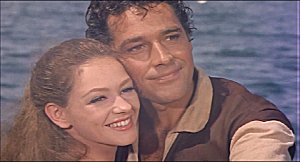 Judi Meredith and Kerwin Matthews in Jack The Giant Killer.

All I knew of Meredith was having read once that she dated Frank Sinatra.

Her obituary reveals far more intriguing details. She had been a teenage ice skating show performer, before injuries compelled her to consider acting. George Burns discovered her at the Pasadena Playhouse and cast her on The Burns and Allen Show for many episodes, launching a television career that also included guest shots on Have Gun, Will Travel, Bonanza  and Hawaii Five-O.

The answer to the mystery that seemed to surround Meredith — that she apparently just disappeared later in the 1960s — was apparently in plain sight:

In the early ’60s, she married Gary Nelson, and as his directing career took off, he didn’t want a working wife. (Nelson directed several episodes of Get Smart!, as well as Gunsmoke and Happy Days, and the genre feature films, Freaky Friday (1976), The Black Hole, and Allan Quatermain and the Lost City of Gold.)

The Nelsons had two sons, moved from California in 1998 to Chicago, and then Florida, before settling in Las Vegas in 2002. (They also enjoyed cruising the Caribbean by yacht…)

Jack The Giant Killer‘s reputation as simply a Harryhausen knockout has kept many from discovering  that it has some of the very best fantasy adventure sequences on film, in a story often displaying legitimate charm, and thrills.

For years, the movie was virtually lost, not in distribution or on TV (preventing that 1960s and ’70s generation of 4:30 movie kids from discovering it).

And then it emerged as a MUSICAL version, where someone tweaked the editing and frame progressions so that the characters were now SINGING, with portions of a new, dubbed soundtrack.

Jack The Giant Killer has been available now for years on DVD (and even though there’s controversy that the image is in the wrong aspect ratio, it’s still well worth checking out).

There’s a terrific scene early in the movie, where the Princess dances with an animated figurine (which you can see at roughly one minute and forty-five seconds into the trailer here).

I used to show that sequence to my eldest niece when she was a toddler, and the look in her eyes was beyond magical.

The ad’s narration says: “See the enchanted doll that came to life and made a princess dance with joy.”

It was the same with my princess, too.

The scene, and movie, was directed by Nathan Juran, and the stop motion animation and other special effects were largely created by a celebrated group including Jim Danforth and Project Unlimited, the spfx team that worked on many George Pal films, and The Outer Limits.

I think that in this special instance, Judi Meredith’s talents had a hand in it too.