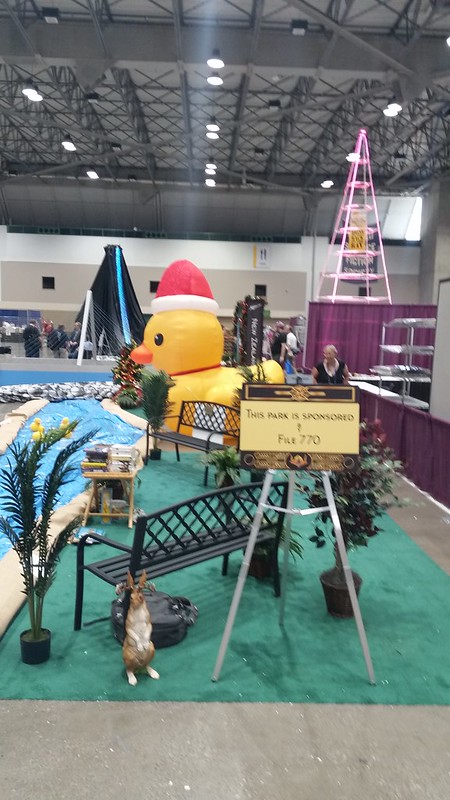 By John Hertz: (Reprinted from Vanamonde 1211.)  For me the best news of the World Science Fiction Convention was Mike Glyer’s winning the Hugo Award for Best Fanwriter and his File 770 for Best Fanzine.  I was his accepter, and tried to do him justice.  Steve Stiles won Best Fanartist, great news too and comical because he’d put in his Art Show exhibit a cartoon from a few years back about planning a fine speech in case he won, winning, and ending with utter discombobulation; fortunately in the event he was combobulate.  In another double achievement NASA Astronauts Stan Love accepted the Campbell, receivng the tiara, for Andy Weir, and Jeanette Epps accepted Best Dramartic Presentation, Long Form, for The Martian from his novel.  Both spoke feelingly of accurate scence, and realism.  The Big Heart, our highest service award, went to Edie Stern & Joe Siclari.

Design wizard Elizabeth Klein-Lebbink had helped me hugely making this year’s Rotsler Award exhibit on computer-aided banners.  Bruce Farr of the convention committee found a spot to hang them in the Exhibit Hall; after a while on-site we found a better and moved them, which would’ve been impracticable with the photocopy-and-construction-paper versions I’d made without such help in previous years.

I was Master of Ceremonies for the Masquerade.  That and judging have wonderfully different perspectives.  I like the custom of M.C. and judges dressing up; since English Regency costume is the funny-suit I’m known for, I wear that.  Marty Gear used to dress as Count Dracula; when, as happens, he had to buy time for readying the next entry, he told vampire jokes; so I tell anecdotes of Beau Brummell (1780-1840).  This year being the 80th anniversary of Bruce Pelz’ birth, he excellent at costuming inter alia, and known as the Elephant, I also told elephant jokes.  But fame is relative.  I learned later some folks supposed I must be role-playing Brummell.

Besides the Hugos, we awarded Retrospective Hugos i.e. for 1940 (see Section 3.13 of the Constitution).  What a fruitful year for Heinlein! six works on the ballot; for Novella and Novelette he competed against himself (“Coventry”, “If This Goes On” [winning], and “Magic, Inc.”; “Blowups Happen” and “The Roads Must Roll” [winning]).  Charlene Piper, Van Vogt’s granddaughter, driving 25 hours from northern Idaho, entered the hall just in time to hear Kevin Roche and Marissa Pelot announce Slan had won Best Novel, and to walk onstage and accept, amid cheers.  She told me afterward this was not her first Worldcon, but her fourth.

Geri Sullivan and Pat Virzi hosted a fine Fanzine Lounge (although not using that name).  Sullivan reprised some of her fanhistorical display from Detcon1 and added footage from the Video Archeology project.  WOOF (Worldcon Order Of Faneditors), the APA (Amateur Publishing Ass’n) collated yearly at Worldcons, was assembled, Murray Moore at the helm, Marc Schirmeister drawing a header for the Table of Contents front page; Schirm also brought a typewriter and Jeff Schalles a mimeograph, both duly employed.

Sullivan deciding Fandom Rocks staged an exhibit along the banks of a river in the Exhibit Hall, named for Author Guest of Honor Michael Swanwick so we could get down upon the Swanwick River.  Michelle Pincus and I had gotten a rock from the LASFS Clubhouse, which alas didn’t arrive; two of my commissions did, a drawing of a roc by Brad Foster and another by Sue Mason; these went into the Fan Funds Auction for the benefit of TAFF (Trans-Atlantic Fan Fund) and DUFF (Down Under Fan Fund), which I missed because it was scheduled opposite Regency Dancing, but Norm Cates told me TAFF delegate Anna Raftery and DUFF delegate Clare McDonald-Sims were both there, and the Auction raised $2,700.

On my Art Show tour as usual if people didn’t ask me questions I asked them questions.  Nobody but I had to answer.  I was particularly glad to see Mark Ferrari exhibiting; his car crash a few years back cost him the coördination he used in that almost incredible mastery of colored pencils, but he’s learned to achieve similarly with electronic media.  No fanartists exhibiting but Stiles (which is like saying no composers but Haydn); nothing from Japan; no Di Fate, Eggleton, Giancola, Whelan; I’d tried but failed to get Elizabeth Berrien.  I saved Graphic Artist GoH Kinuko Craft for last.  She’d brought her Rhine Maidens poster for the Dallas Opera’s Rheingold (R. Wagner, 1869).   The Heinlein Society happily for all brought some Kelly Freas originals.  There was an open ASFA Lounge with a workspace for artists willing and able to produce in public.

On Between Planets (R. Heinlein, 1951) Andy Porter mourned the death of Clifford Geary, who’d done striking white-on-black illustrations, in this centenary year of his birth (1916-2008); I quoting A.J. Budrys’ “Always ask Why are they telling us this?” pointed to Phipps, whom Heinlein didn’t leave a mere annoyance but showed able to arrange Don Harvey’s orders.  On “Dr. Jekyll and Mr. Hyde” (R. Stevenson, 1886) Milt Stevens said Hyde was the original Id Monster; we considered why we see Hyde first; I recommended Nabokov’s discussion in N’s Lectures on Literature (1980).

Fred Lerner had invited me to join him and Jerry Pournelle on a panel discussing Silverlock (J. Myers, 1949); Pelz’ music for some of the songs, and the invaluable Companion by Anne Braude and Lerner, are in the 2004 NESFA Press edition.  I said Myers had the skills of a skald.

At Closing Ceremonies, Ken Keller the chair of MidAmeriCon I (34th Worldcon), who’d put a Bob Tucker tribute in WOOF, led us in a smooth libation; PNH said “I can’t count the conversations I’ve had with total strangers”; and MidAmeriCon II chair Ruth Lichtwardt passel the gavel to Jukka Halme and Crystal Huff, 2/3 of next year’s co-chairs.

On the Street Where I Live

Plucking the right note,
Not afraid to stop or start,
He: how about you?

5 thoughts on “Kansas City, There I Went”