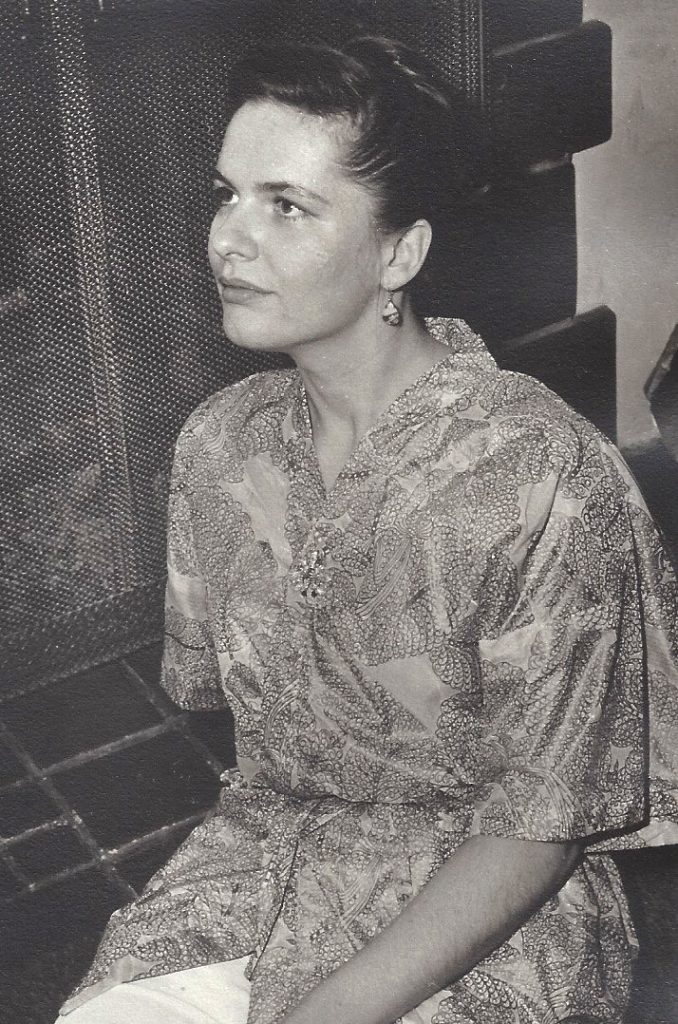 Karen Anderson, author and a master of all the fannish arts, died March 17. Her daughter, Astrid Bear, announced her passing on Facebook.

My mother, Karen Anderson [widow of Poul Anderson], died last night. It was a peaceful and unexpected passing — she died in her bed and was found by the Sunday visiting nurse…. Memorial gathering plans to be announced later, but in the meantime, raise a glass to the memory of a fine woman. If you are moved to make a donation, please consider the SFWA Emergency Medical Fund or the UCLA Medical School.

Born Karen Kruse in Kentucky in 1932, she married sf writer Poul Anderson in 1953. They moved to the Bay Area, where their daughter Astrid (now married to Greg Bear) was born in 1954. Poul died in 2001.

Karen and Poul collaborated on a number of stories over the years, and on the King of Ys series published in the 1980s. And she wrote poetry, including the first published science fiction haiku (in F&SF, July 1962).

Even more notably, Karen made many historic contributions to fannish culture.

She was the first person to intentionally use the term filk music in print. ZineWiki explains —

In the 1950s, Karen Anderson spotted a typo in a fanzine while reading an essay by Lee Jacobs on folk music, where he had mistyped “folk” as “filk”. In her words, “Who ever heard of a filk? Since the essay appeared in an amateur publication circulated among science fiction fans, though, there was only one thing to do. Rather than waste a phrase like “filk song”, something must be created to which the name could be applied.” There had been songs written by science fiction fans since the 1940s, but Anderson’s new name for them caught on, and she is credited with naming “filk songs”.

Karen Kruse Anderson also was the first faned to publish a filksong, as Lee Gold documented:

Traveling yet further back in time, to the 26th SAPS distribution, Winter, 1953, on page #22 of Die Zeitschrift für Vollstandigen Unsinn #774 by Karen Kruse Anderson is…the first-known song published as a filk song [123k scan] – written (see the note in The Zed #780) by Poul Anderson.

And Karen, a rare beauty, shined as a costumer. She personified a familiar sf image in this array of “Warrior Women” photographed by George Young at the 1955 Worldcon. (She’s on the right.) 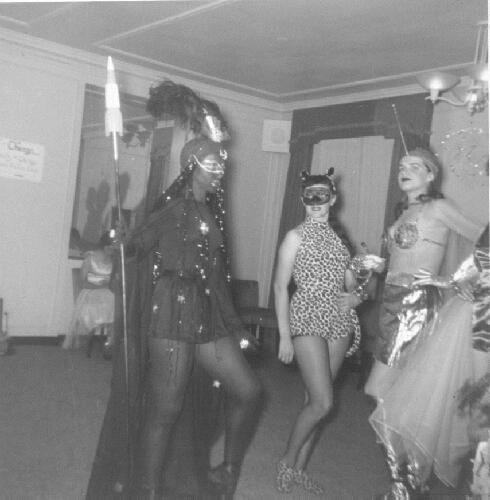 Warrior Women. 1955 Worldcon. Karen is on the right. Photo by George Young.

Later, she brought daughter Astrid into her presentations, as shown here in Ben Jason’s photo from the 1964 Worldcon. 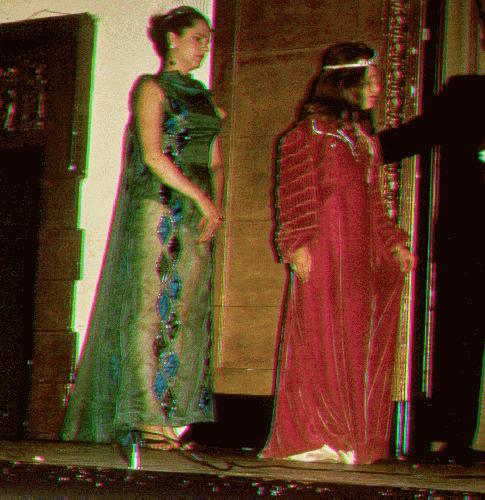 Five years later at St. Louiscon, mother and daughter etched their names in masquerade history as “The Bat and the Bitten.” 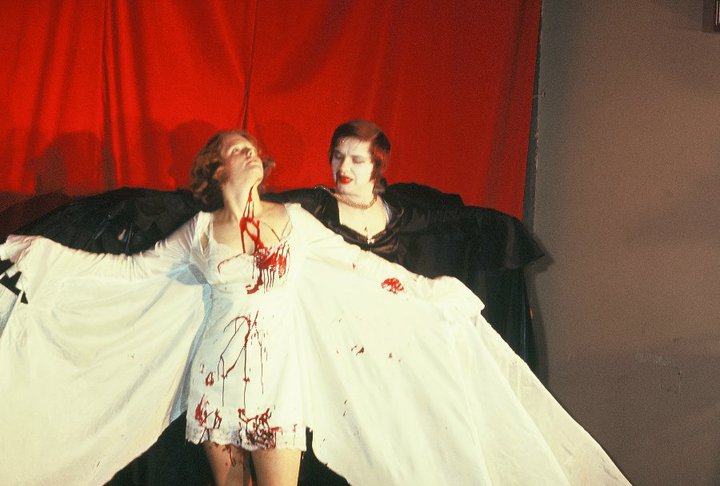 Astrid and Karen Anderson as “The Bat and The Bitten,” 1969 Worldcon. Photo by Mike Resnick, used by permission.

“The Bat and the Bitten” Astrid Anderson & Karen Anderson delivered a truly chilling performance as a vampire sires a new acolyte. Astrid is the victim in a white mini dress who transforms as the vampire envelops her in her huge black wings and secretly squirted Astrid with a homemade mixture of gelatin, red ink & yellow food coloring so that after the bite, Astrid opened her 14 foot white wings to reveal the blood that ran from her neck and down her dress to a horrified audience. It is still considered one of the best performances to this day and it was awarded both the Grand Prize & Judges’ Choice.

In 1988, costume fandom presented an award for lifetime achievement to Karen Anderson at the Worldcon, Nolacon II (New Orleans). This was the first such award, ever. It is a forerunner of the ICG Lifetime Achievement Award.

Karen had an avid interest in daily life throughout history and in different cultures, especially cooking as shaped by culture, available tools, and local or imported ingredients.

Her interest found a perfect outlet in the Society for Creative Anachronism, started in 1966, of which she, Poul, and Astrid were founding members. She remained active in the SCA for many years, once serving as “herald of the known world.” As late as 2010 she still officered a local organization as Baroness of the Angels.

Karen and Poul joined the Los Angeles Science Fantasy Society in 1967. She had earlier made her mark in LASFS history by appearing in the fannish film The Musquite Kid Rides Again (1960), based on a story from Lee Jacobs’ fanzine The Ballard Chronicles,  She moved back to the LA area after Poul died in 2001, and regularly attended club meetings for several years. She won the club’s Forry Award in 2010 for lifetime achievement in sf.

Karen was also a Sherlock Holmes fan, who co-founded a Holmes society with a couple of friends in 1959. The affinity continued all her life. She was made a member of the Baker Street Irregulars in 2000, receiving her investiture as Conan Doyle character Emilia Lucca.

Karen was an extraordinarily bright and talented person who made towering contributions to fandom and the sf field.