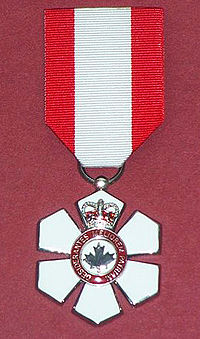 Fantasist Guy Gavriel Kay and astronaut Chris Hadfield are among the latest appointments to the Order of Canada.

Established in 1967 by Queen Elizabeth II, the Order of Canada is awarded for outstanding achievement, dedication to the community and service to the nation. There are three grades: Companion, Officer, and Member.

Canada’s singing astronaut and YouTube sensation Chris Hadfield was named an officer of the Order of Canada.

Guy Gavriel Kay, appointed a member of the Order, while a young man helped Christopher Tolkien edit The Silmarillion, J.R.R. Tolkien’s posthumously published prequel to the Lord of the Rings. Kay’s own first novel, The Summer Tree, the beginning of The Fionavar Tapestry, came out in 1984. In 1990 his novel Tigana reached the Canadian bestseller list, his next book, A Song for Arbonne, debuted in the number-one position, and his subsequent novels have all been bestsellers.