By Steve Vertlieb: Here’s my look back at the three major motion picture productions of King Kong, encompassing the beloved original 1933 RKO classic, a primeval variation of “Beauty and the Beast” created by Merian C. Cooper; John Guillermin’s ill-fated 1976 remake from Paramount Pictures; and Peter Jackson’s massive, spectacular 2005 release. As Kong: Skull Island commences its own singular assault on movie theaters across the world, let’s take another affectionate look back at the evolution and history of…”Kong, the Eighth Wonder of the World.” 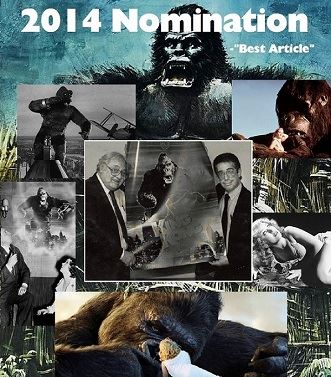 “The Girl In The Hairy Paw,” edited by Ronald Gottesman and Harry M. Geduld, published by Avon Books in 1976, was actually the very first book ever devoted in its entirety to Merian C. Cooper’s immortal 1933 motion picture “King Kong.” “The Making of King Kong” by Orville Goldner and George Turner preceded it to the marketplace, but “The Girl In The Hairy Paw” had been in production and development since 1972 when it had originally been scheduled for release by Prentice Hall. A change in management at the publisher scrapped the then imminent release, and sent the book’s editors looking for a new publisher. Both Harry and Ron had seen my own series of articles concerning the evolution and production of King Kong in the premiere issue of the New York tabloid The Monster Times, and visited my home in Philadelphia to talk with me about adapting my work for a more formal inclusion in their forthcoming volume, which was to be the first book ever devoted exclusively to the immortal fantasy adventure thriller. Finally, Avon Books in New York City purchased the rights to publish the book with exclusive pictorial content largely derived my own collection of King Kong memorabilia, and the beloved volume reached book shelves at last in 1976. 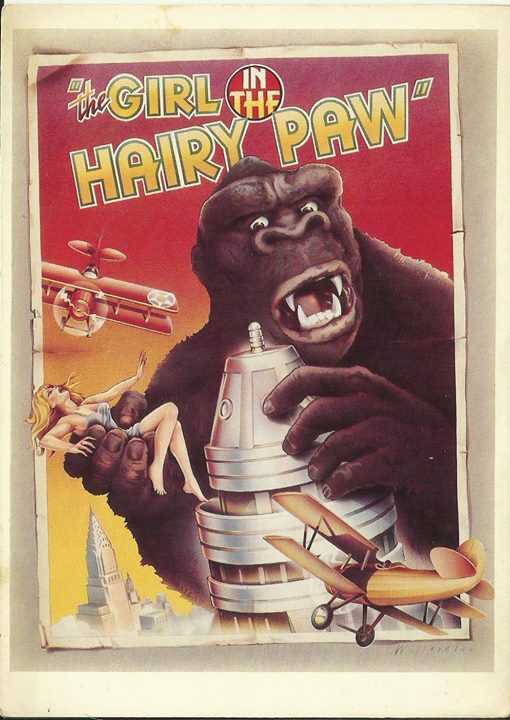 This was my first professional gig, writing the cover story for the premiere issue of The Monster Times, a then experimental bi-weekly tabloid newspaper, published in New York City by Larry Brill and Les Waldstein, edited by Chuck McNaughton, and devoted exclusively to horror, sci-fi, fantasy films. This was Gray Morrow’s spectacular cover art for the 1972 debut of the beloved tabloid, featuring the beginning of my series of articles (“The Men Who Saved King Kong”) chronicling the making and production of the greatest “Monster” movie of all time…the original 1933 King Kong. I later formalized and polished my essays on “Kong,” which became the lead chapter for Avon Books’ groundbreaking 1976 volume, The Girl InThe Hairy Paw. 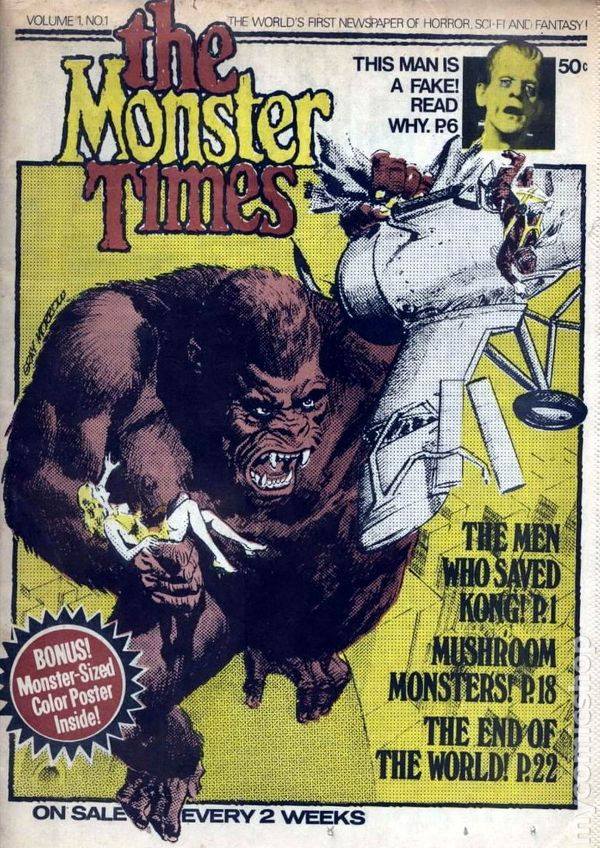 Spent a delightful afternoon with Fay Wray in her Century City, California apartment in the summer of 1975, during which time we talked about everything related to her most cherished film, the magnificent King Kong. She delighted in recounting tales of the filming of her most famous motion picture and signature performance, and was quite willing to discuss both Merian C. Cooper and Robert Armstrong, but declined to talk about her romantic lead in “Kong,” Bruce Cabot. On a related note, Cabot was the only member of the starring team of performers not mentioned at the conclusion of the end credits for Peter Jackson’s 2005 remake of “King Kong.” 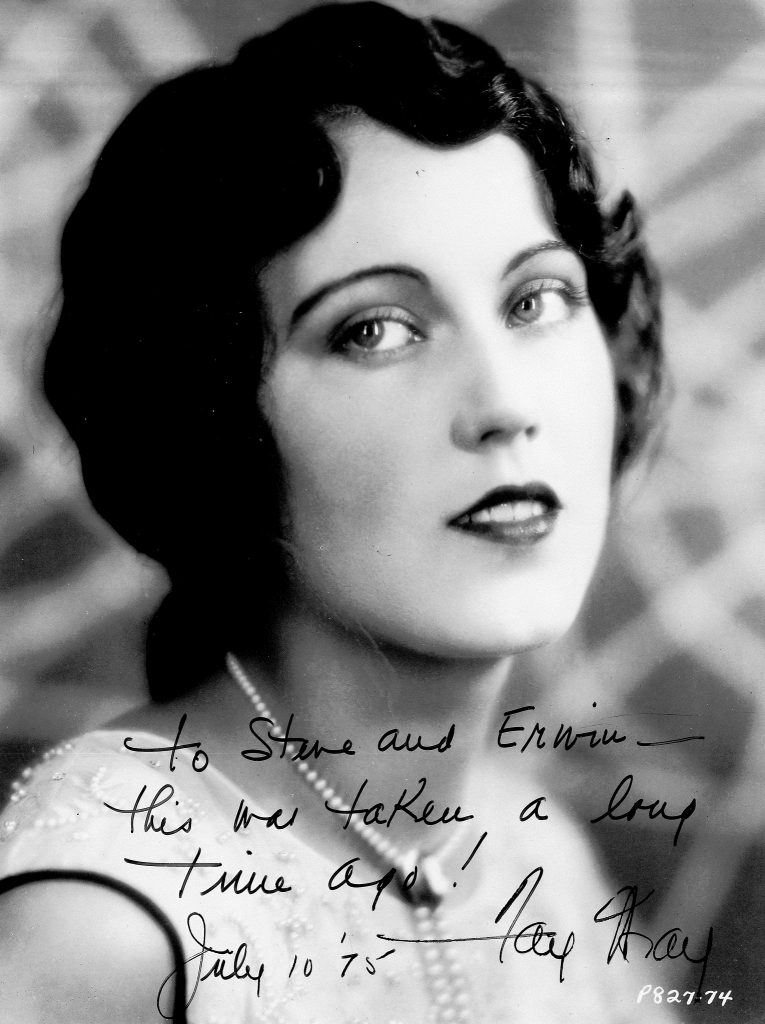 One of the giants of cinema, and founders of early filmdom…the head of RKO Studios upon the departure of David O Selznick…Brigadier General in the United States Airforce…war hero…reporter for the New York Times…co-founder of Pan American Airlines…adventurer/documentary film maker…co-producer and partner of John Ford…and the creator, producer, author, and co-director of the original King Kong… Merian C. Cooper. “Coop” and I maintained an intense, intimate correspondence for the last eight years of his life. After his death, I shared a memorable afternoon with his widow, Dorothy Jordan, and son Richard Cooper, looking over rare “Kong” memorabilia, including his original shooting script for the picture cluttered with his handwritten notes and instructions, and the famous illustration given to “Coop” at Christmas, 1932, by the cast and crew showing the director in caricature yelling “Make It Bigger…Make It Bigger.” 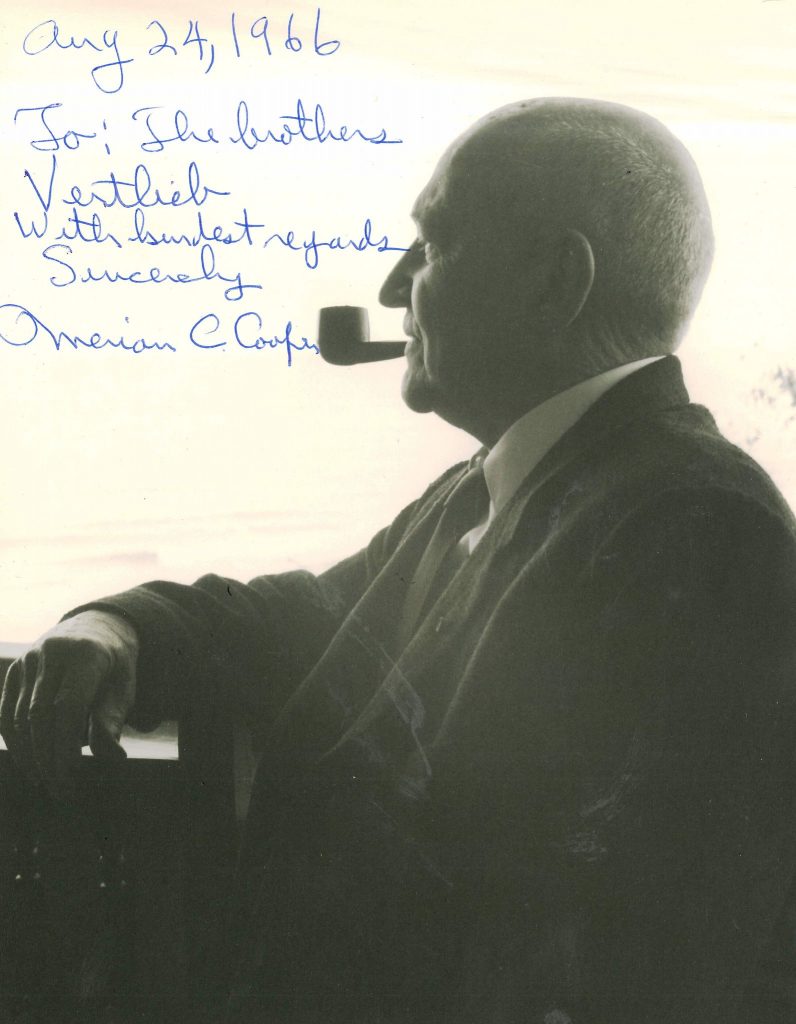 A personal inscription from the creator, co-producer and co-director of the original King Kong in which he amusingly relates that he was, in fact, the “Old Arabian” who authored the legendary proverb which so tantalizingly opens the film…”And the beast looked upon the face of beauty, and stayed its hand from killing, and from that day forth was as one dead.” 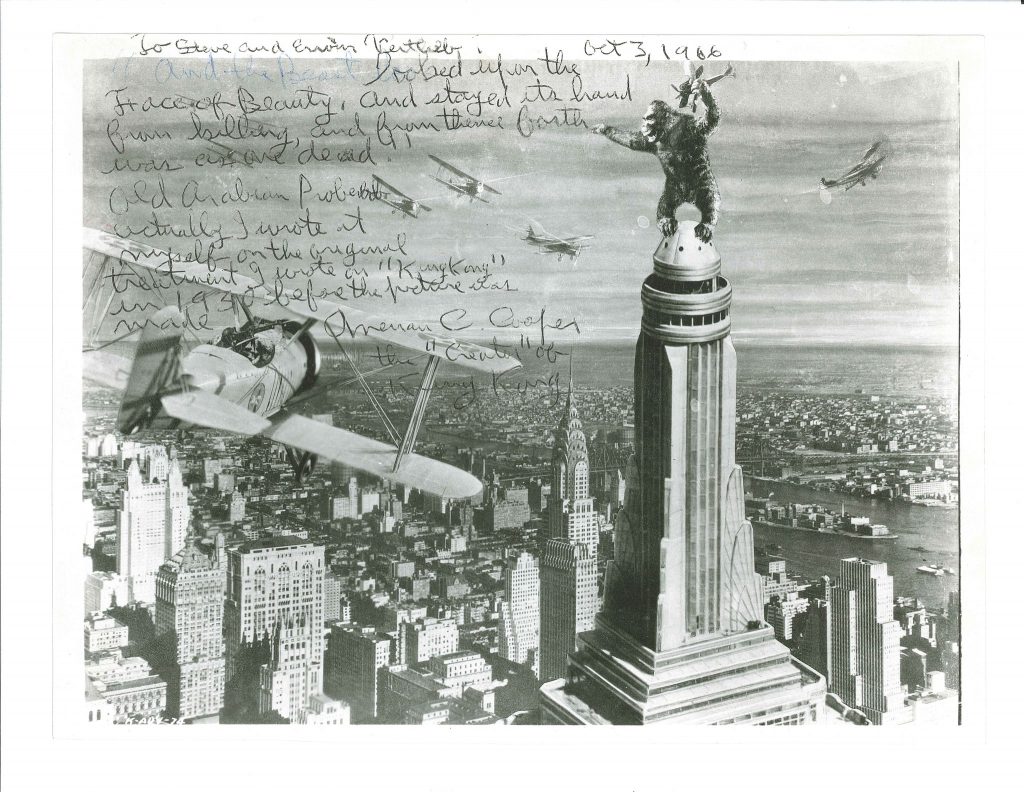 A personally inscribed autograph from the great Merian C. Cooper, the creator of King Kong. 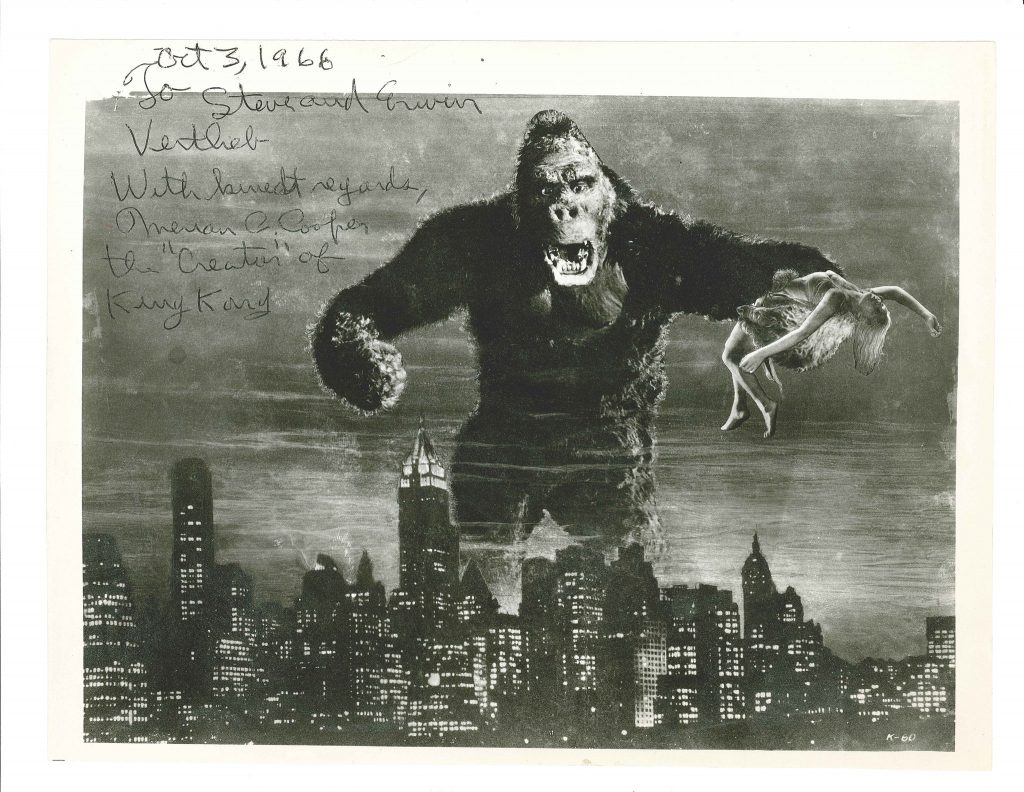 With beloved King Kong historian and American Cinematographer journalist George Turner when George and I were the invited guest speakers at the sixtieth anniversary King Kong retrospective held at The Gateway Theater in Chicago during the Winter of 1993. Co-sponsored by Turner Entertainment, the well-publicized event drew some five hundred fans to the anniversary screening and presentation. George was a truly lovely man, and brilliant film historian. We shared the stage that day so very long ago in 1993, answering questions about “Kong” from the enthusiastic audience, and screening a wonderful print of the movie on the giant Gateway Theater screen. George and I stayed at The Chicago Hilton over that memorable weekend, just days after Harrison Ford, Tommy Lee Jones, and the crew of The Fugitive had departed the hotel. 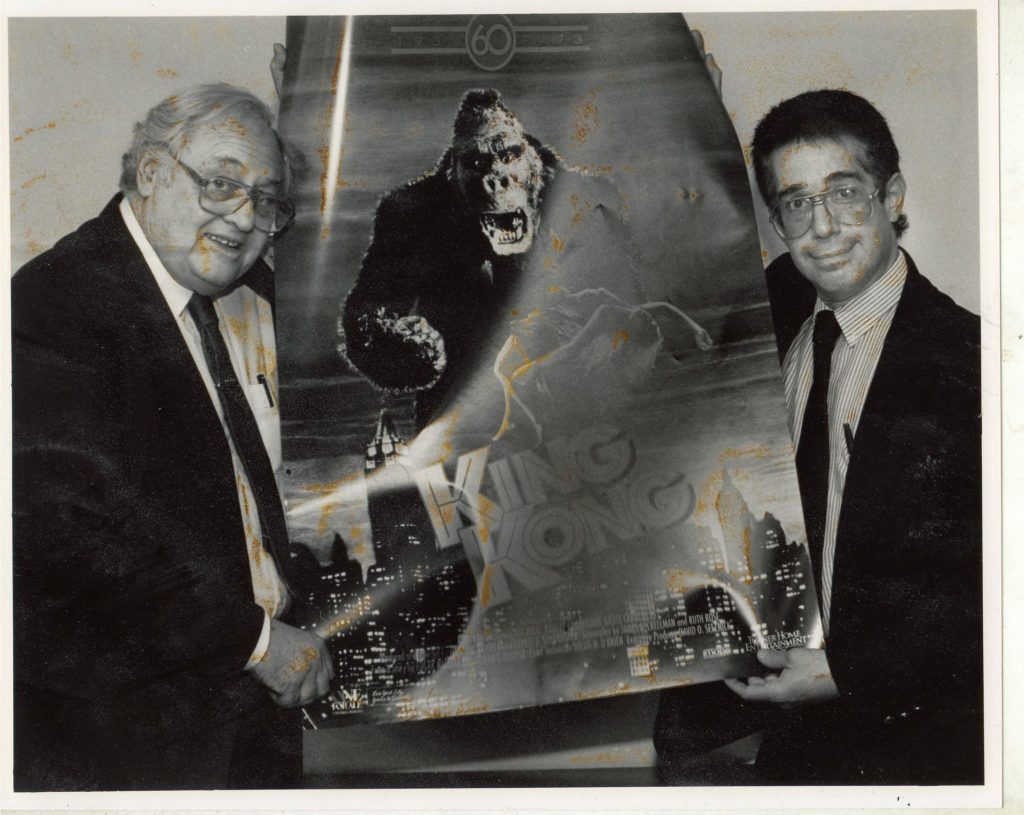 With the new big budget re-imagining of King Kong opening across the country, here’s an early drawing by artist Tim Johnson which accompanied an article I’d written for a 1977 issue of George Stover’s Black Oracle Magazine, concerning Paramount’s disastrous 1976 Dino De Laurentiis remake of “Kong.” Tim was kind enough to illustrate the striking cover art for my tongue in cheek critique of the ill-advised film, which I so aptly titled “Twas Dino Killed The Beast.” Tim’s stunning portrait, specially commissioned for our magazine those forty years ago, was a spectacular precursor of the talent and career that this gifted artist would become recognized for over the ensuing four decades. 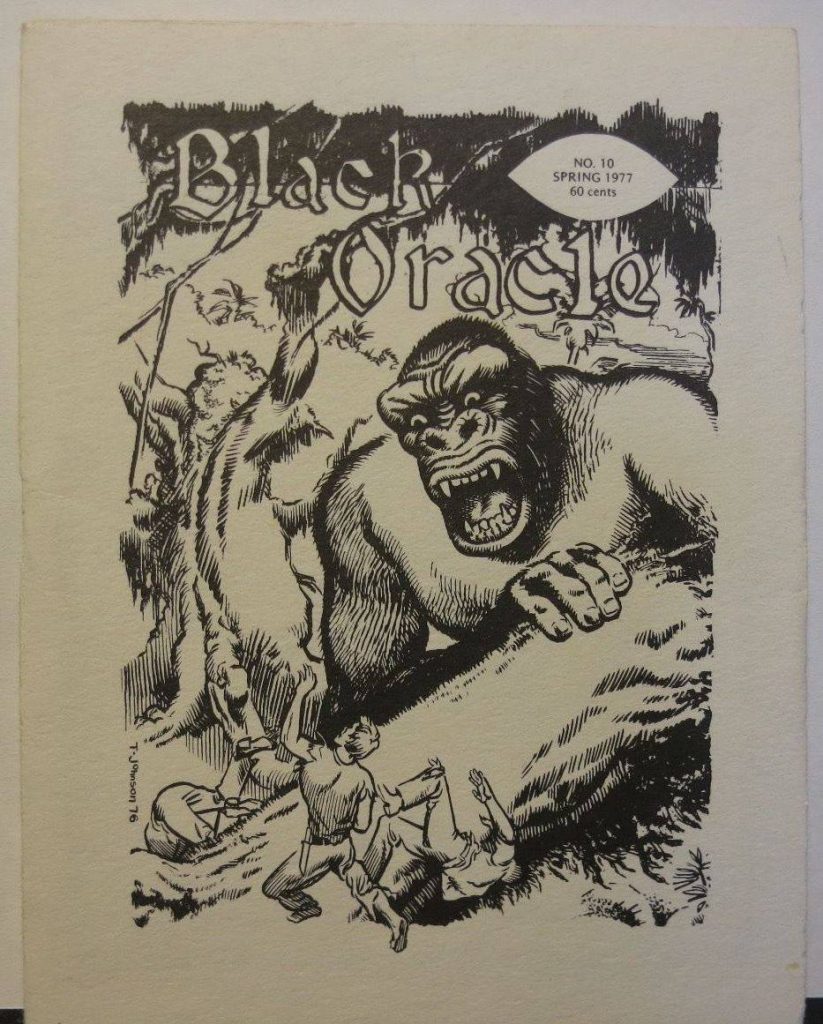