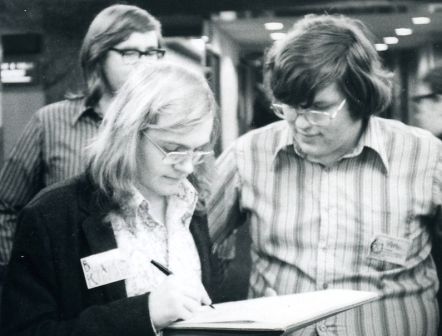 Bill Kunkel, left foreground, with Dan Steffan, right (and Frank Lunney in rear) at the 1970 Lunacon. Photo by Andrew Porter.

Nominations are being taken for the inaugural Kunkel Awards for Video Game Journalism through February 14, 2016.

Why Kunkel? While Kunkel’s name registers with me as a fanartist who drew cartoons for Arnie Katz’ Focal Point in the 1970s, another Kunkel and Katz collaboration, the “Arcade Alley” column in Video magazine, helped invent video game journalism, as the New York Times declared in Kunkel’s 2011 obituary.

The Kunkel Award winners will be selected by a two-step process: the entries will be nominated by the public, and SPJ judges will choose the winners.

Entries need to have been published in 2015, in English or with an available translation, and can be from anywhere, from a national website or a personal blog.

The judges will be “professional journalists working outside the gaming press, but with varying degrees of knowledge about it.”

The judging criteria will be accuracy, balance, clarity, verve, and being true to the SPJ Code of Ethics.

The awards are the brainchild of SPJ national board member Michael Koretzky, who will serve as director but not as a judge. The Kunkel Award was unveiled last week, and Koretzky says he has already received 104 nominations representing 33 websites and webcasters.

Where does Koretzky fit into gaming journalism’s controversy-riddled landscape? He helped plan AirPlay, the live and Livestreamed forum for GamerGate proponents and opponents held in Miami last August that was interrupted by a bomb threat. He’s interested in knowledgeable and ethical coverage of the gaming field. At AirPlay participants debated such questions as:

How should the mainstream media cover controversies like GamerGate? How does a reporter interview an “online leaderless movement” and still make deadline? What should the editor know before posting the story?

Koretzky argues the Kunkel Award will fill a need for a national award for video game journalism that is evident from the field’s popularity and business handle: