With unanimous support from our City Council, the Lucas Museum is officially coming home to L.A.! Thank you, George Lucas & Mellody Hobson! pic.twitter.com/tiWx9FIYdB

The Los Angeles City Council voted 14-0 to approve an environmental impact report and other requirements needed to clear the way for the Lucas Museum of Narrative Art’s construction adjacent to the University of Southern California.

With Tuesday’s approval, plans are to break ground as early as this year and open the museum to the public in 2021. Other than the use of public land, the project is expect to be fully paid for by Lucas and his wife, Mellody Hobson.

People come to Los Angeles from all over the world to be inspired by art, and to see things they have only imagined become real through storytelling. The Lucas Museum of Narrative Art will add another world-class institution to our city’s cultural landscape, and bring a breathtaking architectural jewel to Exposition Park. I am proud to have worked with George Lucas and Mellody Hobson to bring this incredible gift to Los Angeles — and I applaud the City Council for voting to approve a gem for South L.A. that will touch the lives of Angelenos and visitors for generations to come.

After failing to win permission to build on the grounds of the Presidio in San Francisco, and being blocked by litigation from accepting a lakefront site in Chicago, Lucas had simultaneously offered the museum to Los Angeles and San Francisco, a competition that depended in part on which city could get the museum through its legal approval process most quickly. LA won out.

And then we said, ‘All right, let’s clear the boards and find a place that really wants it.’

The museum’s website says the facility “will feature a bold new architectural design and will be a one-of-a-kind gathering place to experience collections, films and exhibitions dedicated to the power of visual storytelling and the evolution of art and moving images.”

The museum collection will began with a large gift from the founders:

The Lucas Museum of Narrative Art will be in Exposition Park near the Natural History Museum of Los Angeles County, the California Science Center and the California African American Museum. 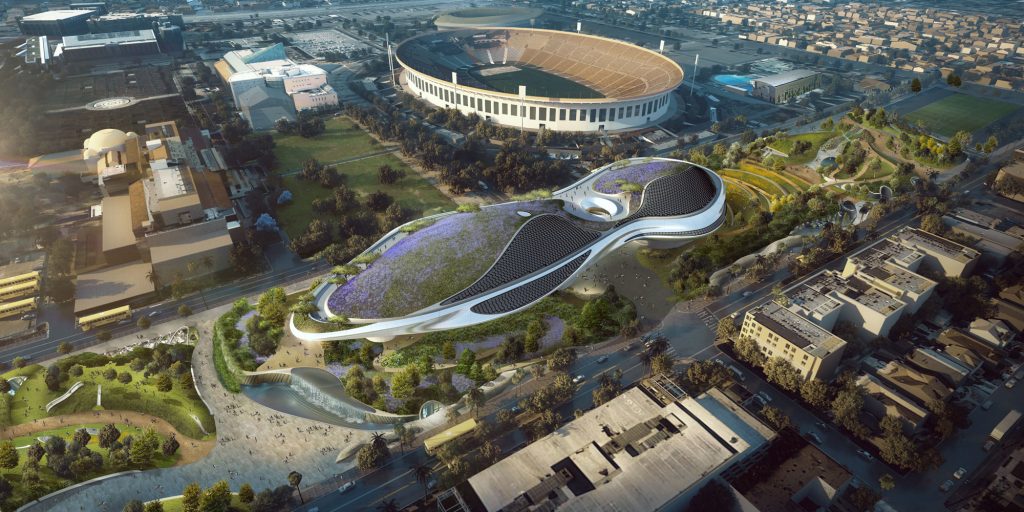