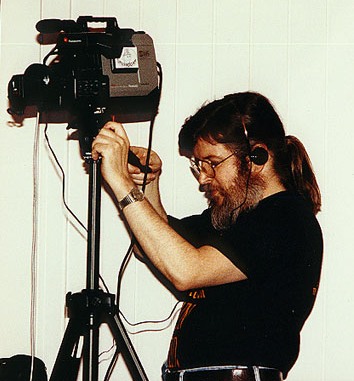 By Ro Nagey: Larry Tucker died October 8, 2013. Crippled by strokes and other attacks, his body finally gave up today.

I imagine a lot of the people that are in the Stilyagi Air Corps, the Ann Arbor Science Fiction Association (AASFA), the ConFusion sf con and the Science Fiction Oral History Association (SFOHA) might never have met Larry or know his enormous influence on those organisations and fandom in general. Even more likely, you never got to know this incredible clever, funny, involved human being that I was lucky enough to know. If there’s one thing I wish to communicate is the awesome human being he was.

I met Larry Tucker at the very first ConFusion back in 1975. As chairperson, I can tell you that none of us knew what we were doing. It was like having a three-day nervous breakdown. We had great fun and learned a lot – we must have as ConFusion, (the successor to the A2 Relax Icon held in ’74), is celebrating its 40th anniversary in January, 2014.

It was on Friday when Larry and Zita Kutkus came up to me in the programming room and introduced themselves. They were dragging all this video equipment with them. This was the early 70’s. They had a Sony Portapak ½” reel-to-reel video tape deck, a state of the art black-and-white camera, a monitor, a tripod and seemingly miles of cables and cords. They asked to videotape what we were doing.

I don’t remember my answer. I bet I said “no.” I was so over my head in running the con that I didn’t want another ball to juggle. I wish I hadn’t. It was an amazing con in so many ways. I would kill to have a video of that con. We had hoped for perhaps 100 people based on the previous year’s numbers. Over 300 people had shown up by then with more on the way. There’s a fine line between Chaos and Confusion and we were balancing on that thin line.

But that was Larry’s entrance into my world. As a result of being at ConFusion, he joined the Stilyagi and threw himself into fandom at large.

Larry changed my life and he changed fandom. Larry had the most interesting energy about him. He saw bullshit for what it was and could – in a single comment – both capture the bullshit, kill it and make fun of it at the same time. The thing was: most people didn’t notice what he was doing. He had this natural humour about him that shielded him from criticism.

It was such an effortless sense of humour. It was like he was able to see the Universe’s Big Jokes and could share them with us. Whether at Stilyagi meetings or the inevitable meeting after the meeting at the Village Bell – whether at parties at homes or at cons – Larry could spot where he needed to be to keep the Stilyagi and its incredible mixture of diverse people together. It was an art, a dance. And I only realised this much, much later in life.

Larry was the prototypical Gentle Man against which the rest of us were measured.

He worked tirelessly on the cons and in promoting ConFusion at other cons. It was sort of a religion for us back then. Ann Arbor had found this amazing thing called fandom and the even more amazing people that made up the Stilyagi. We were definite evangelists back then.

It really was The Day of Giants.

Larry brought me into his world of video. His mother, Nancy Tucker (later, Nancy Tucker Shaw, ran the AV Center at the University of Michigan School of Education and we had access to the studio and could check out the equipment at will. Larry was my first and very important collaborator. We clicked. We were Yin and Yang. I was the crazy one who dreamed far larger than I had any right to and Larry – while wildly creative – was also incredibly detail oriented and kept our stuff tethered to reality.

One day, we took the ‘portable’ equipment (the batteries alone weighed like 10 pounds each and lasted for 15 minutes or so) and went out onto the Diag at the UM Campus. We did impromptu interviews. There was no plan. We were just weird people doing weird interviews. It evolved: ultimately, the interviews involved me asking people if they had heard the rumour that a black hole had hit the Earth and what their reactions were. Interestingly, only about 10% of the people knew it was a goof. The rest was pure gold.

We had no ‘vision’ when we did the interviews. Larry took the footage and turned it into “The Thing That Ate Gorgonzola University”. There is a priceless interview with a lovely co-ed who got genuinely concerned. “Where did it hit?”. I grabbed a country at random: Japan. “O, no!!!! I am studying intensive Japanese!!!” And off she went to talk to her advisor.

Although a common enough sort of thing today, in 1975 or ’76 when we made this, it was, I humbly suggest, ground breaking.

I don’t take credit for this. Yes, it was I doing the interview but it was Larry who had to lug this monstrously heavy equipment around on a hot summer’s day. It was he who figured out the camera angles. It was Larry who took the footage and made it what it became. I knew nothing about video work back then. Hell, no one did.

Larry made it all happen.

Larry recorded all of this. He did this as only he could. When people needed to feel the presence of the camera, he was obvious in taping them. At other times, he would retreat to the background and capture intimate moments. Larry Tucker had chops. In a better Universe, he would have gone to New York or Los Angeles and been famous for his incredible skills.

Again, we assembled it – with some additional studio footage involving Jerry Steele – into the “Big Bird Eats Moon” video.

We didn’t do it for any other reason than we had a blast making them.

I studied Engineering at UM and wore a train engineer’s cap for giggles. During one taping, Larry took my hat and added a pair of “Groucho” glasses (sans moustache) that I had laying around and “Uncle Albert” was born. This was Larry’s great alter-ego and he appeared in print, audio and video fanzines. To the best of my knowledge, he deserves credit for producing the first video fanzine. He produced Uncle Albert’s Video Fanzine and the cassette-taped Uncle Albert’s Electric Talking Fanzine.

His opus magnum was FAANS. It was filmed at various Midwest conventions and featured an all-star cast of fans and pros.

He also made the only known tapes of Cosmos & Chaos shows: an improvisational comedy juggling act consisting of author and fan Stephen Leigh and myself.

Larry also was a true “key” member of ConFusion. He could be counted on to pick up slack and to take on odd jobs with no advanced notice. He never complained … well, at least not to me.

Before leaving Ann Arbor for work in Cleveland, author Lloyd Biggle (our Pro GoH at the A2 Relax Icon and a Stilyagi supporter) came up with the idea for the Science Fiction Oral History Association. Larry was so on top of it from the beginning. SFOHA was dedicated to recording the history of sf and fandom. Both Larry and his mother, Nancy, helped make SFOHA a success from the very start.

Larry chaired or co-chaired three ConFusions from ’78-’80: “Confusion ?”, “E/c2 Confusion (aka Mass Confusion)” and “Confusion 6 and/or 7”. and remained a fixture on the ConCom for some time. He was the Toastmaster in 1982 at “Confusion 11” and again in ’98 at “ConFusion of the Winnebagos”. He was Fan Guest of Honor in 1988 at “Ambulatory ConFusion”.

Larry was always passionate about the Stilyagi Air Corps and ConFusion. Very passionate. There were more than a few times when his passion rubbed people the wrong way. I know this first hand as I received more than a few phone calls after I had moved to Cleveland from Stilyagis that were having issues with how Larry wanted to do things. That’s the thing about passion: it carries a price and Larry paid it in full.

And Larry was passionate about life and love. He had a few serious relationships over the years: Zita Kutkus, Leah Zeldes, Debbie Rigdon and, of course, his only wife: Misti Anslin. Larry and Misti were married from 1996–2001.

Given his last name, it was only natural that the joke was started that Larry was Bob Tucker’s son. Both had fun with this.

Nancy had been equally important in the first decades of ConFusion and SFOHA. They shared a loving and healthy relationship. The loss of his mother, Nancy Tucker Shaw, in 2000, was a huge loss for Larry.

Larry was a wonderful, funny creative person. Although I didn’t know enough at the time, looking back, I think he had depressive issues when I first met him – not crippling but I think it was a undertone that, tragically, became a major chord later in his life. He was diagnosed, much later, with depression and atypical bipolar disorder. The meds he was on apparently never worked, according to his ex-wife, Misti. His condition grew worse over the years.

The American healthcare system is barbaric and the social safety net is virtually non-existent. Over the years, Larry’s circumstances – crushing poverty due to inability to work – meant that he had to get rid of all the great creative work he had created.

He was homeless for a while. He finally found a place to live: a room in a low-rent motel in exchange for cleaning rooms and doing maintenance.

In 2011, he suffered a massive stroke. He never bounced back. In fact, it was a downhill trip from there. He had some incredible support from a small-group of friends who visited him regularly long after he was capable of communication. These were saints.

And now, Larry is gone.

I love you, Larry. I will miss you with all my heart and soul. You were one of a kind and we won’t likely see your kind again.

I celebrate his life when it was good and he was free to be and curse the Universe for when it went horribly wrong.

If you have any of Larry’s work: here’s a chance to help keep Larry’s brilliance alive! So much of his work has been lost.

If you have any of his fanzines – whether in print, on cassette tape and on video…if you have any of his videos: “Big Bird Eats Moon”, “The Thing That Ate Gorgonzola University”, “FAANS” or any of the “Cosmos and Chaos” tapes, please consider either putting them in digital form or send them to me and I will. So much of his work has been lost.

If necessary, contact me privately and I will help you get it to the right place.