I’m copying this item to File 770 (with permission) not just for the news but for its touching story of a friend's persistence.

A brief memorial will take place beginning promptly at 11 a.m. at Muehlig Funeral Chapel in Ann Arbor, followed by interment with military honors at 1 p.m. at Great Lakes National Cemetery in Holly.

Transportation from the funeral home to the cemetery will be provided for anyone who needs it. Please contact me as soon as possible to reserve.

Please pass the word to anyone who might attend. 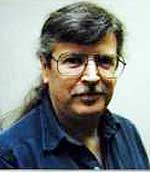 If you are in the area, I hope you will try to come to the funeral home, at least. Even if you didn’t know Larry well, science-fiction fandom owes him a lot, and he deserves a good send off.

If you can’t attend, please devote a few minutes to thinking about Larry on Friday. He was a wonderful person, and he deserved better than what fate handed him.

I am very grateful to Kevin Jacobi of Muehlig Funeral Chapel, part of the Dignity Memorial network, which is providing mortuary and transportation services pro bono, and who took on the legal red tape involved in getting Larry’s remains released from the Washtenaw County Medical Examiner’s office.

As you may know, Larry died as a penniless ward of the state of Michigan. If you die without family or friends to pay your burial expenses, Michigan will cremate your body and put your ashes into a common grave. That had been going to be Larry’s fate, too. It was already a month after Larry’s death that I found this out, thanks to Tom White of WhiteKnight Personal Services, who was Larry’s state guardian till his death, and Jennifer Hawes of St. Joseph Mercy Hospice, where Larry died.

Although it was known that Larry was a U.S. Navy veteran and entitled to burial in a national cemetery, he wasn’t going to be buried there because — as I found out after weeks of phone calls and emails — there is no agency responsible for getting indigent veterans to the cemetery. The government provides free burial for veterans. They don’t provide mortuary services, that is, preparation of the body, a coffin and transport to the cemetery.

I talked to the director of the Washtenaw County Department of Veterans Affairs, who informed me that “Both the State of Michigan and the US Department of Veterans Affairs (USDVA) have policies regarding the appropriate and honorable burial of Indigent Veterans and the Unclaimed Remains of Veterans” and that “the coordination between the State, the USDVA National Cemetery, and the Medical Examiner’s Office should be seamless….” I talked to the cemetery, to the ME’s office, to several offices of the VA and to U.S. Rep. John Dingell’s office. All of whom also assured me that there were such policies, but none of whom could tell me what those policies were or whose job it was to implement those policies. They all also assured me, however, that it was not theirs.

I reached out to my own friends and, thankfully, Mary Cruickshank-Peed, herself a Navy veteran, found out about Dignity Memorial’s charitable efforts for indigent veterans, and got in touch with Mr. Jacobi. It has taken from then till now to get permission from the courts, the state and the VA to bury Larry.