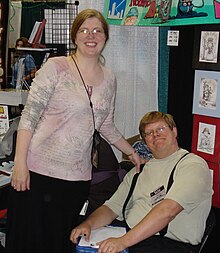 Phil Foglio is a Loscon 37 Guest of Honor. Now famed for his Girl Genius online comic, he came to early prominence as the artist who partnered with Robert Asprin in 1976 to create “The Capture”, a very funny graphic story presented at cons in slide show form that became the first faannish production ever nominated for the Best Dramatic Presentation Hugo.

Even though it’s Phil’s pro work that Loscon is focusing on, this was the reason I remembered “The Capture” today. Or tried to.

I don’t know if I’ve seen it again since 1976 when I sat in a darkened ballroom at MidAmeriCon while the images flashed by and Robert Asprin narrated. Or so I almost remember.

And that afternoon the hilarity and excitement built as the audience repeatedly and ever more loudly filled in the comic line that drives the story, which is….  Which is…

I thought I was losing my mind. How could I remember sitting in that ballroom and not remember the joke?

I thought — Man, I’m embarrassing myself here. What if fans found out this happened to me?

Just thank goodness that we have the internet. I knew Google would save me because it can always find the answer even when my question is wrong.

You know the joke about trying to look something up in the dictionary that you don’t know how to spell? It’s like that. If you misremember the catchphrase as being “no such thing as ____” there isn’t a search engine in the world that can help you.

Originally I expected Google or Bing to return the answer if I merely searched Foglio and “The Capture”, but that was too general for them to work with. That search returned a lot of websites that know a coloring book was made from the show art, or that Robert Asprin shared credit, but provide very little detail about “The Capture” itself, not even the iconic tagline. Nor is there a Wikipedia article about “The Capture”, only a reference to it on a disambiguation page, and another in the article about Foglio himself, “The Capture” formatted as one of those pathetic red-colored links Wikipedia uses when it wishes somebody would write an article about the thing, except nobody does because they’re annoyed that the last entry they did had 17 warning labels slapped on it by the Wiki guardians for bad formatting, lack of citations and halitosis.

So I recommend that if you ever find yourself in a situation where Google and Bing have failed – and with the onset of increasing age who won’t? – you should do what I did.

Once Craig reminded me about gremlins I could get any search engine to fill in the rest, just like a bank that’s always ready to lend money to people who don’t need it. “Gremlins do not exist!” is everywhere on the internet. Armed with the correct catchphrase it is no trouble at all to find thousands of references, including the concise description I will use as a closing quote, written by Jerry Pournelle as part of a reminiscence about the late Kelly Freas:

Kelly was the “star” of a famous science fiction skit called “The Capture”, based on the premise that a World Science Fiction Convention was held on a cruise ship in the Bermuda Triangle, and the inevitable happened: all the passengers were taken aboard an alien spaceship. The skit was done as a series of reports by the alien expedition commander. Most of the reports received advice from headquarters that “Gremlins do not exist,” although it was clear from what was going on with the detainees that perhaps there was a gremlin among them. It would be no favor to Robert Asprin and Phil Foglio who created this remarkable presentation to try to summarize it, and I don’t suppose it was recorded, which is all our loss.