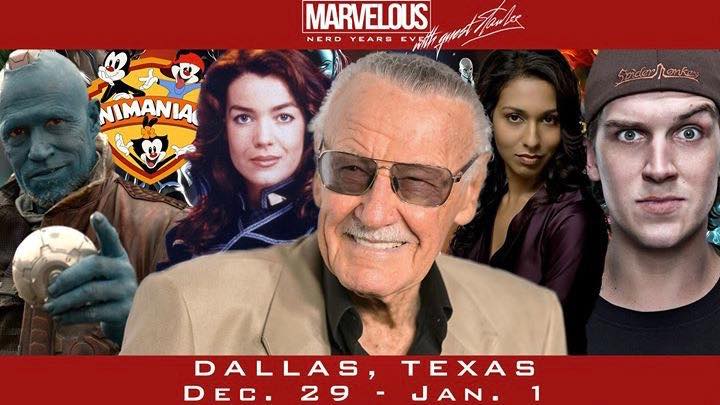 Perhaps the accursed year 2016’s last victim, Marvelous Nerd Years Eve in Dallas is the latest media con to underperform and leave behind a cloud of shortchanged celebrities.

Marquis guest Stan Lee, who received half of his $200,000 appearance fee in advance, is still owed $50,000 reports Heidi McDonald at ComicMix.

The con advertised 40 other celebrities would be on hand, including Ming Na Wen, Michael Rooker, Kevin Sorbo, Jasen Mewes, and Nichelle Nichols.

Matthew Egan, a con volunteer, wrote in a public Facebook post that “many celebrities were not paid, many agents were not paid, all employees at the show have been laid off.” He also claimed to have overheard attendance estimated at 4,000, half of what was needed to make the con a success.

As a result, the con did not meet its room guarantee. According to McDonald, “When not enough rooms were booked, the amount owed skyrocketed as rooms were then billed at a higher rate. When the guarantee wasn’t met the hotel threatened to kick people out of their rooms on Sunday unless organizers paid the difference.”

Things were settled with the hotel, but many others are still looking to get paid. Among them is David Gerrold, who detailed his experience in a Facebook post that he encouraged people to share.

I was an invited guest at the “Marvelous Nerd Year’s Eve” Comic-Con held in Dallas over New Year’s weekend.

Apparently, it was a disaster of biblical proportions. Not just dogs and cats living together, but suing each other for palimony and custody of the kittens.

The convention organizers over-promised, under-budgeted, over-extended, under-performed, and committed what I consider acts of “criminal incompetence.”

Why do I use the adjective “criminal?”

Many of the guests — not necessarily the A-listers — depend on the sales of autographs and photographs as part of their income between gigs. They are not all millionaires. Many actors and celebrities, especially those from TV shows of yore, have some income from royalties and residuals, but often depend on convention appearances to give them a little bit of a cushion — or even cover the mortgage.

So when a convention signs a contract, makes a commitment — such as, “We guarantee that you will make $5000 in autograph and photo sales, or we will make up the difference” and then fails to provide enough attendees to make those sales and then fails to cover the guarantee as well — that’s criminal incompetence.

Even worse, the company formed to put on the convention is dissolving itself, so there will be no one to sue.

Most of the other guests had their air fare covered and meals covered by a per diem. So at least their basic travel expenses were covered.

Based on their promises, I had expected $2500 and travel expenses as the bare minimum, and I budgeted for that.

Did I sell enough books and tribbles and scripts to make it worthwhile? No.

Because first, they didn’t have a dealer’s table for me, and the woman who was supposed to arrange it was more interested in talking about how busy she was than in actually making arrangements for the table. Not a bad person, but not really focused on the job.

When I finally did get a sales table, it wasn’t in the dealer’s room, it was in a second room that was carefully hidden from most of the convention membership. I did not sell enough to cover my expenses.

I am particularly angry at the CFO of the convention who lied to my face, three times — that he had a check for me for my travel expenses (I’d already turned in my receipts) — when he already knew damn well that the convention was so far in the hole that the hotel was about to lock all of the guests out of their rooms because the convention couldn’t cover the lodging bills.

Any other convention, I would have made enough to justify the effort. Instead, I have a hole in my budget that is going to create a problem for the next month or two. I had planned to spend the money on paying for the kids’ wedding pictures. Now I have to generate that cash somewhere else. (January book sale starts momentarily.)

So yes, “criminal incompetence.” People were hurt. Not just me — but every celebrity guest (over 40 of them) and every vendor (at least as many) who invested his or her weekend on the promises of this criminally incompetent group of people.

I’ve had nearly a half century of convention experience. Most of the cons I’ve attended, whether professional or fan run, have been managed well enough that fans and guests were taken care of. I have never been caught up in a disaster as big as this one. (Which is why I didn’t recognize my personal alarm bells when they went off.)

I would hope that the individuals responsible for this particular train wreck have enough class and courage to issue a public apology — but more than that, I hope they get out of the convention business, because, based on the evidence, they are a danger to the well-being of everyone who trusts them.

The event was produced by Geek Expos, and Bleeding Cool’s article about the debacle says the company is going under:

Added to a poor performance in their recent Oklahoma show, and the word was that Geek Expos is in the process of being dissolved, with firings across the company including the CEO, and future announced shows, in Dallas and Tulsa, being cancelled.