By John Hertz: [Reprinted by permission from Scientifiction, the First Fandom newsletter.]

This year’s Worldcon was Sasquan (sasquatch + convention), the 73rd World Science Fiction Convention, August 19-23, 2015, Spokane, Washington. President Coker telephoned inquiring if I would attend. Yes, I said, how can I help you? He asked me to accept on behalf of Julian May her election to the First Fandom Hall of Fame. She herself although living in the area could not attend. Certainly, I said; it will be an honor. It was and I did. 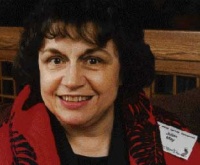 On Hugo Night after the photos and Go in peace I stayed in white tie for the round of parties and, as is customary, carried the plaque. Some folks didn’t know what First Fandom was, or the emblem, or Papa Gernsback’s word Scientifiction. I explained.

She has always spelled her name Julian, and although after marrying T.E. Dikty (1920-1991, elected posthumously in 2013) she sometimes declared copyright as Julian May Dikty, she continued to write under the name Julian May — among others, including, I’m told, Wolfgang Amadeus Futslogg, by which I dare not address her.

Her fanzine was Interim Newsletter, rendering her to some extent a surrogate for all of us. Her story “Dune Roller” was in the December 1951 issue of Campbell’s Astounding, with four interiors by herself (it was made into a 1972 film, credited to her as Judy Dikty). Eight months later she chaired Chicon II, at the age of twenty-one.

She had a career of writing short plain things that fed interest. Thousands of science encyclopedia articles for three publishers. Hundreds of books, many suitable for children and many illustrated with photos or drawings, about sports, science, celebrities including Quanah and Sitting Bull, and apartheid in South Africa.

The Triple Crown (1976) tells the stories, plenty dramatic, of all the winners through Secretariat, and you know who owned Count Fleet, don’t you?  Rockets (1967) ends “Someday it might be possible for almost anyone to leave the earth and visit another planet.” She (as Ian Thorne) did book treatments of e.g. It Came From Outer Space, the 1953 movie from a Ray Bradbury story, the 1982 book with nine photos including the cover credited to Forrest J Ackerman which I find people are still reading today.

I saw her in the Masquerade at Westercon XXIX (1976), coruscating with gems, not in competition as I recall. Only later I learned she made it and put it on to help her understand who would wear such clothing. She was thinking of writing about them. Beethoven once wrote out a Mozart string quartet by hand to help him grasp what Mozart was doing.

Lucas’ Star Wars is in fact set in the past, long ago in a galaxy far away. May wrote science fiction set in the past, not one million years B.C. but six times further back, four novels starting with The Many-Colored Land (1981) which are only the beginning of a series of eight about a Galactic Milieu through Magnificat (1996) — and there is a Diamond Mask (1994), or half-mask. John Clute says the narrative is increasingly charged with metaphysical intonations, linked to a sustaining concern with the attractive theme of psychic evolution, but I don’t write like that.

That could bring us to the Rampart Worlds, and the Boreal Moon (most recently Sorcerer’s Moon, 2006). But this, from the 1F point of view anyhow, is recent history.

I’m a hopeful man, and I hope for more. I know very few authors with whom it’s not wholly out of bounds to ask How’s your new book coming? If they feel like it they’ll tell. I’d not mind even a revision to include American Pharoah (another typo that stuck).

Just about none of this came out of my mouth when I accepted the award. I had written to ask her if there was anything she wished me to say. She answered “A simple ‘Thank you’ to the members of First Fandom will suffice.” So I said Thank you. She also told me she’d mount her plaque next to Dikty’s. People die. Art lives.

In a letter to First Fandom, Julian May recalled the 1952 Worldcon:

Local fans and pros who elected me to the con chairman job right after my “Dune Roller” novelette was published in Astounding got a signal surprise when I ran the con expertly.

The Tenth Convention was not only the best attended, it also included the big New York publishers of SF and fantasy taking booths for the first time, attracted most of the important professional authors and editors, had Hugo Gernsback as Guest of Honor, and sweet old Doc Smith as Moon Commissioner.

5 thoughts on “May the Force Be With Her”