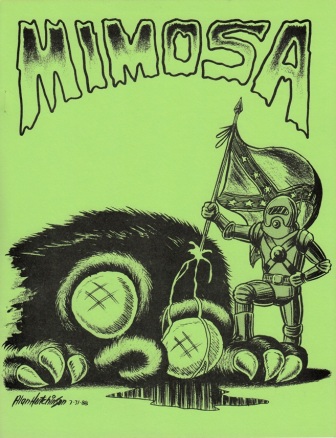 Rich Lynch announces that after a mere 27 years the 5th (yes, Filers, fifth!) issue of Mimosa (August 1988) is now online in easy-on-the-eyes HTML.

The issue contains articles and essays by Robert Lichtman, Carolyn Doyle, Greg Hills, Dal Coger, Sharon Farber, Alan Hutchinson, and Nicki Lynch.  The Farber article is the very first in her long series of “Tales of Adventure and Medical Life” stories, while Alan Hutchinson’s article is an example of that great Southern Fandom tradition, the hoax convention report (though some of it actually happened).  Robert Lichtman gives us a glimpse onto what was perhaps the most successful commune settlement in the United States (it was simply known as “The Farm”), Nicki talks about her brief career as a coffee shop barista, and Dal Coger remembers fandom’s most eccentric character, the legendary Claude Degler.  In addition to all this, a Midwestcon 39 conversation between Howard DeVore, Lynn Hickman, Ray Beam, and Roger Sims informs us on “The Awful Truth About Roger Sims”.

This was the final issue that Nicki and I published from Chattanooga, and it’s more-or-less themed as a “Farewell to Tennessee” issue.  It’s all entertaining.  Hope you think so, too.

Mimosa won the Best Fanzine Hugo six times between 1992 and 2003. With many interesting fanhistorical articles – including autobiographical series by Dave Kyle, Forry Ackerman and Mike Resnick – its website is well worth a visit.