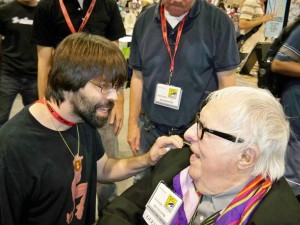 I met him in San Diego a few years ago. He was being pushed along in a wheelchair, surrounded by people who were in glory to see him, and hear his voice. We were at Comic-Con, marooned among booths selling ray guns and comic books and maps of Martian worlds. Every third person who walked by wore a cape.

“All this,” I said, pointing around us, “is your fault.” I had to shout to be heard. His hearing wasn’t good.

He laughed — it was one hell of a laugh — and nodded and said, “You know, some of it probably is.”

But he always remained, in the hearts of many, America’s greatest science fiction writer, eventually being honored by a special Pulitzer Prize for his lifetime achievement. In truth, though, Bradbury’s fantasy, horror and science fiction did more than merely entertain. In all his work, he explored loneliness and the troubled human heart and our deep-seated fear of otherness. In that regard, he became what he always wanted to be — a great storyteller, sometimes even a mythmaker, a true American classic. Live forever, Mr. Bradbury.

Five years later, a young woman who lived across the street had to wear eyepatches for several days, making her effectively blind. I went over to her house to help her pass the time. I brought that hardcover of I Sing the Body Electric. I read to her.

That was when I realized that Bradbury’s stories were not meant to be read silently. Your lips have to move, your voice has to produce those words, the cadences of his language have to rise out of your own throat.

What counted in the Whitman quote Bradbury used for his title was not the word “electric.” Not even “body.” It was “sing.”

The girl I was reading to married me. Talk about a book changing your life! (She assures me that it was me, not Bradbury, she fell in love with.)

In the 1940s, when a young Ray Bradbury began a series of stories that would eventually become The Martian Chronicles, man had yet to even send a satellite into space. Since then, six U.S.-launched landers have touched down on Mars, with a seventh, Curiosity, due to land in 60 days.

The first images sent back by Viking 1 in 1976 confirmed what scientists already knew — nothing like the advanced Martian societies of Bradbury’s imagination existed on the planet. Still, scientists are hopeful that we’ll find signs of past life; more importantly, many of them were inspired to explore Mars in the first place thanks to works like The Martian Chronicles and The Illustrated Man.

One of those people was Ashley Stroupe. She first read his work as a 10-year-old girl living in the suburbs of Washington, D.C. Today she holds a job with the charmingly prosaic title of “Mars Rover Driver.”

Interesting that the various media websites that include photos show him after he became famous, such as at the White House or at mainstream author events. But of course there are no photos of him at the many SF conventions that he attended, because back then he was just some dumb sci-fi geek/nerd.

Note: I published Bradbury’s 1986 Atlanta World SF Convention Guest of Honor speech, in the December 1986 issue of my Science Fiction Chronicle; I taped his speech and had it transcribed. AFAIK, this was the only place it appeared in print.