By Mark L. Blackman: On the evening of Wednesday, July 20 — the 47th anniversary of the first Moon Landing – the monthly Fantastic Fiction Readings Series hosted authors David D. Levine and Helen Marshall at the 2nd floor KGB Bar in Manhattan’s East Village. The Bar is known for its red walls and Soviet era-themed décor, and the Series for the excellence of its readers; readings are always free.

Series co-host Matthew Kressel welcomed the capacity crowd, exhorted us to buy drinks (generously, there is no cover charge), and reported on upcoming events in the Series. Next month’s readers, on August 17, are Leanna Renee Hieber and Theodora Goss. Reading on September 21 will be Laird Barron and Alyssa Wong; on October 19 Jack Ketchum and Caitlìn R. Kiernan; and on November 16 John Langan and Kressel himself. (Details are available at http://www.kgbfantasticfiction.org/.) Concluding, he introduced the evening’s first reader.

David D. Levine is the author of the novel Arabella of Mars and over fifty sf and fantasy stories, one of which “Tk’tk’tk,” won the Hugo Award.  Some of his stories have been anthologized in the Endeavour Award-winning collection Space Magic.  (Full disclosure:  years ago, we were in an apa, or fannish amateur press association, together.  He is, of course, not the New York gamer of that name – though, to their mutual consternation, that distinction was lost by one Worldcon’s “Voodoo Message Board” – nor the caricaturist at the New York Review of Books.)

Levine began with a well-received rap (“Ey girl, what’s your name?,” complete with background music) summarizing the plot of Arabella of Mars, then read from the Prologue, “The Last Straw.” The novel is set in an alternate cosmology (or alternate astrophysics) previously described as “Mars the way it used to be before science ruined it,” with canals, Martians and breathable atmosphere (Venus, of course, has swamps), a reality – a term here used loosely – in which further there is interplanetary atmosphere and airships voyage between worlds.  The heroine, Arabella Ashby, an 18th-century English colonist on Mars (the use of “Marsman,” to distinguish from Martians, was employed as well in a similarly titled novel about a girl named Podkayne), we learn, has been hauled off to Earth and urgently must return to Mars to save her family fortune.  In the final part of his presentation, Arabella is attempting to do just that, disguised as a boy among an airship’s crew as it lifts from London.  Venerable literary devices blend imaginatively and charmingly. 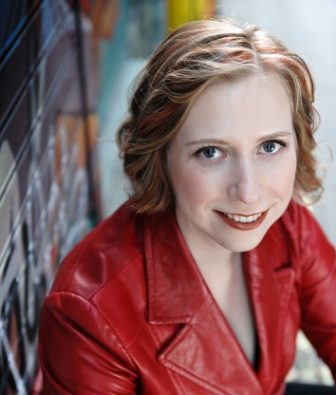 After a break, Series co-host much-honored editor Ellen Datlow introduced the second reader of the night. Helen Marshall’s first collection of fiction, Hair Side, Flesh Side, won the Sydney J. Bounds Award in 2013, and her second, Gifts for the One Who Comes After, the World Fantasy Award and the Shirley Jackson Award.  The story that she read, “The Embalmer,” appears in The Mammoth Book of the Mummy, though, as she described it, it’s “the least mummy-like” story that she could write.  It was nonetheless quirky and amusing.  The boy Henry has a penchant and talent for digging up and mummifying neighbors’ dead and buried pets, including the girl next door’s (Dalia), late Labradane, which he’s anonymously gifted to her and which she smuggles to school.  (We must count it as fortunate that her little brother was not buried in the backyard.)

Copies of Arabella of Mars and Gifts for the One Who Comes After were for sale at the back of the room from the Word Bookstores of Brooklyn and Jersey City.

Afterward, the crowd headed out to dinner.