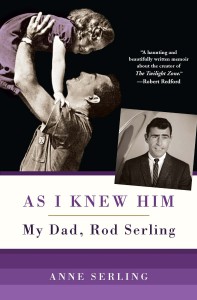 Anne Serling is interviewed about her memoir As I Knew Him: My Dad, Rod Serling in the May 29 issue of the LA Times.

Part of the soundtrack for her promo video comes from Mike Wallace’s interview with Rod Serling, first aired in 1959. The most eerie thing in the interview has nothing to do with Twilight Zone — it’s seeing both men puffing away on cigarettes behind the opening title.

2 thoughts on “My Dad, Rod Serling”