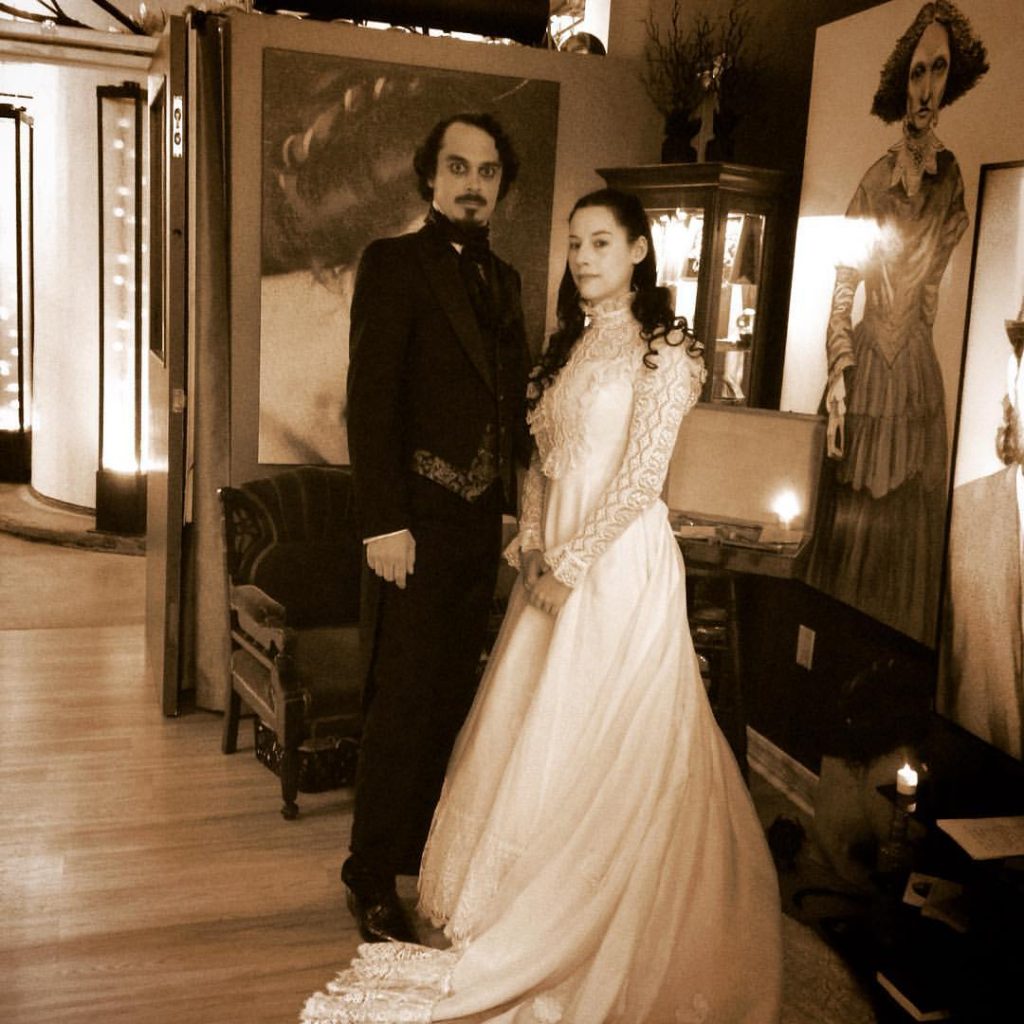 By Martin Morse Wooster: I’ve been in many strange places in my lifetime.  But I spent the night of September 12 in an insane asylum!

Well, it wasn’t really an insane asylum.  It was the Torpedo Factory Arts Center in Alexandria, which was transformed into an asylum for “A Dream Within a Dream: Madness” which is being held there through October 31.

I would say that this was a play about Edgar Allan Poe, except that I learned from the website of the company that produced it, Through the 4th Wall, that what they do is produce “immersive transmedia” which is at “the avant-garde branding intersection of advertising, P.R., and immersive performance.”

The premise of this story is that Edgar Allan Poe, mourning the death of his child bride Virginia (but is she really dead?) has checked in to the Maison de Sante, which I think is French for “House of Creepy.” There he wanders the grounds, and when we don’t see Poe, we see his stories come to life.

The mostly female cast were dressed in costumes similar what I would imagine are those at the World Horror Convention costume contest.  Or maybe they were looking forward to the World Crinoline Convention.  Or perhaps they were extras in the PBS Civil War drama “Mercy Street,” set in Alexandria.

One woman, who didn’t have a speaking part, was dressed in a black leotard, with a scary black wig, owl eyes, and a lot of white pancake makeup.  I nearly asked her, “say, have you dated the Joker?”  But I restrained myself.

The arts center was quite dark.  Dirges by Beethoven played in the background, with the soundtrack of an occasional burst of thunder.  We divided into eight groups and duly climbed up and down three flights while listening to the music and stopping at various sections of the arts center to see various skits depicting Poe stories.

One of the skits featured Poe, who railed about the loss of Virginia (if she was dead!), and asked us to write the names of our deathless loves on a wall.  Virginia Poe was in another section and talked about how she mourned Edgar.

Other sections had skits depicting various Poe stories.  Some of them were pretty obscure.  I’ve never read “The Imp of the Perverse” or “William Wilson”, but they were retold here.  One sketch was about a painter who had to work on a portrait of his girlfriend forever because he could never fully capture her ethereal beauty.  Still another had twins (if they were twins!) where one twin endlessly repeated what the other one was saying.

While we were escorted from one station to another, the escorts talked to us.  “Have you ever had an immortal love, one you would remember for your entire life?” one woman said.  But I remembered we were immersed in the nineteenth century, an age that did not know the meaning of “oversharing” and “too much information.”

Another woman played the part of Rosalie Poe, Edgar Allen Poe’s sister.  “Have you heard of my brother, Edgar?  He’s a writer.”

“No, anime,” said someone else in my group.

We were given programs afterward, so I know the production was created by Jennifer Schwed and Doug Bradshaw, and starred Ian Blackwell Rogers as Edgar Allen Poe and Bette Cassatt as Virginia Poe.  Both were acceptable, although Rogers would have been more persuasive if he used half as much eyeliner.

As for “immersive transmedia,” what this really was was a play with LARP-like elements.  I went with a Groupon and got my money’s worth.

What this reminded me of was the World Fantasy Convention in 1980, when we went to Edgar Allan Poe’s grave.  Fritz Leiber recited Poe poems with his excellent voice.  We learned that the founders of Baltimore were Rosicrucians and Masons who liked being buried in mass graves, including a giant pyramid.  We were allowed to look inside these tombs and saw dozens of cobweb-covered skulls falling out of centuries-old coffins.

Now that was creepy.

3 thoughts on “My “Immersive Transmedia” Experience with Edgar Allan Poe”