The Rotsler Award, named for Bill Rotsler and given annually for long-time wonder-working with graphic art in amateur publications of the s-f community, is announced at Loscon, with an exhibit of the winner’s work in the Art Show. The current judges are Mike Glyer (since inception, 1998), Sue Mason (since 2015), and me (since 2003). Tech wizard Elizabeth Klein-Lebbink helped me build an exhibit for this year’s winner, Jeanne Gomoll.

We included some of her work for Janus and its successor Aurora; Chunga; the Tiptree Award. The Rotsler is sponsored by the Southern California Institute for Fan Interests (yes, that spells SCIFI; pronounced “skiffy”). 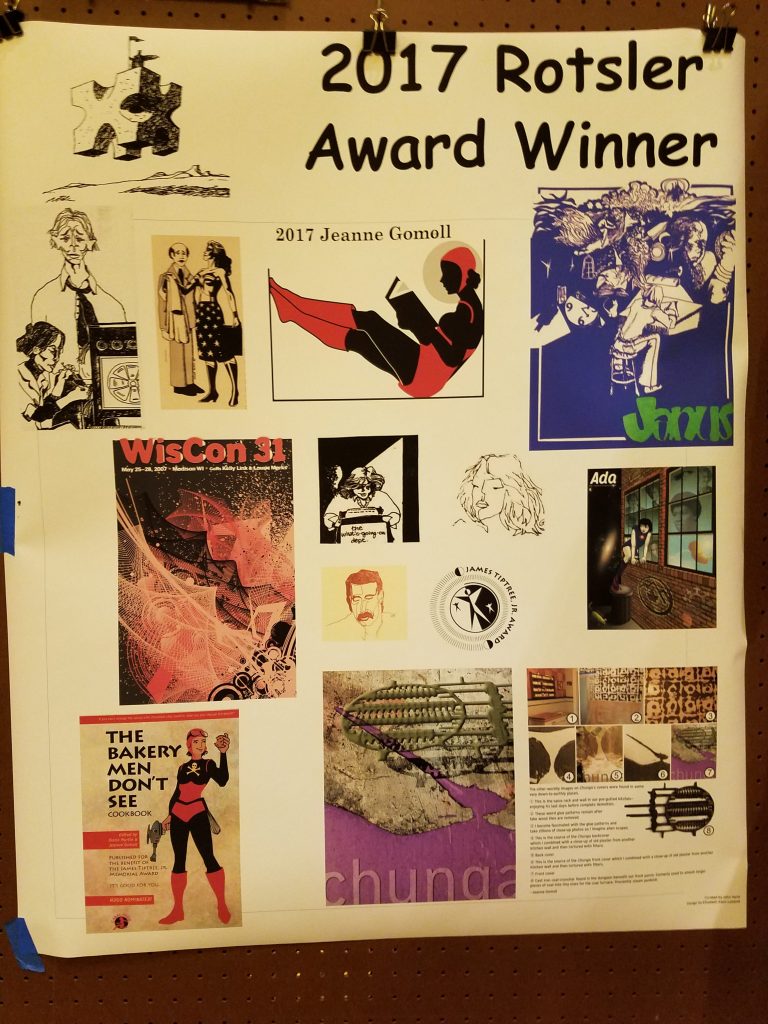 I led three Classics of S-F book discussions, trying to rouse consideration of the books, letting go for the moment their “messages”, “relevance”, politics, authors’ lives, which need no help from me, and can even constitute a distraction. When you’re trying to grow wheat, a rose is a weed.

Friday at 1:30 p.m., a reading-aloud session with Will Morton. He and I had done this before and agreed to do it again. He thought we might as well read from this year’s three Classics, to which I’d no objection. Few present had read or heard of them; none had looked at the con Website or here to see what they might be: we asked; people said they’d come to our reading-alouds before, or had heard they were fun.

Will and I took turns. Between excerpts we talked of this great but now somewhat neglected art. From the audience, “I’m a teacher; I read to students; I’d never thought of reading to adults” who were quite capable of it for themselves.

In it three men find a land populated only by women for two millennia; a woman bore a daughter parthenogenetically, which bred true: we were willing to suppose that plausible as of 1915. The visitors keep discovering that various “natural” customs or tendencies are treated otherwise or don’t exist: men’s nature, not human nature.

Did the author make a story of this sermon? If so, how? There isn’t much conflict, but there’s event; there’s looking for this led us to look for that and we tried this which didn’t work so we turned to that; there are distinct viewpoints; the characters change; and there’s a light, sometimes comic touch. As I’d hoped, women in the discussion were very helpful.

Regency Dancing, which always reminds me of I learned much from my teachers, more from my students. Sometimes I can open the door of dance for those to whom it seemed closed; as a fan I’m fascinated by cross-cultural contact: John Campbell and Larry Niven have both said the heart of s-f is Minds as good as you but different.

This period two hundred years ago, a short span in human history, is different enough from us that trying to dance as in its ballrooms (why? see e.g. my article in Mimosa 29 “The English Regency and Me”) amounts to meeting aliens. Its ideal was the co-dominium – Jerry Pournelle had to coin this word because condominium meant something else – of elegance and ease, to us so nearly unimaginable that we instinctively throw one or the other away.

Just before, while I was amid costume adventures, was the Ice Cream Social. The con committee scheduled a filk concert by Lee & Barry Gold. This while a fine idea in itself was also a ruse to bring Barry where he could be presented suitably with the Evans-Freehafer, LASFS’ annual service award. Lee had been given it some years earlier.

Saturday 11:30 a.m., a memorial to Pournelle, Len Wein, Milt Stevens, whom I list and whom we considered in their order of departure. Niven said Pournelle “was the shaping guy when we wrote together; I just came up with stuff.” That was not the time for me to say False modesty is not a virtue. Pournelle used to say “Niven writes better, I plot better.”

Laura Frankos told of sharing with Wein a love of Broadway musicals, a tribute from one whose knowledge of them is almost measureless. I told of Stevens’ career in fanzines. Nick Smith in the audience said, with him the art of conversation was important. I seeing Craig Miller about to hand over the microphone begged “Will you please talk about co-chairing a Worldcon with him?” False modesty is not a virtue. 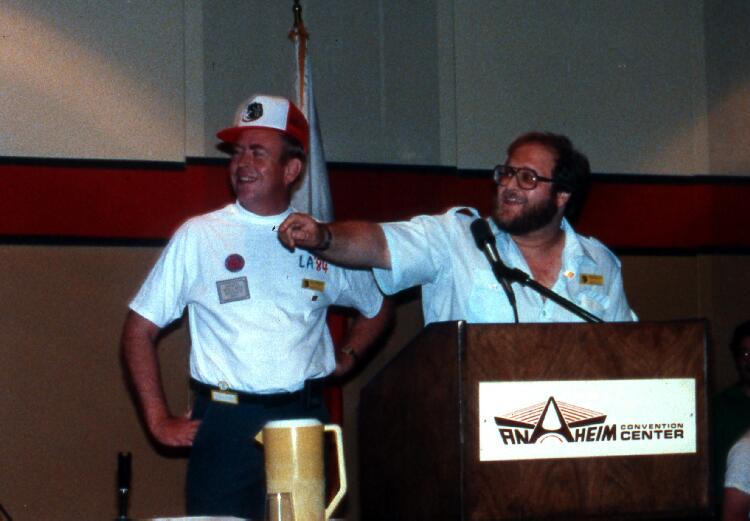 Half past two, Citizen of the Galaxy (R. Heinlein, 1957). From the audience, “It’s fast-paced.” I asked, how does he do that? Another: “It’s really four novellas.” We discussed whether there was a single story; as A.J. Budrys used to say, Always ask “Why are they telling us this?”

The vividness of the slave market illumines Leda’s relationship with John Weemsby when she tries to tell Thorby there isn’t any slavery. Although she can’t be called the protago­nist, it is she in whom a change is pivotal. The author shows Thorby’s adolescent failure to understand women, leaves for deduction what disturbs the orbit of a girl who’s got everything.

Does the book end? Or does it, in the besetting sin of s-f, build a world (or worlds!) then trail off? Will Morton said, Thorby’s character is completed, which is the end. To have present Keith Kato, President of the Heinlein Society, was an honor.

In the Art Show at Westercon LXX (West Coast Science Fantasy Conference; Tempe, Arizona, 1-4 Jul 17) I’d seen prints of remarkable pictures by an artist exhibiting as “Voit”. Pos­sibly at my recommendation the Loscon XLIV Art Show got in touch with him; he brought seven originals over his full name Vadim Voitekhovitch.

In his world of railroads, horse carriages, and great steam-driven airships, e.g. “The Road to Babylon” (oil on canvas, 2014), what impressed me most was his execution: he sets off detail with space, he paints what we know to highlight the strange, he builds on the levers our minds tend to give our eyes. 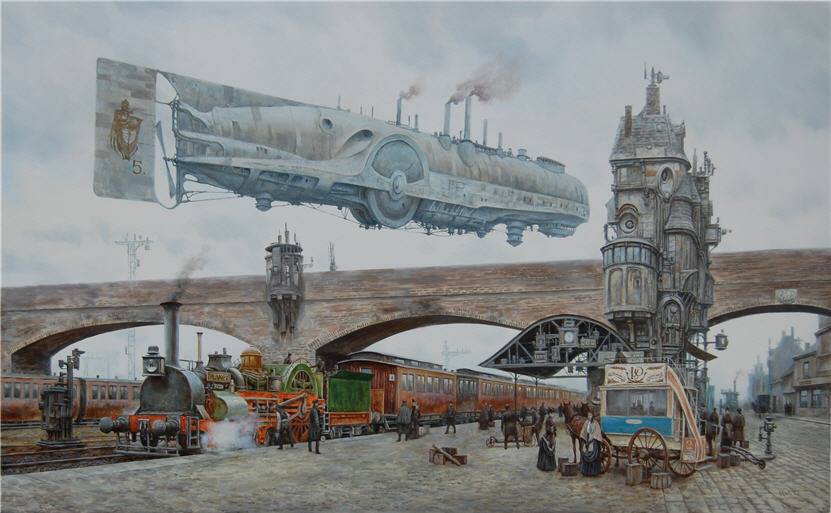 Vadim Voitekhovitch, “The Road to Babylon”

Richard Hescox, one of our best, had hand-ornamented prints with pencil drawings in the margins. Barbara Hambly brought eight gouaches on illustration-board, all Not for Sale but enriching the Art Show; focussed on their main characters (one of whom was Groucho Marx), free of the unmarshaled detail that has been perplexing many.

Mary Jane Jewell’s quilts are unusual: I can’t think of others in our field working with this medium. “The Menacing Empire” was strongly composed. I liked the big red bridge diagonally across “Images of Japan”.

One p.m. Sunday, Hard to Be a God (A. & B. Strugatsky, 1964). David P. Levine (I don’t expect David D. at Loscon) pointed out it took the shortest time of our three, all the world in a few days (or worlds; as Buckminster Fuller said, “Unity is plural and at minimum two”.)

Here was a Prime Directive two years before Star Trek, an idea of course millennia old, hence the title. Jane Shvetsov was particularly helpful, knowing Russian. I only had the new Bormashenko tr. 2014, so couldn’t ask her to compare Wendayne Ackerman’s 1973 (from Buchner’s 1971 German) which JS hadn’t seen.

From the audience, “Should Anton have been a merchant instead of a lord?” We thought he’d have had less freedom to move, and to lead – absent which his conflicting head and heart would have been harder to show.

The Soviet-era imagining of feudal folk – which for the authors’ health had better be politically correct – was fascinating, compare e.g. Twain’s Connecticut Yankee or White’s Once & Future King (including its deliberate anachronisms).

Loscon XLIV had hour-and-a-quarter sessions; we’d unexpectedly caught up with ourselves, so I asked “Anything else?” and someone said “I was hoping you’d read aloud,” gosh.

Right after (2:30), Charles Lee Jackson II moderating Andrew Trembley and me on “The Past & Future of Fan Publishing”. I cleared once & future kings from my mind, which hardly mattered because the three of us were it (not my mind – but that could be a story –). I was unsurprised; I knew, as apparently CLJ II and AT didn’t, that fanziners never attend panels about fanzining, and sometimes no one else does either.

But AT’s involvement in next year’s Worldcon was upon us, so we talked amongst ourselves about Progress Reports, Program Books which these days are sometimes Souvenir Books, at-con newsletters, publicity (Marty Massoglia quotes my sad “It was very well publicized to the people who were already going”), paper & electronics, and like that.

This kept us well occupied and must have been interesting because Dave McCarty dropped by and stayed.

I had lots of questions, some along the lines of “How hard can it be?” – remembering Indiana Jones having said that flew an airplane into a cliff (Temple of Doom, 1984) – also, speaking of 1984, I’d done the Progress Reports (which stank) and the Program Book (which I think still looks good) for the Worldcon that year, with much less powerful tech, more cumbersome? or less? ha ha ha. I’d better stop there.