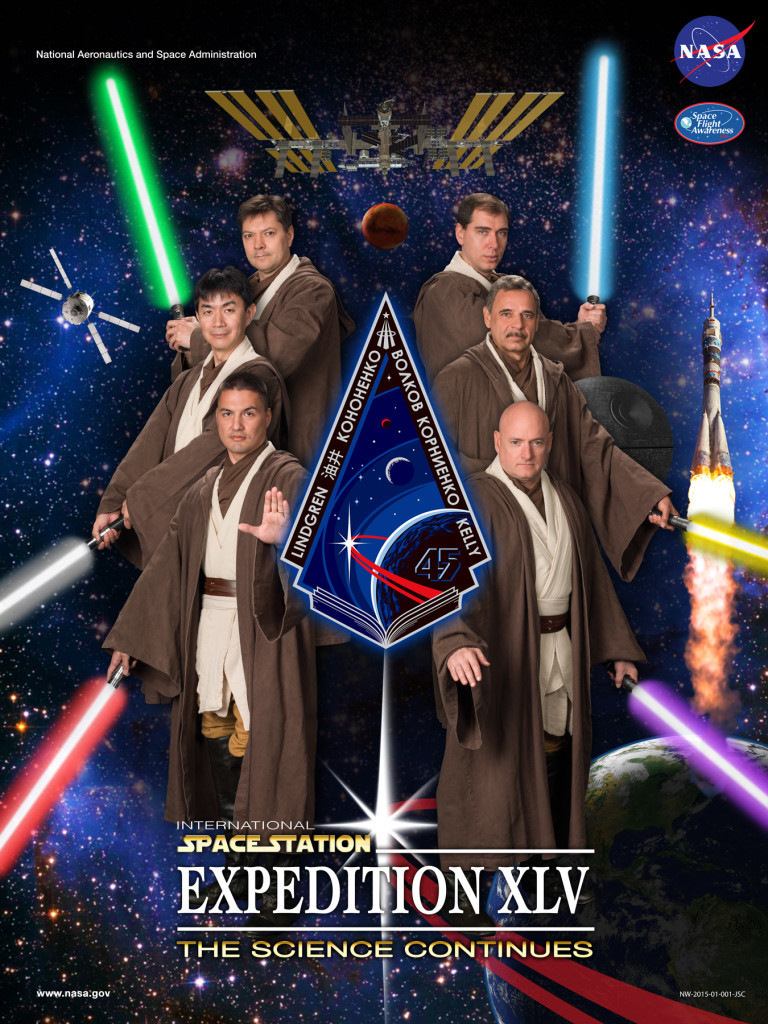 Lindgren is the Jedi on the front left.

Sasquan has announced NASA Astronaut Dr. Kjell Lindgren will participate as a Special Guest of the 2015 Worldcon while aboard the International Space Station serving as a Flight Engineer for ISS Expedition 44 and 45.

Lindgren is a board-certified practitioner of emergency medicine and aerospace medicine and holds a Doctorate of Medicine from the University of Colorado.

His work on board the International Space Station will include conducting a variety of experiments involving crystal growth, zero-g combustion and robotics.

Sasquan is proud to announce NASA Astronaut Dr. Kjell Lindgren as a Special Guest! Dr. Lindgren will be participating both in Sasquan and as a Flight Engineer on the International Space Station Expedition 44 and 45. For the first time in Worldcon history, we will be in real-time communication with a member of our community – out of this world!

Kjell Lindgren was born in Taiwan and went to school in England and Virginia; and he currently calls Texas home. He is a family man, enjoying board games, video games, and Tae Kwon Do with his kids. He has a lifelong interest in science fiction and fantasy; his list of favorite authors includes Orson Scott Card, Tom Clancy, Arthur C. Clarke, Edward Cline, Joe Haldeman, Robert Heinlein, Steven King, George R. R. Martin, C. S. Lewis, Patrick Rothfuss, Brandon Sanderson, Neal Stephenson, Kim Stanley Robinson, J. R. R. Tolkien, Vernor Vinge, Bill Watterson, and Connie Willis. He says, “My path to space has been paved with books,” and for him a book appears on the mission patch for ISS Expedition 45. He has a particular interest in reading and education, hoping to share and broaden the path that led him into space with today’s students and tomorrow’s spacefarers.

Dr. Lindgren is a board-certified practitioner of emergency medicine and aerospace medicine. He has a Bachelor of Science in Biology from the United States Air Force Academy, a Master’s degree in Cardiopulmonary Physiology, a Doctorate of Medicine from the University of Colorado, and he worked a three-year residency in emergency medicine, including a year as chief resident, at the Hennepin County Medical Center in Minneapolis, and completed a National Library of Medicine Post-Doctoral Fellowship and Master of Health Informatics at the University of Minnesota, as well as a two-year residency in Space Medicine and Master of Public Health at the University of Texas Medical Branch in Galveston. He has worked with deputy flight surgeon for STS-130 and ISS-25 missions and was selected for the astronaut training program in 2009. He was CAPCOM (communications control) for ISS-30 in 2011-2012.

In space, Dr. Lindgren will work on experiments involving making things and living in space, including crystal growth, low-gravity metal alloys, remote medical robotics, understanding the aging process, and studying the effects of zero gravity, radiation, and long-term isolation. Dr. Lindgren will be aboard the International Space Station during the 2015 Worldcon and his convention participation will be through remote communication. As of March 2015, his in-space schedule and availability has not been finalized; Sasquan will announce details as we have them.

Founded in 1939, the World Science Fiction Convention is one of the
largest international gatherings of authors, artists, editors,
publishers, and fans of science fiction and fantasy. The annual Hugo
Awards, the leading award for excellence in the fields of science
fiction and fantasy, are voted on by the Worldcon membership and
presented during the convention.

Sasquan is organized under the banner of the SWOC: http://swoc.org/contact.php