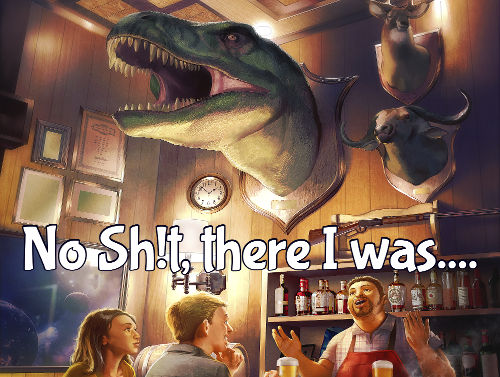 Rachael Acks and publisher Alliteration Ink have opened a Kickstarter appeal to fund Acks’ anthology No Sh!t, There I Was.

Is there a better phrase to start a story than “No Shit, There I Was…”? If you hear someone start with that phrase, you know it’s going to be worth listening carefully. That’s how all the craziest – and most interesting – stories start.

And then we turned a bunch of speculative fiction authors loose on that phrase.

I mean, these stories – whew.  Science fiction. Fantasy. Humor. Even horror. What they came up with is kind of hard to believe.

But no shit, there we were.

There are 24 stories “that stretch the realm of probability” already lined up.

Acks is doing a slow reveal of the table of contents, story-by-story, as a series of blog posts. Two titles have already been unveiled —

Supporters who pledge $5 or more to the Kickstarter will receive the eBook in all three major formats: PDF, ePub, and Kindle. Every reward level above $5 includes the eBook. When you pledge $15 or more, you will get the eBook and you will also receive the trade paperback.

1 thought on ““No Sh!t, There I Was” Anthology Looks for Crowdfunding”