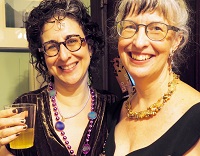 By Mark L. Blackman: On the evening of Tuesday, December 8 the New York Review of Science Fiction Readings Series continued its tradition of celebrating the December Holidays Season with “Family Night,” featuring one of its favorite families, Ellen Kushner and Delia Sherman (for their seventh December happening).

On the Series’ Facebook page, in response to a query, producer/executive curator Jim Freund explained what makes it Family Night.  “Delia and Ellen are family to each other – a married couple. Also virtual family to so many of us at the Reading Series and the sf community.  And further the fiction is family-friendly – no disclaimers necessary for sensitive ears.” Also in keeping with custom, their reading was guest-hosted once more by the Reading Series’ third curator (1994-96; longtime attendees know who), its “Jon Pertwee,” as it were.  (Her anonymity here is due to her outside professional concerns.

The festive event, held at the Series’ current venue, the Brooklyn Commons Café (in Downtownish Brooklyn and “located near more public transportation than Times Square”), kicked off as usual with a welcome from Jim Freund, who is otherwise the longtime host of WBAI-FM’s Hour of the Wolf radio program on sf and fantasy (the show broadcasts and streams every Wednesday night/Thursday morning from 1:30-3:00 am and worldwide at wbai.org, and for a time afterwards may be heard on-demand as well as an RSS feed for podcasts) and Podcast Editor and Host for the Hugo Award-winning Lightspeed Magazine.  The Kickstarter campaign to fund the Series, he reported, has not yet gotten under way (stand by, as broadcasters say), and he relayed news of the recent death of his WBAI colleague Simon Loekle (who had participated in the Series, including a memorably chilling rendition of Poe’s “The Cask of Amontillado” – and yes, the “l” is pronounced).

Continuing, he trumpeted upcoming readings in the Series’ 25th season: on Tuesday, January 5, 2016 the readers will be Terence Taylor (sf/fantasy writer as well as the Series’ video producer – and no, he won’t run an extension cord from the booth – Freund will handle the equipment) and Maria Dahvana Headley; and on Groundhog Day (Tuesday, 2 February), Barbara Krasnoff and Richard Bowes. Jumping ahead, April’s event will be a launch for Clockwork Phoenix 5, and May’s a play by Andrea Hairston.  Finally, Jim invited the audience to grab dinner during the intermission or after the readings at the Café, which has added hot items to its menu, then turned hosting duties over to the guest-curator (this place was, she declared, the Series’ “nicest home venue”), who introduced the evening’s first reader.

In Swordspoint, Ellen Kushner introduced readers to the much-honored and much-loved Riverside series, which has been called a “fantasy of manners” and “mannerpunk,” alternating wit, intrigue, swordplay and chocolate. The audiobook, which she narrated, won both an Audie and Audiofile Earphones Award, but, she confessed, she felt a bit odd reading, having heard professionals perform her work. She did, though, have to invent an accent for one character, then coach one actor in it.  (Later, in conversation, she revealed how instead of attempting an accent during this reading, she achieved the effect with syntax, intonation and consonant emphasis.)

Tremontaine, from which she read selections of its first chapter, “Arrivals,” is a prequel to Swordspoint, set some 15 years earlier.  One “arrival” is literal, discussion between the Duke and Duchess Tremontaine about the birth of the baby who will be the future Alec Campion, the Mad Duke Tremontaine. Another is farmgirl Micah, who, on family advice, has cut her hair and is passing as a boy, and has, we see, hidden talents as a geometer.  A third viewpoint character, Ixkaab Balam (aka Kaab), a trader, has just come to Riverside, a place full of thieves, “very bad women,” swordsmen, and poor people who like a bit of flash and dazzle (and singing – Ellen sang a few bars of a woman’s song), and almost immediately challenges a local who has insulted her people, her mother and her outfit.  (The reading was inadvertently enlivened further by Kushner’s pages getting dropped and scattered.)

In a Q&A, Kushner clarified that Tremontaine was a 13-weekly episode (in the current season) serial released Wednesday mornings (the seventh ran the next day) in text and audio (she recommended getting both) from SerialBox.com.  (The serial would not break for Christmas or New Year’s, leading Ellen to proclaim that it was a perfect escape from dull holiday family gatherings – “Tremontaine is even more fucked-up than your family.”)  Chapter 1 is available online for free, the rest cost money.  Episodes have been written also by Alaya Dawn Johnson, Malinda Lo, Joel Derfner, Racheline Maltese (who was present) and Patty Bryant.  Freund noted that Riverside has always been sort of a shared universe; The Fall of the Kings was written with Delia Sherman.  Well, said Kushner, it’s not wide-open, but “curated,” a collaborative serial.  She also noted that her dress and the host’s were based on the Riverside cityscape, the latter a design by Kathleen Jennings.

During the intermission, a raffle was held for a bottle of the exceedingly rare Tremontaine Pale Ale (shhh, another label had been soaked off and replaced by one with one of Jennings’ cover designs), a copy of Kushner’s The Golden Dreydl, a Jewish take on The Nutcracker (appropriate as it was Chanukah), and an inscribed (and kissed) copy of the manuscript from which Delia Sherman would be reading. In a true Chanukah miracle (topping that extra-burning oil), I won the third prize.  Then, speaking of which, as it was the third night of the Festival of Lights, Ellen presided over the ceremonial lighting of a Chanukah menorah (three candles plus the “servant” candle) and a brief blessing.  The host then introduced the second reader of the evening.

Delia Sherman is the author of, among other works, the Prometheus and Andre Norton Award-winning The Freedom Maze (from which she has read at previous NYRSF Readings), a time-travel historical set in antebellum Louisiana.  This time she read excerpts from Chapters 3-5 of The Evil Wizard Smallbone (which, she announced to the crowd’s disappointment, won’t be out until November 2016), appropriately (and giving equal time to the other December holiday) scenes set at Christmas.  We are first introduced to the eponymous 300-year-old proprietor of Evil Wizard Books and founder of the idyllic (at least on the surface), coastal town of Smallbone Cove in adults’ (“Covers”) uncomfortable answers to a young girl’s awkward questions about Zachariah Smallbone’s evil and magic.  Then we meet the (evil) wizard as he puts a boy, Nick, a runaway who had sought refuge, to work around his house and shop.  Nick (whom Smallbone calls Foxkin), having spent part of a week (and missing Christmas) turned into a spider (he’s better now), and finding it magically impossible to run off, undertakes a succession of chores.  (Is The Sorcerer’s Apprentice in his future?)