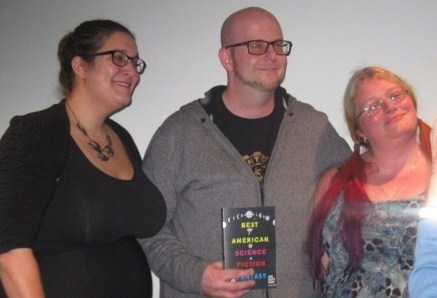 By Mark L. Blackman: For over two decades (this is its 25th season), the New York Review of Science Fiction Readings Series has presented some of the best American (and British) science fiction and fantasy.  On the evening of Tuesday, November 10, 2015 (there is no Veterans Day Eve), it did so literally, spotlighting The Best American Science Fiction and Fantasy 2015, and featuring two writers from that anthology, Carmen Maria Machado and Seanan McGuire.

The event, held at the Series’ current venue, the Brooklyn Commons Café, sensibly located in the borough of the same name and convenient to public transportation, kicked off as usual with a welcome from producer/executive curator Jim Freund, longtime host of WBAI-FM’s Hour of the Wolf radio program on sf and fantasy.  (The show broadcasts and streams every Wednesday night/Thursday morning from 1:30-3:00 am and worldwide at wbai.org, and for a time afterwards may be heard on-demand as well as an RSS feed for podcasts.  There is no escape.)  Tonight’s readings, he reported, were streaming live via Livestream, where they would remain archived for a period of time.  (Catch them by going to Livestream.com and searching for NYRSF.)  Further thanks were due Terence Taylor, sf/fantasy writer and video producer.

Next month’s readings, held, as were November’s, on the second Tuesday, December 8th, Freund announced, would be the Series’ traditional Family Night, equally traditionally featuring the family of Delia Sherman and Ellen Kushner.  Finally, he thanked the audience for contributing (readings are free, but there is a suggested donation of $7), as the Series pays to rent the present space and an anticipated Kickstarter campaign to fund the season has not yet happened, then turned center stage (there are now spotlights!) over to guest host John Joseph Adams. 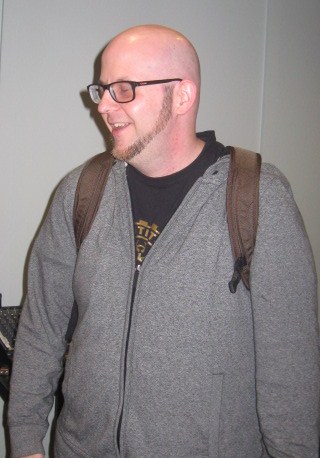 Adams, the editor of many anthologies (he’s been called “the reigning king of the anthology world”), including Wastelands and The Living Dead (which were spotlighted at past NYRSF readings), as well as the editor and publisher of the magazines Nightmare and the two-time Hugo Award-winning Lightspeed, and a producer for WIRED’s The Geek’s Guide to the Galaxy podcast, has been absent from the Series for a while.  His return was in his capacity as series editor of The Best American Science Fiction and Fantasy.  For several decades, he explained, distinguishing it from similarly-named tomes, Houghton (pronounced “Hootin’,” like what a Southern owl does) Mifflin Harcourt has been annually publishing a “Best American” series showcasing the country’s finest short fiction and nonfiction.  While sf and fantasy stories have been included in past editions, this is the first time that there is a volume devoted to the genre.  Adams, naturally, feels that our genre can stand up to the best fiction out there, “but that’s preaching to the choir,” he paused, regarding the audience.  Joe Hill, an award-winning author in his own right (whom his parents are is no secret), was the guest editor of this inaugural volume, which contains 20 stories, equally divided between fantasy and sf.  (There will be a second.)  Concluding, he introduced Seanan McGuire, the first reader of the night, whom he asserted is in every one of his anthologies.

McGuire is the author of more than a dozen novels and (“literally”) uncounted short stories; she was the winner of the 2010 John W. Campbell Award for Best New Writer, and in 2013 became the first person ever to appear five times on the same Hugo Ballot.  (No “Puppies” were involved; McGuire has two “abnormally large blue cats.”)  “I am not a subtle beast,” she declared at one point, lifting her leg to display her bright orange sneakers.  Her offering was her story from the collection, “Each to Each,” which originally appeared in Lightspeed Magazine’s Women Destroy Science Fiction! issue.  Fitting in with the theme, the story centered on a U.S. Navy all-woman crew of submariners patrolling and charting the seabeds (in this instance the Pacific), “the most valuable real estate” of the future era.  For their mission, the women (dubbed “military mermaids”) have been modified for the depths, surgically and genetically altered (likely irreversibly) – their musculature has been transformed, bones have been cut away, and they’ve been given gills and some fishtails – modeled on a variety of sea creatures, from sharks to lionfish, jellyfish and eels.  (Their psychology, it would appear, has correspondingly shifted away from human.)  No Disney little mermaids they. 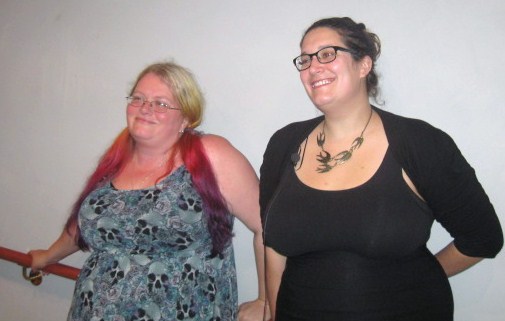 During the recess, there was a raffle for, appropriately, a copy of The Best American Science Fiction and Fantasy 2015.  Adams then presented the second and final reader.

Carmen Maria Machado is a Nebula-nominated fiction writer, critic, and essayist.  Her story from the anthology, “Help Me Follow My Sister into the Land of the Dead,” unusually was framed as a Kickstarter campaign; aptly, its first appearance was in Help Fund My Robot Army!!! and Other Improbable Crowdfunding Projects (ed. Adams).  It is not a “heartwarming sibling reunion.”  The narrator is trying to raise the funds to travel to the portal to the titular realm to chase after her “ungrateful wastrel” (the campaign understandably omits that term) younger sister; she is not dead, but has, essentially, crashed a party.  Oddly, the motivation for her pursuit is to tell her that their parents have died (the details of their death are also fudged for the campaign).  The story was laugh-out-loud funny … until its final sad turn.

As customary at these Readings, the Jenna Felice Freebie Table offered giveaway books, and cheese and crackers were on hand, along with leftover Hallowe’en candy and even Hallowe’en-themed fortune cookies (“A creepy crawly will be on your shoulder tonight” – does a housefly count?).  For beverages and other wants, the Café was a few steps away. Copies of The Best American Science Fiction and Fantasy were available for sale and autographs, as were McGuire’s CDs.