Parental advisory:  This report is brought to you by the letter “F.”

By Mark L. Blackman: On the frigid winter evening of Tuesday, January 5, 2016 (an exceptionally mild December had spoiled us), the New York Review of Science Fiction Readings Series kicked off the second half of its 25th anniversary season with Maria Dahvana Headley and Terence Taylor sharing their short fiction at the Series’ current venue, the Brooklyn Commons Café (in the wonderful Borough of Brooklyn).

In with the new, in with the old, as Jim Freund, producer/executive curator of the Series and host of the long-running live radio program on WBAI-FM, Hour of the Wolf (broadcast and streamed every Wednesday night/Thursday morning from 1:30-3:00 am) welcomed the audience, cautioning us that we were on camera and livestreaming (visit Livestream.com), so to be mindful of what we say and next to whom we’re sitting.  He thanked contributors (the event is free, with a suggested donation of $7), and reported that, alas, the Kickstarter campaign to fund the readings is at present a non-starter, but he still hopes to get one underway.  (Hmm, maybe he could blackmail the attendees over our shady associations.)  Next month’s readers, on 2 February, he announced, will be very familiar faces, Richard Bowes and Barbara Krasnoff.  Karen Heuler will be one of the readers on 1 March, and 5 April’s event will be the launch of Clockwork Phoenix 5, with Mike Allen guest-hosting.  Special events are also planned for May and June, respectively, a play by Andrea Hairston, with musical accompaniment, and a celebration of the 50th anniversary of Space and Time magazine, with Gordon Linzner, et al. Finally, he invited the audience to grab dinner during the intermission or after the readings at the Café, which has added hot items to its menu. (He suggested ordering early so that it would be ready.) 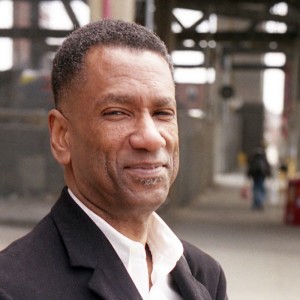 With the evening’s first reader, Terence Taylor, unable to act in his usual role as the Series’ technical director, he and Freund swapped places, and Jim did the camera cuts.  (Video killed the radio star?)  Taylor is an award-winning children’s television writer who, “after a career of comforting young kids, [is] now equally dedicated to scaring their parents.”  He is the author of, among a number of horror stories (“literary carnage”), the Vampire Testament Trilogy, the second volume of which, Blood Pressure, he read from at a past NYRSF Reading.  The conclusion of his trilogy, Past Life, is “in process” and “not ready” for public reading (as he discovered when he tried at Readercon).  (For more on the books, see his website http://doyoubelieveinvampires.com/.)

His second piece, “Star Fuckers, Inc.,” was a major (and welcome) change in mood.  Inspired by William Burroughs (of whom Taylor is a huge fan, as he discussed with an audience member during the intermission), the darkly comic work, well-received by the audience, was about time-abducted celebrity sex slaves, drugged and mind-wiped before being returned; here the stars are the later-tragic James Dean and Marilyn Monroe (still Norma Jean Baker).  (Terence was then mind-wiped and returned to the control booth.  Serves him right.)

A short break followed, during which a raffle was held for contributors.  The prizes were a copy of Taylor’s manuscript of “Star Fuckers, Inc.” (“signed with his special autograph pen”) and the audiobook (edited by Freund) of the John Joseph Adams-edited anthology Wastelands 2.

Maria Dahvana Headley is a New York Times-Bestselling author and editor, whose Nebula and Shirley Jackson Award-nominated short fiction has been anthologized in many years’ bests, and who, with Neil Gaiman, is the #1 New York Times-bestselling editor of the anthology Unnatural Creatures.  Her most recent works include the young adult fantasy novel Magonia, the dark fantasy/alternate history novel Queen of Kings, and the internationally bestselling memoir The Year of Yes.  Her offering of the night was from her novelette The Virgin Played Bass, about a troupe of roving musicians passing through war’s horrors and destruction, a reimagining of the fairy tale “The Town Musicians of Bremen”, and its Scottish version “The White Pet,” with a mix of “Puss in Boots” and the Gospels.  In the midst of Eastern European war (“after the War and before the War”), Bruno, a young accordionist hooks up with a talking (multilingual yet, though fond of a certain word beginning with “F”) and singing cat (yes, he caterwauls), the White Pet, and the duo and a growing band (three Marys for their miracle plays) wander through Russia, Moldova, Serbia, Croatia, Macedonia and Hungary toward Brementown (“Bremen’s where we’re always going, until there’s no Bremen to go to.”) and quest for fish soup.  (The nine lives trick comes in very handy for them.)  The story is running in the current issue of Uncanny, (#8) released earlier that day.

As traditional, the Jenna Felice Freebie Table offered giveaway books, along with refreshments (cheese, crackers and cookies).  Additionally, books by Taylor were for sale and autograph.  The cold-braving crowd of about 30 included Melissa C. Beckman, Richard Bowes, Amy Goldschlager (filling in as ticket-taker for Barbara Krasnoff, who was out at the Consumer Electronics Show in Las Vegas), Karen Heuler, John Kwok, James and Susan Ryan, and Max Schmid.  Afterward, people milled around, socialized and grabbed a bite.

3 thoughts on “NYRSF Readings Welcome Winter with Taylor and Headley”