Chuck Gannon and several other writers traveled to Quantico last February and coached uniformed service members who produced Science Fiction Futures, the narrative accompaniment to the MCSEF. Writers included Commander Phillip Pournelle USN. The near-future military fiction they wrote can be downloaded as a free PDF at the link. 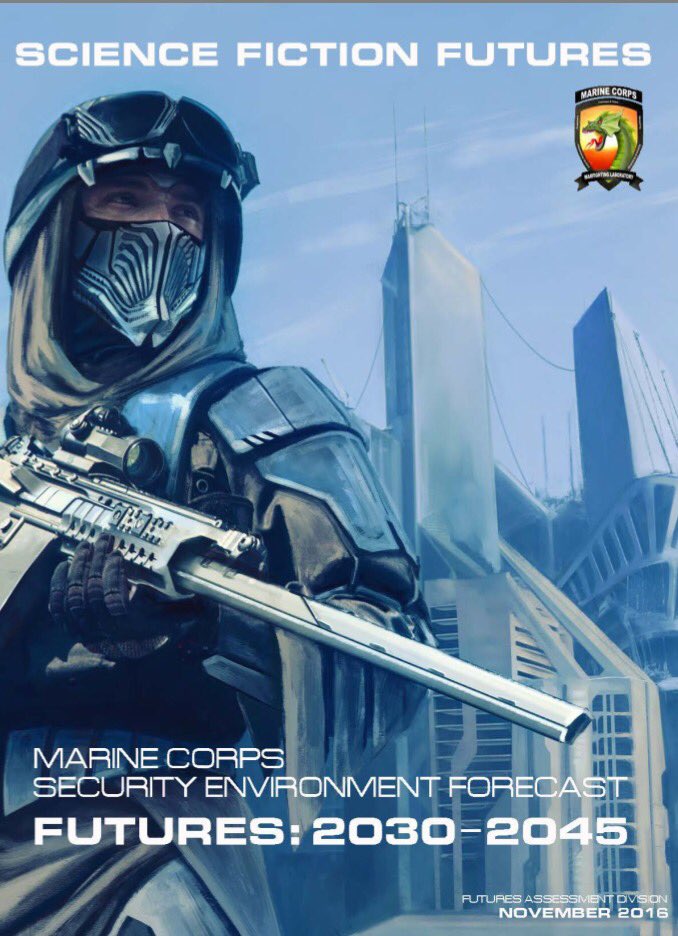 (2) ON THE OTHER HAND. Nancy Jane Moore tells Book View Café readers why she’s not wild about Rogue One.

I was primed to be reflective about the movie because it was preceded by twenty minutes of trailers for truly dreadful movies that I don’t plan to see. About halfway through them, I said to myself, “No wonder the world is falling apart.” The prevailing narrative seems to be fighting and war as a response to everything.

Many of these movies strike me as right-wing narratives (though I suspect most of the people involved in making them don’t vote that way): Humans fighting either evil aliens or evil supernatural creatures. Others focus on the outsider who fights for us all, but gets no thanks – not a story about people coming together to solve their problems.

Stories like Rogue One might be seen as having a liberal bias – rebels fighting a fascist, dictatorial regime. But in every case the story assumes that the solution is to blow things up.

It’s not the violence and killing that I’m objecting to – I agree with pacifists about many things, but I’m not one – but rather the idea that those things are the only solution. A lifetime in the martial arts has taught me that while there are times when a physical fight (or a war) may be the best choice, those times are few and far between.

(3) UHLENKOTT OBIT. Rochelle Uhlenkott (1960-2016) died shortly before Christmas, reports Keith Kato, of complications from a flu infection. She was a UCI Extension instructor in Optical Engineering, and in SFF did a little bit of writing and editing. Her short story “The Gift” (as Rochelle Marie) was published in Marion Zimmer Bradley’s Sword and Sorceress XI: An Anthology of Heroic Fantasy (1994),

According to Brandon Alinger, the author of Star Wars Costumes: The Original Trilogy, the buns do not even appear in any of the concept artwork done for Leia in the preparation of the film.

In later interviews, Star Wars creator George Lucas said he looked to Mexico’s female revolutionaries, or “soldaderas”, who joined the uprising at the start of the 20th Century.

“I went with a kind of south-western Pancho Villa woman revolutionary look, which is what that is. The buns are basically from turn-of-the-century Mexico,” Lucas told Time in 2002.

It makes sense to look to such a band of women when creating a character far removed from a traditional princess awaiting rescue.

(5) DOUBLE TROUBLE. The Washington Post’s Jena McGregor, in “Even on this, America is divided: Was Cinnabon’s Carrie Fisher tweet offensive?”, discusses how Cinnabon leaped very deeply into the culture wars when they tweeted a photo of Carrie Fisher as Princess Leia with a Cinnabon replacing one of the buns in her hair and the line “RIP Carrie Fisher,  you’ll always have the best buns in the galaxy.”

(6) DON’T LET THE YEAR MUG YOU ON THE WAY OUT. Everyone, be careful out there!

I've never actually felt like a year was malevolent before.

If 2016 tries to jump me, I will kick it right in the fucking teeth. https://t.co/FnXYrrEOyt

(7) PROGNOSTICATION. Our secret agent informs us this wall mural will be on next week’s Mark Hamill’s Pop Culture Quest at Blast from the Past in Burbank. 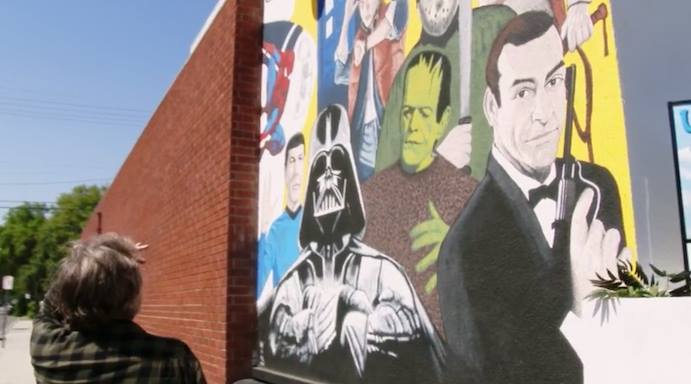 (9) LET THE CUTE BE WITH YOU. This German Star Wars-themed Christmas ad for Kaufland is really sweet – and you don’t need to know any German to enjoy it.

(10) TOVE JANSSON NEWS. In the Financial Times, art critic Jackie Wullschlager reviews “Adventures in Moominland”, which is showing at the Southbank Centre in London through April 23.  British fans prepping for Worldcon can see this exhibit by Finland’s greatest fantasy writer and her creation, the Moomins, including discussions of why Tove Jansson thought herself more of an artist than a writer, how her lesbianism informed her work, and why she owned and read Oswald Spengler’s The Decline of the West.

You reach the Southbank Centre’s Adventures in Moominland by opening the cover of a giant book that turns out to be a door. Flit through a few gauze curtains painted with Jansson’s illustr­ations and you find yourself standing in a storybook installation: a snow-clad Finnish forest with gleaming lights and a lost troll. “The sky was almost black but the snow shone a bright blue in the moonlight” when Moomintroll, the first troll not to hibernate, stepped out alone into a cold new world. Moominland in Midwinter (1957) is a small existentialist masterpiece — the story of a frightened, angry, isolated young troll who eventually comes in from the cold to understand “one has to discover everything for oneself, and get over it all alone”.

(11) FINAL TROPE. At The Book Smugglers, Carlie St. George says this is the final installment of Trope Anatomy 101 — “Choose Your Own Family”.

When we discuss common tropes in pop culture, we’re often analyzing them as inherently negative things, stereotypes or clichés that are in desperate need of subversion. And often, we’re right to do so; in this past year, we’ve already looked at some seriously problematic tropes in this column, from the waving away of chronic conditions and disabilities to the variety of fat-shaming tropes that arise time and again in film, television, and literature.

However, not every trope is harmful and some are actually quite delightful when embraced. Honestly, one of the reasons I love fanfiction as much as I do is that it downright revels in its tropes. They’re frequently used as signposts, specifically, welcome signs: “Are you looking for Huddle For Warmth Romances? How about Body Swapping Fics with a focus on Team Building? Come in, come in, you’re in the right place!”

…If those terms mean nothing to you, found family stories are about characters that come together and make their own family unit, despite not being related by blood. (Generally. Sometimes, a few characters in found families will be biologically related; think River and Simon Tam in Firefly, siblings in a disparate crew of misfits and criminals (who all just happen to share meals and celebrate birthdays with one another, deep in the black of space.) Very often these characters have been orphaned, disowned, or have otherwise extremely strained or stressful relationships with their biological families; the second family functions to support, celebrate, and mourn with one another in a way that their blood relatives will not or cannot.

(12) ROYAL COSPLAY. The Queen’s wardrobe selection for her Christmas broadcast led to a wave of science fictional levity —

Amazing the Queen finds time to give a speech while also being the USS Enterprise science officer ? pic.twitter.com/m8M262IX8r

[Thanks to Gregory Benford, Keith Kato, John King Tarpinian, Martn Morse Wooster, and Andrew Porter for some of these stories. Title credit goes to File 770 contributing editor of the day ULTRAGOTHA.]