(1) 100 BELOVED BOOKS. PBS’ series The Great American Read will air it’s “Fall Kick Off” on September 11. The eight-part series explores the power of reading, told through 100 favorite American novels as determined by a national survey.

Promotion for the series includes an incredible set of travel poster-style ads for some of the titles, many of them genre works, like these — 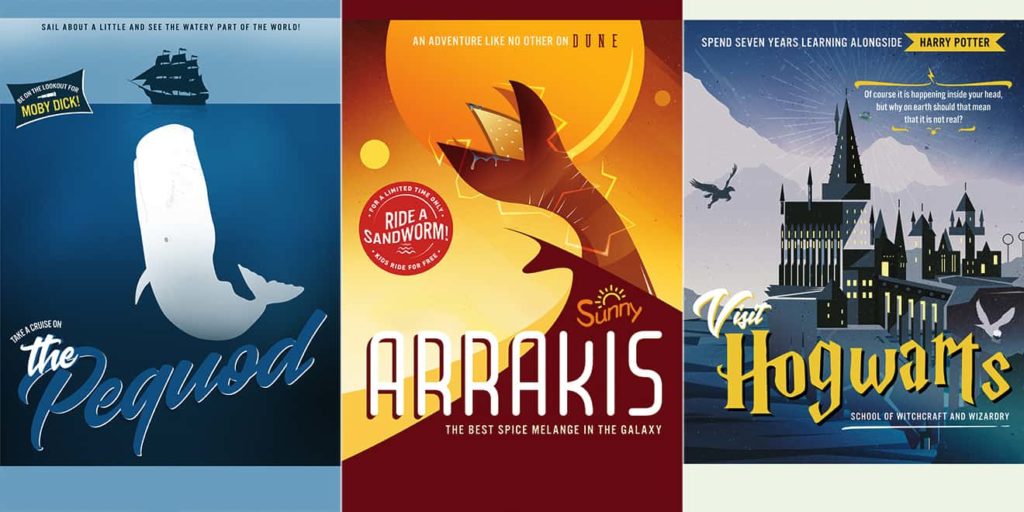 (2) STRAIGHT OUTTA SWEDEN. Simon Stålenhag’s paintings will be the inspiration for a TV series: “Amazon Orders Sci-Fi Series ‘Tales From the Loop’”.

Amazon has given a series order to “Tales From the Loop,” a science fiction drama from “Legion” writer Nathaniel Halpern. The project is a co-production with Fox 21 Television Studios.

“Tales From the Loop” is based on the art of, whose paintings blend elements of futuristic science fiction with images of rural life in the Sweden.

“Simon Stålenhag’s paintings are renowned for their vision of a not-too-distant, futuristic landscape. We are looking forward to bringing that to life and sharing it with our Prime Video audience,” said Albert Cheng, co-head of television, Amazon Studios.

In a curveball of cosmic proportions, astronomers went looking for a hypothetical planet on the far fringes of our solar system, and instead found 12 new moons dancing around Jupiter.

To be clear, these moons are no Ganymede, the largest moon in the solar system. They’re tiny, some barely a mile across, and they are tracing all kinds of weird paths around the giant world.

…Normally, spotting new moons around Jupiter is quite difficult. Anything small enough to still be hiding from our view is quite faint, and tracking those dim dots requires powerful telescopes that often have too small a field of view to capture the entire Jovian system. To make matters worse, Jupiter is quite bright, and its glare can obscure tiny moons.

But last year, the Carnegie Institution for Science’s Scott Sheppard and his colleagues were hunting a faraway planet rumored to orbit beyond Pluto—a planet so large its gravitational heft rearranges the orbits of smaller, distant objects. So, the team aimed a telescope at Chile’s Cerro Tololo Inter-American Observatory at the star fields surrounding our cosmic neighborhood, looking for faraway pinpricks of light moving in solar orbits.

(4) JAMES WEBB TELESCOPE COULD HAVE ROCKET ISSUES. The latest slips in the James Webb Space Telescope schedule have it launching no earlier than March 2021. The plan all along has been to use an Ariane 5 launch vehicle (in fact, key aspects of the JWST design were customized for the Ariane 5), which has a planned end of life in 2022. Ars Technica notes that any further slips in the JWST schedule could begin to threaten availability of the launcher. Quoting the article (emphasis added):

Back in 2015, when NASA formally reached an agreement with Arianespace to launch on the Ariane 5 rocket, the projected launch date was 2018. NASA partnered with the European Space Agency and its affiliated rocket company for the launch to keep costs down. Essentially, Europe provided a rocket in exchange for some of the observing time. The telescope’s massive heat shield was then designed to fold 12 times to fit within the Ariane 5’s payload fairing.

Last year […] the telescope’s launch date was delayed into 2019 […] [Now the] launch has since been delayed twice more: first into 2020 and then into 2021. The Ariane 5 can still launch during these years. Further delays, however, may prove problematic.
According to Alain Charmeau, who as the head of Ariane Group oversees a family of launch vehicles including the Ariane 5, European states have created a transition plan to the Ariane 6. A separate launch pad is being constructed at the European spaceport in French Guiana for the Ariane 6, and this will allow the Ariane 5 to continue flying for a few more years—but not indefinitely.

“One can back up the other one,” he told Ars. “We will have the Ariane 5 for at least until the end of 2022, but it’s not clear cut. If we need to have another launch in 2023, we can extend it, it is just a matter of maintaining the team and maintaining the infrastructure. But our plan today is to start Ariane 6 in 2020, and stop Ariane 5 at the end of 2022.”

(5) OVERLY FRESH PRINCE. Mashable reports “Will Smith tries to make out with Sophia the robot, and it does not go well”.

Budding YouTuber Will Smith isn’t afraid to churn out some weird content on his channel, including an attempt at getting frisky with a humanoid.

In his most recent clip, Smith sets himself on a date in the Cayman Islands with Sophia the robot, a humanoid robot from Hanson Robotics that uses artificial intelligence to interact with humans. After a few awkward moments and some burns from Sophia to Smith, he leans in for a kiss, and well, gets denied.

(9) NOT JUST A PIE IN THE SKY IDEA. John King Tarpinian urged me to give you enough notice of the time and date when Neil Armstrong took his first step on the Moon — Friday, July 20 @ 7:56 p.m. PDT.  (3:56 a.m. GMT) – so you can plan your own ceremonial observance for the anniversary. John’s already been doing his for years – eating a Moon Pie. 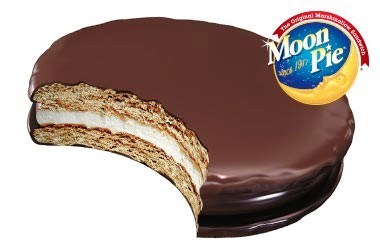 NASA’s Parker Solar Probe will be the first-ever mission to “touch” the Sun. The spacecraft, about the size of a small car, will travel directly into the Sun’s atmosphere about 4 million miles from our star’s surface. Launch is slated for summer 2018.

In order to unlock the mysteries of the Sun’s atmosphere, Parker Solar Probe will use Venus’ gravity during seven flybys over nearly seven years to gradually bring its orbit closer to the Sun. The spacecraft will fly through the Sun’s atmosphere as close as 3.8 million miles to our star’s surface, well within the orbit of Mercury and more than seven times closer than any spacecraft has come before. (Earth’s average distance to the Sun is 93 million miles.)

Flying into the outermost part of the Sun’s atmosphere, known as the corona, for the first time, Parker Solar Probe will employ a combination of in situ measurements and imaging to revolutionize our understanding of the corona and expand our knowledge of the origin and evolution of the solar wind. It will also make critical contributions to our ability to forecast changes in Earth’s space environment that affect life and technology on Earth.

(11) SHUT UP AND KEEP SWIMMING. “Rising Seas Could Cause Problems For Internet Infrastructure” — bad enough that your home is gone — you won’t be able to blog about it either.

…The dense network of cables that make up the Internet is likely to be inundated with saltwater as sea levels rise, a new analysis suggests, putting thousands of miles of critical infrastructure along U.S. coastlines underwater in the next 15 years.

“It is actually the wires and the hardware that make the Internet run,” explains Ramakrishnan Durairajan, a computer scientist at the University of Oregon and an author of the research. The analysis estimates under the most severe model for sea level rise that more than 4,000 miles of fiber optic cable along U.S. coastlines will be underwater by the early 2030s.

The Internet is particularly susceptible to flooding because data travels through underground cables buried along roadways and through tunnels. While the massive deep sea cables that carry data under the Atlantic and Pacific oceans are designed to be permanently underwater, other infrastructure such as copper wiring and power stations are not.

Scientists have discovered the earliest known evidence of bread-making, from a 14,000-year-old dig site.

The bake would have looked like a flatbread and tasted a bit like today’s multi-grain varieties, they say.

Our ancestors may have used the bread as a wrap for roasted meat. Thus, as well as being the oldest bread, it may also have been the oldest sandwich.

The find, from the Black Desert in Jordan, pushes back the first evidence for bread by more than 5,000 years.

(13) ROOTS. Popular Mechanics doubts these will ever be on the market, though — “Scientists Find ‘Quadrillions’ of Tons of Diamonds Beneath Earth’s Surface”.

Deep beneath the Earth’s surface, there’s a gigantic cache of diamonds, according to new research. While it’s unlikely that we’ll ever be able to obtain these diamonds, knowing that they’re there helps us learn more about our own planet and what it’s made of.

To discover what lies beneath the surface, scientists can’t simply look with their eyes. Instead, they use sound waves and listen. Unlike light, sound can travel through solid rock, and by listening closely scientists can learn a great deal about what the inside of the Earth is like.

Typically, these sounds come from earthquakes or volcanic explosions, and by studying the resulting seismic waves scientists can determine what materials lie underground. One group of scientists was studying a strange anomaly that occurs when these seismic waves pass through underground structures called cratonic roots. These structures are ancient, highly dense rock formations shaped like inverted mountains that lie hundreds of miles beneath most tectonic plates.

Because these rock formations are so dense, sound waves move much faster through thes cratonic roots than through most other rock. But for some reason, many of the seismic waves measured over the last few decades move even faster than predicted. A group of scientists, led by MIT scientist Ulrich Faul, suspected that some material inside the cratonic roots was speeding up these waves.

(14) DON’T WASTE THE OPPORTUNITY. NASA wants your help taking out the trash. Well, “you” if you’re an aerospace development company. SYFY Wire has an article (If we’re going to go to Mars, this is how we’ll have to deal with trash) discussing NASA’s initiative to get industry help with the trash issue:

NASA wants to figure out how to get rid of all those freeze-dried food wrappers (and everything else) way before we land on Mars or venture into deep space. The space agency just announced that it will be seeking concepts for trashing space garbage through its NextSTEP program, so they can find new ways to compact and process trash so the waste situation.

Using the ISS, which sees literally tons of trash every year, as a testing ground for methods of waste management is the most obvious way to prepare for extended stays away from Earth. The floating space station already receives around 13 tons of supplies from cargo resupply missions every year, and periodically sends around 2 tons back to Earth in a commercial supply vehicle that either brings it to the surface or lets it burn up in the atmosphere.

NASA’s announcement (NASA Seeks New Ways to Handle Trash for Deep Space Missions) says that development will be in two phases, but companies must be prepared to invest some of their own funds. Quoting the NASA announcement:

In Phase A, selected companies will create a concept trash compaction and processing system, conduct design reviews with NASA, and validate concepts through prototype ground demonstrations. Throughout this phase, the companies may request use of NASA facilities to conduct subsystem tests. In Phase B, a flight unit will be developed to demonstrate a system aboard the space station as early as 2022.

Inherent with the NextSTEP partnership model, private companies must contribute their own corporate resources toward the development of their trash compaction and processing systems. In this case, responders are required to show a minimum of 20 percent contribution toward the overall development cost, or 10 percent for small businesses.

Robin of Loxley (Taron Egerton) a war-hardened Crusader and his Moorish commander (Jamie Foxx) mount an audacious revolt against the corrupt English crown in a thrilling action-adventure packed with gritty battlefield exploits, mind-blowing fight choreography, and a timeless romance.