Ray Bradbury celebrated his 91st birthday on August 22. He was especially pleased with one of his gifts — Phoenix Pictures announced it will film a version of his novel Dandelion Wine, Mike Medavoy directing. Ray told the Hollywood Reporter:

“This is the best birthday gift I could ask for. Today, I have been reborn! ‘Dandelion Wine’ is my most deeply personal work and brings back memories of sheer joy as well as terror,” Bradbury said.

“This is the story of me as a young boy and the magic of an unforgettable summer, which still holds a mystical power over me,” the author said.

Alice Hoffman, author of Practical Magic and The Red Garden, gave him a birthday tribute in the LA Times op-ed section:

Bradbury tells the story of how, as a boy in 1932, he went to a country fair where a carnival entertainer named Mr. Electrico touched him on the nose with an electrified sword, made his hair stand on end and shouted “Live forever!”

He has certainly achieved eternal life through his books, which are destined to live on. But it’s beginning to seem as if he took the “live forever” command literally as well. On Monday Ray Bradbury turns 91, and his birthday is the perfect day to reflect on all he has given us. 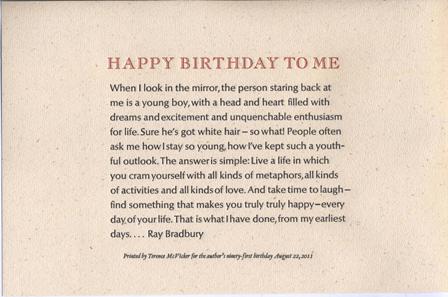