By Chip Hitchcock: At some ages any year may seem momentous, but 1978 still stands out in memory. I was a couple of years out of college, but still singing in Harvard’s summer chorus and signing books out to borrowers at the MITSFS (owner of the world’s largest open library of SFF); I was working as a ~chemistry researcher, with no idea that in another couple of years I’d be massively more entangled in fandom and working for two other fans at a computer company.

For a start, Boskone (then and now my local convention) grew from 1000 people to over 1400 after a couple of years of near-stability. Star Wars, which had played downtown for several months the previous year, is the obvious explanation for this, and maybe the growth past 1900 in 1979, but how they found us is anyone’s guess; as far as I remember, Boskones then didn’t do much advertising because there was no obvious place for it. Later this led to strains on the committee, and finally to the Boskone from Hell, but at the time growth seemed like an unalloyed good; in 1979 it meant we could take all of New England’s largest hotel, instead of just working the fringes around the biggest ballrooms.

The immediate effect for me was that the RISFA Players had to do three performances in a row of the latest Anderson-Keller musical, Rivets Redux, in order to seat everyone who wanted to see it. I was playing Charles Dexter Ward (one of several obsolete characters in search of new employment), but also served as producer, something resembling music director, and technical director; this last required coming up with a representation of the appearance of the mother ship from Close Encounters of the Third Kind (the previous year’s other SF blockbuster), with a jury rig that we were lucky survived all the performances. (Since this was the RISFA Players, who had first been seen in “Buckets of Gor, or Abbott and Costello Meet the Priest-Kings”, the ship appeared not to the infamous five-note motif but to “Dueling Tubas”.) In addition to the usual problems of an amateur production split between two cities (the creators and most of the cast were in Providence), we dealt with two record-setting snowstorms in the previous few weeks; the second of these shut down the city for a week, right when the entire convention was busiest getting ready. When we finally moved into the hotel we found that all the other scheduled meetings had canceled, which at least gave us a space for some desperately-needed on-site rehearsal.

Then there was the Boston in 1980 Worldcon bid. I had joined MCFI (the sponsoring organization) just a few months before, and immediately “volunteered” (i.e., I was the only person not to step back quickly enough) to find and liaise with a printer so that we’d have someone ready to do the first progress report if we won. (I just discovered that the scan of File:770 #7 is online, listing me as an “officer” of Noreascon Two due to this job.) This later led to my producing several books for NESFA Press, and editing at least one of them. I’d seen a few Worldcon bids go by but hadn’t voted before 1977; MCFI was for the time a stable group (about as many couples as singles, many in solid jobs in computers and I think averaging a little older than typical) chaired by Leslie Turek (later FGoH at Sasquan). Fandom was getting less gender-imbalanced—after the New Orleans in 1976 Worldcon bid had been torpedoed by its CVB rep (“a great place for you to hold your convention, and a great city for your wives to go shopping in!”) I estimated from published lists that the membership that heard this line at the 1974 Worldcon was about a quarter female—but it had been some time since a woman had been sole chair.

Somewhere in this timeline, Iguanacon (the upcoming Worldcon) asked MCFI and its Baltimore opposition to each take on an area of the convention; we were given the costume contest and promptly dubbed ourselves the Boston Massaquerade. I was not going to be involved with the organizing, but it was assumed (based on the aforementioned musicals, which were an outgrowth of backstage work at high-school and college theaters) that I would be tech director—Masquerades being rather less rigorous 40 years ago. (These days the TDs usually have considerable current experience.) This was the first time that a Masquerade had been held in a real theater rather than a hotel hall, and the Phoenix “Symphony Hall” came with more lights already hung than we knew what to do with—and people to focus and run them, apparently already in the budget. So the Masquerade was displayed well despite my inexperience. 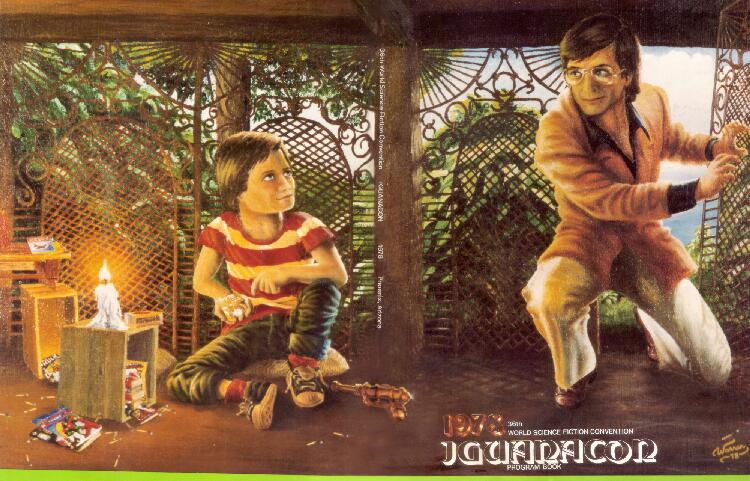 Iguanacon itself had made news for changing its chair a few months out, for reasons discussed extensively at the time, and for GoH Harlan Ellison’s steps to prevent any money being spent on his behalf in a state that had refused to ratify the ERA; despite the noise, and weather that was hot even for Phoenix over Labor Day, it had significantly more attendees than any previous Worldcon, after a few years’ pause in the steady increase that attendance had seen since the 1960’s. The abovementioned scan has discussions of some of the other uproars, but doesn’t mention the report I heard that the Art Show had to be torn down and reconstructed to allow passage from fire doors on an inner exhibit hall through the show to the doors on its outside wall. However, Iguanacon also had some innovations that are still well-remembered:

I answered a few questions from a local TV station that was interviewing people in the atrium. I didn’t see the result, but I was told later that the news item had led off with my comment about blaming my parents because they gave me Tom Swift instead of the Hardy Boys at age 8. That’ll teach me to be smart to mundanes….

MCFI threw parties (on a much smaller budget than nowadays, although large enough that we used the rooms’ swivel chairs as impromptu dollies for ice) and hung hundreds of feet of computer-printed banners (one of the few reasons to miss old-fashioned line-printers and their fan-fold output) on the stacks of railing around the abovementioned atrium. At one of the parties I met the only other ancestral Hitchcock I’ve run into in fandom. (It’s an old name, but not common.) We were pronounced the winner after a notoriously humorless business-meeting chair first announced that a hoax bid (of which there were several) had won. The next day, somebody at our advance-sales table started a conversation with Spider and Jeanne Robinson, who had just won a Hugo for “Stardance”; the result was a performance, called “Higher Ground”, which showed some gravity-bound idea of what stardance might be like.

This was in the early days of airline deregulation, when the cheapest fares required staying for a week, so a lot of us hung around in the hotel lobby until it was late enough Tuesday night to go to the airport for a flight one minute into Wednesday. It turned out groups of us were taking two different airlines’ flights through O’Hare, so we blearily wandered into each other around dawn on Thursday while waiting for our connections.

And a ridiculously long chain of inattentions and coincidences had led to my singing in a chorus behind the the Boston Symphony Orchestra at Tanglewood (their summer home) just days before leaving for Phoenix; I ended up chorusing a handful of concerts with the BSO over the next several years. So when I got home from Iguanacon I was full of beans but had no idea how busy my life was about to get.