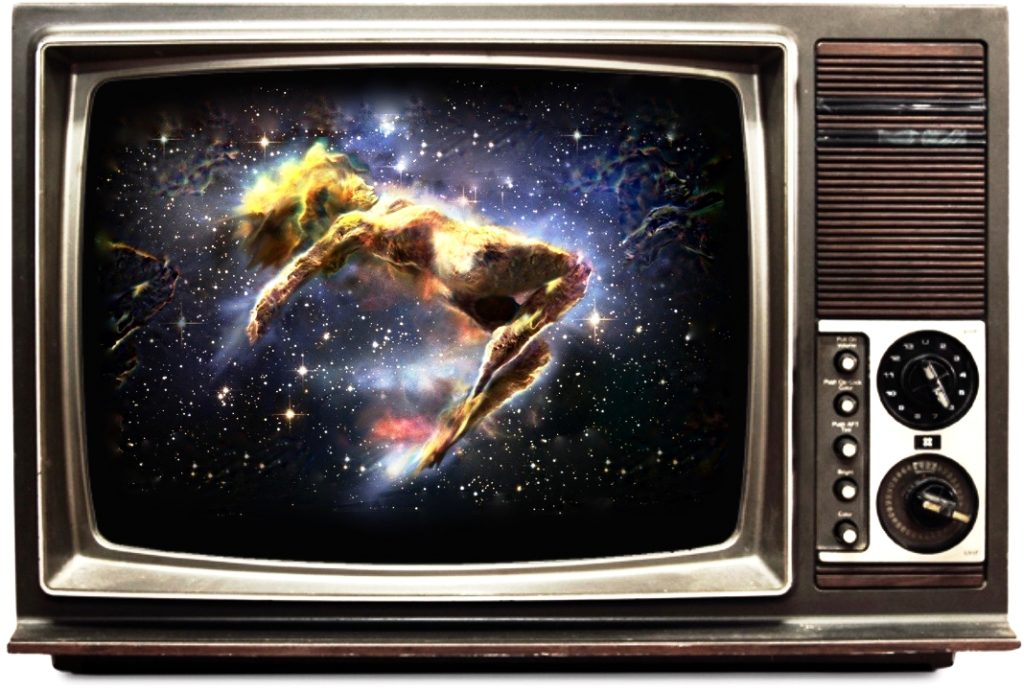 By Martin Morse Wooster: Imagine you’re an astronaut, who has just landed on a new planet.  You take off your helmet, after making sure the air is breathable, and you’ve landed in your dead parents’ living room!  And you can talk to your dead parents, and ask them questions!

“Do you wish I’d mourned you differently?” asks the astronaut, whose name is Iris.

That’s the way The Interstellar Ghost Hour by Kathleen Akerley, begins, in a play produced by Longacre Lea at Catholic University’s Callan Theatre.

The 80-minute first act juggles a lot of balls in the air.  You have astronaut Iris, who is trying to ask her parents questions she didn’t ask them when they were alive.  Her parents offer cryptic answers before keeling over and periodically reviving.

But behind Iris and her parents is a giant TV set.  Broadcast on the TV is a cooking show with Hammurabi—you know, the Babylonian king, who for some reason is wearing a basket on his head (or what one character calls “hat froufrou”).  The ancient Babylonian has a reality show called Cooking With Hammurabi, in which contestants try to come up with recipes that match his laws.  One contestant wins the round where you are supposed to come up with a recipe that matches the ancient law of “an eye for an eye” by offering a soup with two eyeballs in it instead of the traditional one.

A subplot involves another ancient Babylonian, whose name I didn’t get, but who wrote the first cookbook.  He shows up in Iris’s parents’ living room, theatrically stirring an empty bowl and offering cryptic comments about cooking. 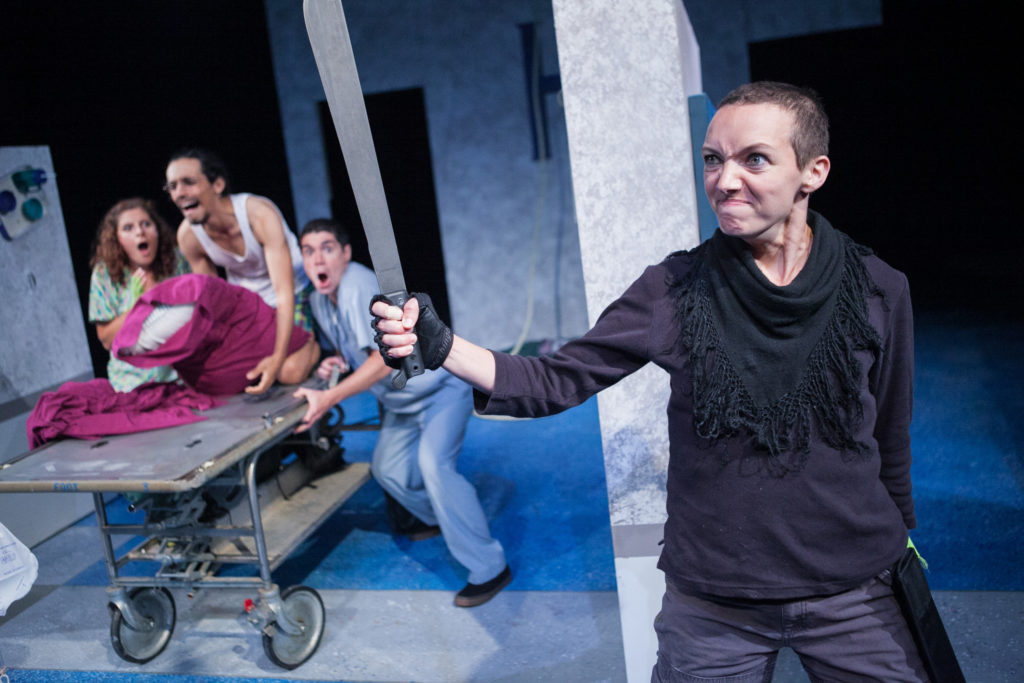 Finally there are occasional ghost hunters, who look very confused.

What’s going on here?  The nature of The Interstellar Ghost Hour becomes very clear in the second half, which I won’t give away, except to say that the frequent rumbling made by the thunderstorm that happened during the production was a very appropriate free sound effect.

Was it any good?  Let me explain what happened during intermission.  We were in the experimental theatre at Catholic University, which was separated from the bathrooms by an open corridor.  Because the rain was very heavy, we stayed inside and were led down some stairs and into the main theatre at Catholic, where they were rehearsing Oscar Wilde’s The Importance of Being Earnest.

“Can we start from ‘I have the gravest doubts?’” the director said.

“I have the gravest doubts,” said an actress in a pretty bad British accent.

Do you know “Bibliomancy,” where you thumb through a Bible for a random passage that might offer important advice?  Well, this was…theatreomancy!  Yes, Oscar Wilde had, after over a century in the grave, emerged from the tomb to give his review of The Interstellar Ghost Hour!

I think Wilde, as usual, was a little harsh.  The Interstellar Ghost Hour was a long fly ball that was pretty when it soared but was not a home run.   Akerley has a lot of skill as a writer but the play could have been cut by 15 minutes and I was never quite clear why all the Babylonian bits were there except to add spice to the weird first act.

Let me say something nice about Kathleen Akerley.  Last month I went to a play by an author I will not name except to say that the author is well-known to theatre lovers and is a MacArthur “genius grant” winner.  The company who produced the play asked for my reaction and I said the 100-minute play was the worst six hours I had spent in the theatre in some time.

The Interstellar Ghost Hour didn’t seem like six hours to me.  Kathleen Akerley has a lot of talent and I hope she continues to swing for the fences.  Someday she will hit a grand slam.