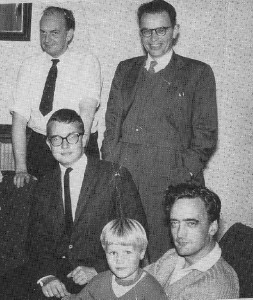 Movie critic Roger Ebert died April 4, two days after announcing his cancer had returned and he would be stepping back from work as a reviewer. He was 70.

As lights are said to do, he burned brightest at the end, writing more reviews in the last twelve months than any other year of his career.

Ebert openly identified himself as a science fiction fan — especially if he had something negative to say about a science fiction film. Although in that context he was merely placing himself on a par with other aficionados of Lucas and Corman, his trufannish roots extended all the way back to the fanzine fandom of the 1950s.

Ebert was born in Urbana, Illinois in 1942. As a child, he wrote and published a hektographed neighborhood newspaper. After a couple of university students gave him a cardboard carton filled with old Astoundings he became an omnivorous reader of all the sf prozines. He even started doing proto-fanac, writing a letter to the editor of Imagination that ran in the December 1957 issue.

Through Amazing he discovered fanzines, sending 10 or 20 cents to the Coulsons for the latest Yandro. He met fans through the mail, and recalled those heady days in his fannish autobiography, “Thought Experiments: How Propeller-Heads, BNFs, Sercon Geeks, Newbies, Recovering GAFIAtors and Kids in the Basements Invested the World Wide Web, All Except for the Delivery System” —

He produced a fanzine of his own, Stymie, “cutting the ditto masters on an old L.C. Smith and paying an office supply company a few bucks to run it off for me.” How many issues of Stymie were there altogether? The Eaton Collection lists two, both from 1960.

The first fan Ebert met in person was Wilson Tucker He lived in Leland, a hamlet south of Bloomington, not far from Urbana.

We rented “Destination Moon” and showed it in the auditorium, we went to a speech on the campus by Clarke and got his autograph, and we made a tape recording of H.G. Wells’s War of the Worlds, complete with sound effects and a performance by my classmate Dave Stiers, who later became David Ogden Stiers of M*A*S*H.

As a university student, he belonged to ChUSFA, the Champaign-Urbana Science Fiction Association.

But Ebert became progressively more interested in journalism, working as a reporter and starting his own arts tabloid. Fanac took a back seat and he eventually gafiated — although not before a taking a couple of memorable trips to meet out-of-town fans.

In the summer of 1961, now a university student, he flew to Europe on a charter flight and visited Walt and Madeleine Willis at home in Belfast.

They invited me to tea–tomato sandwiches and Earl Grey–and took me around to meet James White, another of Belfast’s BNFs (Big Name Fans), whose prozine collection was carefully wrapped in brown parcel paper, year by year, and labeled (“F&SF 1957″). Fandom was a secret society and I had admission to friends everywhere who spoke the same arcane language.

The next year he visited South Africa. He stopped over in New York and had dinner with several fans, among them the Lupoffs (of Xero fame) and Ted White, who would later buy two stories from him for Fantastic – “After the Last Mass” and “In Dying Venice,” both published in 1972.

Ebert joined the Sun-Times part-time in 1966 while pursuing graduate study at the University of Chicago and got the reviewing job the following year.

His 1975 Pulitzer for distinguished criticism was first, and one of only three, given to a film reviewer since the category was created in 1970.

He often worked mentions of his Pulitzer into his writing, but also reminisced, “Today I can see my name on a full-page ad for a movie with disinterest, but what Harry Warner or Buck Coulson had to say about me–well, that was important.”

He provided the introduction for Richard Lupoff’s The Best of Xero, published in 2004.

As America’s best-known film reviewer, Ebert’s major health problems toward the end of his life were widely covered by the press. However, he denied being an inspiring figure. In a January 2011 e-mail to the Associated Press he wrote, “You play the cards you’re dealt. What’s your choice? I have no pain. I enjoy life, and why should I complain?”