Samanda B Jeude, who helped create the early convention disability access services organization that became Electrical Eggs, died July 3 at the age of 69.

Jeude was predeceased by Donald (Dea) Cook, her husband of more than 30 years, in 2018.

Jeude’s account of her life and fanac was featured by Camille Bacon-Smith in Science Fiction Culture, an account that might be too grim for anyone else’s obituary, but it was part of Samanda’s oft-repeated public testimony about her time and work in fandom.

As an infant, Samanda Jeude suffered a severe case of polio that led to years of surgery and “working through the pain” to achieve her goal of independence. Jeude says:

“When I was seven … I overheard my parents talking with the doctor . . . this was in 1959 …and the doctor said, well, let’s be realistic. No man is going to want to marry her, her body is twisted, it’s distorted, it’s ugly. She will never reach thirty, she will probably be on a body board by the time she would be in high school.”

Things began looking up in college. She was reading science fiction-by the bale, she says-and fandom found her.

“[S]omebody said, why don’t you come to a con with us. OK, fine, I’ll go to a con with you. What’s to lose? This was back in the good old days when you could get in for five bucks…. I think there were fifteen of us in the room. We walked into what was Rivercon I [1975].”

…Jeude continued to attend conventions and found, to her surprise, that people remembered her, and liked her for who she was rather than feared her disabilities. And through fandom she proved that long-ago doctor wrong on all counts: Jeude married Donald Cook and moved to Atlanta, where the couple worked on the four-year process of bidding for and holding the Atlanta Worldcon of 1986.

But her physical condition had begun to deteriorate. In 1984, at a symposium of doctors treating polio survivors, she discovered that her condition was not unique, and even had a name: post-polio syndrome. Still, Jeude refused to let her disability stop her:

“I got thrown into a [motorized) three-wheeler. And three weeks later we went to Rivercon… and everybody who saw me said, ‘Oh, we are glad to see you, you look great.’ A couple of total strangers came up to me and said, ‘Gee, you are as gorgeous as everybody told me.’ Total bullshit. And it suddenly began to sink in on me that this was a good thing. I wouldn’t be able to walk at conventions anymore, but l could go to them again…

“And about that time l met Esther Breslau. And Esther is also a polio survivor, but at this point she doesn’t have the syndrome. And we both were really ticked off that Baltimore [Constellation, the 1983 Worldcon] was trying their best and it was impossible to get around. So we started thinking about it [services for the handicapped at conventions] in ’84…. In ’85 …we did up some guidelines and Esther tried out the guidelines at Chilicon, which was the NASFIC. [LoneStarCon ]… We tested it at Confederation [Worldcon 1986]… and they gave us money to start up Electrical Eggs. And the name came because I was trying to tell somebody about my new electric legs, and I had the hiccups. Don said, ‘Great.’ Eggs are one of the strongest structures in nature, and yet it is very fragile. Perfect name for the organization.”

Jeude’s article “They Only Handicap The Best Horses” for the 1986 Worldcon program book (page 79) sought to make disabled fans visible and gave extensive recommendations for interacting with them at the con. Ahead of the convention they distributed a “Handicapped Access Form” in a progress report, canvassing members about any support they might need. (Bear in mind this is pioneering work using terminology of 40 years ago.)

The charter for Electrical Eggs so named was drawn up in 1986. The original user’s handbook written in 1985 was revised and improved in 1989. An Electrical Eggs UK group was established in 1995 and launched at Intersection, the Worldcon in Glasgow. Special art and logos were designed for Electrical Eggs by Jack Meacham and Frank Kelly Freas.

Camille Bacon-Smith ends her passage about Electrical Eggs with this valedictory:

“A long time ago, when I was writing, I told Gordy Dickson I wanted to pay him back for all the enjoyment I’d had from his books, and Gordy’s response was, ‘Never pay back in fandom, pay forward. Don’t thank me, thank the people who are going to come into your life you’re going to like …’ So I figured, Egg was my way of paying forward.”

In the process of paying forward, a woman whose Life doctors wrote off when she was seven has achieved status and prestige in her science fiction community. In doing so, she has made life better for that community. 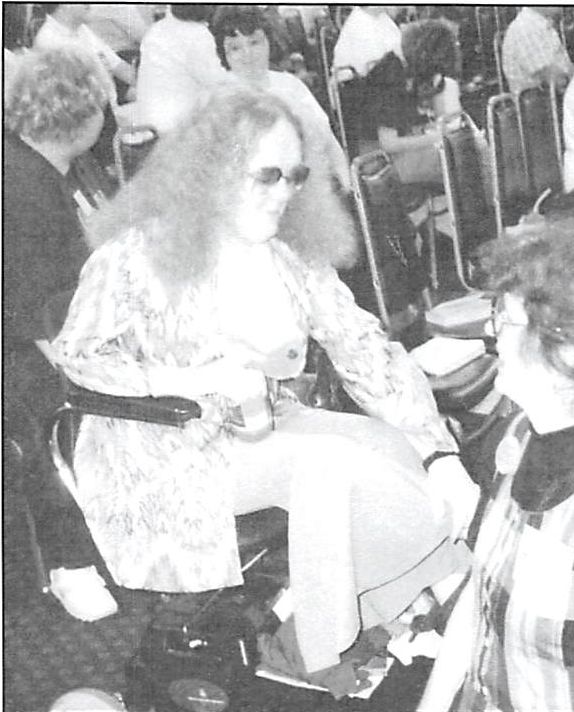 Apart from the disgraceful way some sought to belittle Jeude during her unsuccessful TAFF candidacy in 1995, she was revered by most other fans. She was guest of honor at Rivercon XVIII (1988), Chattacon XVII (1992), and Balticon 31 (1997). She won Southern fandom’s Rebel Award in 1991 and was presented the Georgia Fandom Award at Dragon Con in 1994. She received the Big Heart Award, our highest service award, at the 1992 Worldcon.