By Mark L. Blackman: On the evening of Wednesday, December 20, 2017, in the pause between the end of Chanukah and the arrival of the Winter Solstice, the Fantastic Fiction Readings Series hosted readings by authors N.K. Jemisin and Christopher Brown in the Red Room at the KGB Bar in Manhattan’s East Village, where Christmas wreaths and lights mixed incongruously with red walls and Soviet era-themed décor.  (“On the first day of Marxmas, the Party gave to me …”)

Customarily, as the audience settled in, award-winning editor and the Series’ co-host Ellen Datlow whirled around photographing the crowd (her photos are posted on the Series’ website,  Series’ website; mine accompany this report).  (Contrary to the belief of some, she had not remained in the Bar during the two days since Monday’s launch party there for her new anthology, Mad Hatters and March Hares.)

All dates are the third Wednesday of that month and, of course, in 2018.  (Further details may be found on the Series’ website.)  He then introduced the first reader of the evening.

Christopher Brown (not to be confused with the R&B singer and Rihanna’s ex) is the author of the 2017 novel Tropic of Kansas, which was recently nominated for the Compton Crook Award, and a World Fantasy Award nominee for the anthology he co-edited, Three Messages and a Warning: Contemporary Mexican Short Stories of the Fantastic.  His next two novels will lead off a series of speculative legal thrillers (fittingly, he practices technology law) set in the world of Tropic of Kansas.  He read from the beginning of Tropic of Kansas, which, he related, was called by two reviewers “the feel bad novel of the year.”  Set in a near-future dystopia (as opposed to the current one) where a crackdown on terrorism in the wake of a series of attacks, the young protagonist, Sig, is deported from Canada and detained in a prison camp that was formerly the Mall of America, and from which he plans an escape before he can be sent to a labor camp in Detroit. 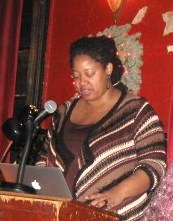 After an intermission, Datlow introduced the evening’s second and final reader.  N.K. (the “N” stands for Nora)  Jemisin is the author of the Broken Earth Trilogy, the first two books of which (The Fifth Season and The Obelisk Gate) received the Hugo Award for Best Novel (making her the first black person to win that Hugo), the Inheritance Trilogy, and the Dreamblood Duology.  She has also won a Locus Award for Best First Novel, and, in addition, her work has been nominated for the Nebula and World Fantasy Awards, and shortlisted for the Crawford, the Gemmell Morningstar, and the Tiptree Awards.  On top of all that, she writes the Sunday New York Times’ science fiction and fantasy book review column, “Otherworldly.”

In a special treat, and fighting bronchial problems, she shared the revised version of an unpublished short story, at present entitled “Give Me Cornbread or Give Me Death.”  Continuing the evening’s dystopian theme (where was the season’s merry jollity?), we were shown a future where the powerful inhabitants of Towers dominate, ruling by fear and dependency, and have genetically tweaked frogs (as in the Plague in the Book of Exodus) into drug-sniffing dragons.  Rural black raiders, however, have co-opted the dragons, diverting them from eating dark-skinned people with what sounded like soul food (this is a serious story, she reminded us).

At the back of the room, copies of Tropic of Kansas and books by Jemisin were for sale from the Word bookstore of Greenpoint, Brooklyn and Jersey City, NJ.  Much of the audience hung around for a while afterward, then likely headed out for dinner.