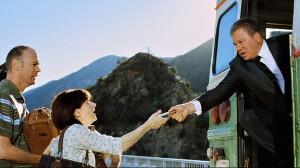 William Shatner’s franchise characters always have a good, long run. He played Captain Kirk in four different decades before Kirk’s heroic demise in Star Trek Generations. Now Shatner’s Priceline Negotiator has suffered a fiery ending to what proved a literal five-year mission. (This was the most recent iteration of Shatner’s role as Priceline’s public face over the past 14 years.)

The Negotiator is gone because Priceline is adopting a new fixed-price business model.

Shatner’s character meets his demise in a fiery tourist bus explosion possibly inspired by the unresolved predicament that closes the 1969 version of The Italian Job, with a bus teetering over the edge of a cliff, but in the Priceline commercial taken to the worst possible outcome.

A video of the commercial is available at this link.

3 thoughts on “Shatner Goes Down in Flames”