(1) Grantland may be a page at ESPN.com but its writers are wise in the ways of Game of Thrones:

In Westeros, a family isn’t something to love, it’s something to plug up the holes in the world, a tool you use for balance to keep yourself upright and everything else from falling over.

(2) And Grantland’s Katie Baker offers this advice for watching the show:

Then the third week I tried a tip from a friend of mine — to turn on closed captioning during the show — and it was honestly life-changing, albeit totally dorky. It’s great not even just for learning characters’ names, but for keeping straight where they are or where they’re going. I highly recommend it. The other night, it was all:

[‘Rains of Castamere’ begins to play.]

(3) Neil Gaiman’s “Make Good Art”, his 2012 commencement address at Philadelphia’s University of the Arts, is influencing a generation to express themselves and make choices that move them closer to their dreams. A full transcript is here:

Something that worked for me was imagining that where I wanted to be – an author, primarily of fiction, making good books, making good comics and supporting myself through my words – was a mountain. A distant mountain. My goal.

And I knew that as long as I kept walking towards the mountain I would be all right. And when I truly was not sure what to do, I could stop, and think about whether it was taking me towards or away from the mountain. I said no to editorial jobs on magazines, proper jobs that would have paid proper money because I knew that, attractive though they were, for me they would have been walking away from the mountain. And if those job offers had come along earlier I might have taken them, because they still would have been closer to the mountain than I was at the time.

(4) The current record for the most people wearing a Superman costume at the same time is 556, set at Sears Headquarters in Chicago a week ago.

Last weekend, Metropolis, IL failed in its attempt to regain the record. Only 268 Supermen showed up. Maybe the town needs more phone booths?

(5) The University of Southern California Libraries Digital Collection holds hundreds of negatives of photos published in the Los Angeles Examiner during the 1950s. Surprisingly, the paper covered the 1957 Westercon. Not surprisingly, it focused on babes-and-BEMs. Why, look — here is Marjii Ellers gazing at a bug-eyed monster. 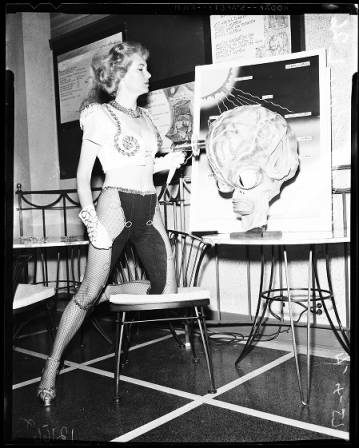 Marjii Ellers at the 1957 Westercon.

(6) The earliest known use of iron in Egypt is a  5,000-year-old bead that analysis shows was made from a meteorite. The bead was found in a grave in Gerzeh, about 43 miles south of Cairo. An article in the journal Meteoritics & Planetary Science states:

The beads from the tombs at Gerzeh are older than any other iron artifact recorded in Egyptian history; they appear to be the most ancient example of worked metallic iron from a region and time with no known worked indigenous source of iron or contemporary record of trade in iron goods

(7) In the future, it will definitely take longer to get to and from the station than you’ll spend in transit, even when you’re going from coast-to-coast:

A company called ET3 has plans in the works for the Evacuated Tube Transport, a high-speed transportation tube that uses magnetic levitation. The ETT can travel at speeds of up to 4,000 miles per hour, and each tube seats a maximum of six people and comes with a baggage compartment. How does it go so fast? It’s airless and frictionless and could have you from New York to Los Angeles in 45 minutes, as opposed to the nearly five hours a direct flight would take.

(8) Stephen King said in his memoir On Writing that he believes in God. In a recent NPR interview he advocated intelligent design:

During the exchange, King had some interesting words for atheists and those who are unsure about the existence of a higher power. In particular, he charged that these individuals miss all of the signs that overwhelmingly point to structure.

Writing isn’t about making money, getting famous, getting dates, getting laid, or making friends. In the end, it’s about enriching the lives of those who will read your work, and enriching your own life, as well. It’s about getting up, getting well, and getting over. Getting happy, okay? Getting happy.

You mean – Dead Poets Society lied to me?

It looks like Archie, Betty, Veronica and the rest of the gang in Riverdale may be finally coming to the big screen, but with one little twist – they’ve somehow landed into the middle of a zombie apocalypse. But it’s probably nothing Jughead can’t get through as long as he has a couple of sandwiches.

It’s Aguirre-Sacasa’s participation in the project that makes things especially interesting: he recently wrote the scripts for an “Archie” comic spinoff series called “Afterlife with Archie,” in which Jughead attempts to revive his dog Hot Dog after the pooch is hit by a car. Jughead accidentally transforms the dog into a zombie, and when Hot Dog bites a few people, suddenly everything in placid Riverdale is turned upside down as the living dead take over.

“We can only hope that this winds up in Development Hell (pardon the pun) and never gets made,” opines David Klaus.

(11) Out of fairness to Penguin books, Petréa Mitchell hopes you will look at Random Penguin and see it’s not all clip art, they honestly do some quite lovely covers.

[Thanks for these links goes out to David Klaus, Petréa Mitchell and John King Tarpinian.]