Can anyone sound more jaded than the folks at Geekologie?

Star Wars Episode VII… [will] be released in theaters on December 18, 2015. The story will pick up some 30 years after the events of Return of the Jedi. What happened in those 30 years? Apparently nothing worth making a movie about. At least not until they finish this trilogy and backtrack again for Star Wars Episode X: The Wonder Years. Just like I did for all the disappointing prequels, I will be watching these on opening day, dressed in character. Which character remains to be seen, but I’m leaning towards Data or Worf.

(2) Here’s the brew they should order when they’re out drinking after the premiere – Klingon Warnog.

The wait is nearly over, Klingons and Klingon lovers. Klingon Warnog — the first Star Trek themed beer to hit the U.S. — can soon be yours. Brewed by Tin Man Brewing of Evansville, Indiana, Klingon Warnog will incorporate rye malt into a modern Dunkelweizen grain bill, creating a flavor profile that is both familiar and unique.

As the Federation of Beer folks put in brewing-ese, Warnog’s aroma is predominantly mild banana and clove produced by the German wheat yeast, supported by subtle sweet malt character from the use of Munich malt. The flavor draws heavily from the blending of the rye malt and traditional clove character, creating a very rich and unique flavor. The inclusion of wheat and caramel malts help to round out the mouthfeel of this beer, making this Dunkelweizen hearty enough to be called… a Klingon Warnog.

(3) Many things were done to promote the new season of Game of Thrones. HBO’s “Game of Thrones: Epic Fan Experience” drew 7,000 fans to Barclays Center in downtown Brooklyn. Winter had already arrived, reports the Grantland writer known as Netw3rk —

As you approach the Iron Throne of Westeros, or any reasonable facsimile thereof, you may find yourself overcome with anxiety about how you’re going to sit in it….. It’s hard not to overthink something as instinctual as your body position during the normally quotidian activity of resting your ass on something, when that something happens to be one of the most iconic symbols in the pop-culture zeitgeist and you get only one chance for a good picture….

I can now report: The Iron Throne is uncomfortable. The one I sat in was, anyway. The seat, as one would expect of 1,000 swords hammered into the shape of a chair, is hard on the ass, but also narrower than you’d expect, and high. I tried to cock my torso over at an angle toward one of the armrests, elbow on the rest, hand under chin; kind of a Joffrey-meets-Biggie thing. But the circumscribed butt support area didn’t allow for the right body angle, and the result was much more Tin Man–meets-dirtbag than chilled-out sovereign. Alas.

(4) Meantime, George R.R. Martin’s story is now inspiring parents to name their babies after his characters:

Perhaps no Game of Thrones character is as beloved as Daenerys Targaryen (played by Emilia Clarke), the daughter of a slain king who has spent most of the series to date amassing forces to reclaim the lands that were once her father’s. Also she has dragons, which people seem to like.

So it’s not too surprising that fans of the show would name their kids after her. According to data from the Social Security Administration, were 21 newborns in 2012 named “Daenerys,” which was never used enough in previous years to show up in official counts (for privacy reasons, the SSA only releases numbers for names used five or more times in a given year).

But wee baby Daeneryses were dramatically outnumbered by newborns named “Khaleesi” — the title Targaryen earned when she married Dothraki leader (or “Khal”) Drogo. 146 “Khaleesi”s were born in 2012, making it more popular as a full name than “Betsy” or “Nadine.”

Seeing that photo of a Martian rover’s shadow made James H. Burns ask:

What is it about this type of image that gets me so thrilled? I suppose it’s the basic notion of a man made creation, a miracle really, doing something so simple, and capturing it so gloriously, in what really are such fantastic circumstances. (And only the most callow lad, I think, would term this the echo of an Aresian “selfie”!)

(6) Years ago PC owners were asked to volunteer to process packets of data for the Search for Extraterrestrial Intelligence because SETI didn’t have enough computer power to do it all. Data processing power has zoomed ahead since then. Now a university is hosting an online tool that allows people to build entire custom universes and update these virtual models as new survey telescopes and instruments become available.

Swinburne University of Technology has launched a free online astronomy virtual laboratory that will allow scientists to build complex customised views of the Universe, all from the comfort of their own computer.

The Theoretical Astrophysical Observatory (TAO), funded by the Australian Government’s $48 million NeCTAR project, draws on the power of Swinburne’s gSTAR GPU supercomputer to allow astronomers to simulate the Universe and see how it would look through a wide range of telescopes.

(7) If – like me – you were unaware of the existence of Ultraman until you saw him posed beside the Hugo rocket on Nippon 2007’s award, then you probably also don’t know about Japan’s kaiju-themed restaurant filled with Ultraman paraphernalia.

(8) You probably haven’t forgotten that things didn’t go well for Loncon 3 when they announced Jonathan Ross as Hugo emcee. Now who will they ask? Milt Stevens knows who he would pick —

Loncon 3 has a problem. They need a Hugo Award Ceremony Host who can take a lot of heat. I have an idea for the perfect choice. Marvin the depressed android from Hitchhiker’s Guide. He can sneer at organics and get away with it. Marvin was played be English actor Warren Davis who might be available for the worldcon.

I’ve emailed my suggestion to the committee. 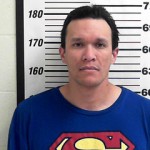 (9) The suspect’s name and the shirt he wore reminded people of Superman — but not his act. Christopher Reeves was busted for driving under the influence by local cops in Utah.

He wasn’t faster than a speeding bullet, so Davis County deputies were able to catch a man wearing a Superman shirt on I-15 early Tuesday morning, and arrest him on suspicion of drug trafficking.

Davis County Sheriff’s Office spokesperson Sgt. Susan Poulsen told the Clipper 33-year-old Christopher Jaye Reeves of Layton was spotted weaving and speeding through traffic on northbound I-15 at around 3:00 a.m. by a deputy on patrol.

Poulsen noted the similarity of the suspect’s name to the late actor Christopher Reeve (without the ‘s’) and specified that he has no relation to the man made famous by portraying the comic book superhero in movies before his death in 2004.

He’s no relation to George Reeves, either, who played Superman in the 1950s TV series Adventures of Superman.

(10) What flavor of politics do science fiction fans like best? I think we’ve learned that we can predict the answer to this rhetorical question if we know who’s asking. For example, no one will be surprised to learn that The Guardian finds Britain’s Liberal Democrats to be the party of trufans. (Trufans defined as viewers of Doctor Who, but then, I told you it was The Guardian.)

Some American fans would answer that question with “the Libertarian Party.” David Klaus writes:

I remember the first unsolicited fanzine I ever received, back in 1972, a copy of the late Irvin Koch’s Maybe, in which he noted the founding of the Libertarian Party earlier that year, and stated that he thought most sf fans would be interested in it, or words to that effect. Irv was a generalist fan, inclusive, not given to sectarian fan wars — he even was the contact for his local Church of All Worlds nest.