To keep track of the various test locations for nuclear explosions, the government started numbering sites using the word “Area” and a number. The locations were numbered in an apparently random order, with the Atomic Energy Commission personnel initially assigning numbers for identification purposes.

There’s a map of the Areas at Today I Found Out:

Note that not every numeral between 1 and 30 appears on the NTS map. Notably missing are 13, 21, 24 and 28; nonetheless, these numbers were apparently used to designate areas for atomic testing in the region – albeit outside of the set-aside NTS zone. For example, an “Area 13? was designated just northeast of the NTS in the NAFR, while “Area 24? refers to the North Las Vegas Facility, a satellite site of the NTS managed by the National Nuclear Security Administration’s Nevada Site Office (NNSA). “Area 28? was originally designated in the southwestern part of the NTS in the vicinity of areas 25 and 27, into which it was absorbed

(2) What is the biggest role Sean Connery ever turned down? Moviepilot ranks this number one —

Gandalf is undoubtedly the biggest role that Connery has ever rejected. He, understandably, regretted turning down both turning down the role of Gandalf and not taking part in The Matrix, which is the main reason why he joined the cast of The League of Extraordinary Gentlemen.

Sir Sean Connery explained that he passed on the role of the wizard because he did not understand the material and had never read Tolkien. Too bad for him because he would have made a staggering $253 million (an estimation) from the role.

(3) Some neighborhoods have rules to prevent RV’s from camping out in people’s driveways. Perhaps that’s the logic behind this homeowners association telling a couple to move their TARDIS.

A Florida family said they obeyed an order to have their TARDIS, the iconic blue box from sci-fi series Doctor Who, travel through time and space to the garage.

Parrish residents LeAnn and David Moder, whose life-sized replica of the Time Lord’s preferred mode of transport was built for their Doctor Who-themed wedding, said they received a letter recently from their homeowner’s association ordering them to remove the time-and-space vessel from their driveway.

(4) There are days when Mars is warmer than Green Bay.

But as of now, the NFL has scheduled no football games there…

(5) Artist Mike Hinge is remembered in an extraordinary digital collection of his work at The Tenth Letter of the Alphabet. There are many reproductions of his book and magazine covers, and the typefaces he designed. There are also links to other Hinge pages.

(6) James H. Burns meant to go see Godfather III that night 24 years ago but got sidetracked paging through a comics collection – which may have saved his life. Click the link to see the complete anecdote at The Comics Bulletin.

It was horrifying, of course. But also personally upsetting, because I had come as close to going to the screening as was possible, without actually going…

Update — there is now a problem with this link and it isn’t working, so Burns has reproduced the referenced article in a comment below.

(7) A Batman 75th anniversary Batman short by Bruce Timm, one of the great fillmmakers behind Batman: The Animated Series, shows what the Caped Crusader might have been like in a cartoon towards his very beginnings. In this lost tale from Batman’s past, the Dark Knight tracks a strange giant to the mysterious lair of Dr. Hugo Strange.

(8) While reviewing Agent Carter, Andy Greenwald of Grantland shows he has quite a way with words.

Rather than biding time between blockbusters, like the dot-connecting drudgery of S.H.I.E.L.D., Agent Carter travels back in it: The show is set in the years immediately following World War II, at a time when ray guns suddenly seemed as plausible as A-bombs. Second (and this is key), it actually feels like an ABC TV show: Peggy Carter, a plucky striver with a thing for powerful men — and that thing is often her fist — wouldn’t be out of place in that competing comic-book universe known as Shondaland.

(9) Daniel Finney, a Des Moines Register columnist, penned a sympathetic article about the Rusty Hevelin collection at the University of Iowa Libraries.

Please note that Hevelin was a science fiction fan. That’s science fiction written out, not “sci-fi,” which true fans of the genre say describes only the crass, commercial side of things.

They’re interested in the stories — the ideas put forth by authors, filmmakers and television producers that consider who we are and what we might become.

A true science fiction fan such as Hevelin would find it pleasant to meet William Shatner, the man who played Captain Kirk on “Star Trek.”

But he would be absolutely in orbit to discuss the scripts of Harlan Ellison, who wrote the original script for the Hugo Award-winning 1967 “Star Trek” episode “The City on the Edge of Forever.” 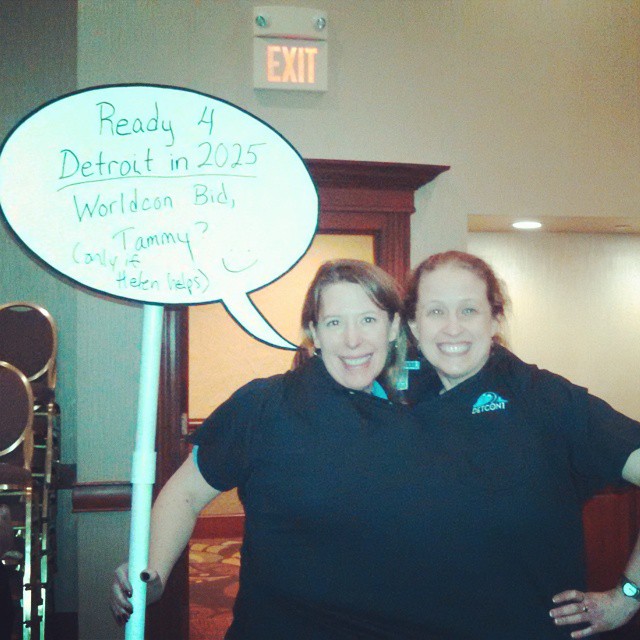 If that pair was really bidding, I’d vote for them!

The symptoms were grim: advanced age, crumbling physical condition, broken spine. The operation would last several hours and require meticulous care. But recovery was likely, and the procedure would cost only $100.

The patient was a 90-year-old family Bible in need of major restoration.

“I always tell people that I compare book restoration with face-lifts,” said Bruce Kavin, one of three siblings who run Kater-Crafts Bookbinders. “Generally speaking, the less you do, the better.”

The Pico Rivera company has survived for 66 years while many other bookbinding companies have failed. But it hasn’t been painless. Where 100 people once worked, now only a dozen ply the trade.

(12) The Lego Movie was missing in action from the Oscar nominations, which provoked Mark Harris of Grantland to take a whack at the Academy’s corps of animators:

The unexpected omission of The Lego Movie from Best Animated Feature. Folks, this branch has problems. Real problems. Taste problems and maybe even some issues of clubbiness, insularity, and favorite-playing. No excuses for this one; further examination is warranted, and we’re probably at the point at which these nominations would look a lot better if they weren’t picked solely by animators.

(13) The ratings for King of the Nerds must be good enough to encourage other forays into fan/reality television. Coming soon – Last Fan Standing.

Cinedigm, which will launch CONtv as a new over-the-top channel dedicated to the Comic-Con circuit in February, has tapped Bruce Campbell as host of a new game show, “Last Fan Standing.”

Campbell, who has become an icon to Comic-Con attendees for his roles in horror films like “Army of Darkness” and “The Evil Dead,” taped his first episode of “Last Fan Standing” during the New Orleans Comic Con on Jan. 10.

In each installment, Campbell asks questions such as how much does Thor’s hammer weigh? The top four players who answer questions in a crowd get to compete for the title of the last fan standing.

… “At a live preview during Wizard World’s Chicago Comic Con last August, 600 screaming fans could barely hold their seats,” said Chris McGurk, CEO of Cinedigm Entertainment. “It was obvious to us that this would be a hit. With a host as beloved in the fan community as Bruce, there’s no better fit for CONtv than ‘Last Fan Standing.’ We think of this series as a celebration of the pop culture obsession and fan engagement that makes the CONtv audience so special.”

(14) Raw footage from a 24-minute interview with Forrest J Ackerman has been released for the first time.

In 1997, Channel 4 in the UK aired an hour long documentary titled Secret Lives – L. Ron Hubbard. We’ve posted it here at the Underground Bunker in the past, and it’s long been considered one of the better documentaries about the organization and its founder. It contained interviews with key people, such as Hana Eltringham Whitfield, who captained one of Hubbard’s ships as Scientology was run from sea in the late 1960s and early 1970s. It also featured a brief interview with Forrest Ackerman, the famous science fiction promoter who was once Hubbard’s literary agent.

And now, the raw footage of Ackerman’s entire interview — most of which did not make the finished documentary

[Thanks for these links goes out to James H. Burns, John King Tarpinian and Andrew Porter.]