(1) “Cults of an Unwitting Oracle: The (Unintended) Religious Legacy of H. P. Lovecraft” by Dennis P. Quinn covers several minor religious groups claiming a link with Lovecraft’s Mythos, and mentions others associated with different sf/fantasy writers such as the Heinlein-inspired Church of All Worlds, and Star Wars. There is irony in this, so the author tells us, because “Lovecraft considered his own philosophy to be based on a ‘cosmic indifferentism’ in which there are no gods here to help us.”

Legacies are a bit like children. We wish them well, but have very little control over them.  And although we are most of the time happy to even have one, a few wind up becoming an embarrassment. Take, for example, the strange case of Howard Phillips Lovecraft (1890-1937), who, if he were still alive, would be celebrating his 120th birthday on August 20, 2010. Of the various legacies to which H.P. Lovecraft lays claim, one turned out to be a set of fascinating individuals and subcultures that find religious inspiration in this most creative, though irreligious parent….

(2) Scott Edelman posted a link to the illustrated guide explaining what to do if you meet aliens — presumably the kind in Spielberg movies rather than the ones in Lovecraft stories:

We’re not saying that when it finally happens it’ll happen to you. But on the other hand, it might. You COULD be the person who gets to make first contact with aliens. Don’t you want to make sure you don’t screw it up?

(4) The Yahoo headline “Radioactive boars on rise in Germany” sounded funny to me ‘til I read the story. Seems this is a continuing consequence of the fallout released in the Chernobyl disaster.

(5) Video chain Blockbuster may be preparing to file a pre-packaged bankruptcy. Wow — not so long ago that business was such a cash cow that the company’s founder was using his spare change to buy the great baseball players who won a World Series for the Florida Marlins. (Though it was long enough that he sold the company — somebody else is suffering its death at the hands of the internet.)

(6) The two largest bookstore chains are in turmoil, with Borders laying off employees and Barnes and Noble appearing to move closer to a sale of the company. People wonder if Amazon will buy B&N to kill it off:

“Amazon has been a thorn in Barnes & Noble’s proverbial side since its inception in 1995, when it was solely a purveyor of books. B&N has consistently lost market share to its non-bricks-and-mortar rival, which has bested it on lower prices for hardcovers,” writes Jeanine Poggi, adding,”Now the battle has gone purely digital.” She notes that, by purchasing B&N, Amazon could eliminate its number one bookselling competitor.

(7) But if the Evil Internet Bookselling Empire is invincible how come the  Kindle is getting punked in the New York Times?

We know how many iPads were sold because Apple is straightforward about reporting the unit sales of all of its products. Amazon is a different story. We don’t know the size of Amazon’s Kindle business because the company is averse to disclosing details of its operations. When it reports its financial results, the company that sells just about anything that can be put in a box or sent electronically divides its businesses into just three categories: “media,” which lumps books, music and videos into one indistinguishable agglomeration; “electronics and other general merchandise,” an even larger, indistinguishable agglomeration; and “other.”

…. Sure, Amazon can talk of a future 20th-generation Kindle. But unless it’s brave enough to reveal Kindle’s actual sales numbers, it sounds as if it’s whistling past the graveyard. Dedicated word processors, purpose-built machines of the 1970s, had a good run of about 10 years.”

(7) According to danwei on Twitter, the World Chinese-Language Science Fiction Research Workshop has released its August newsletter.

(9) Annie Wu is an impressive artist! 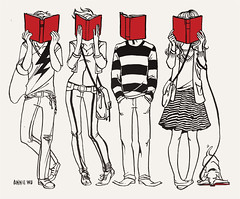 (10) Michael Dirda reviews William Patterson’s biography of Robert A. Heinlein in The Washington Post.  And at Tor.com, the publisher is running a Heinlein symposium with articles by Jo Walton, John Scalzi, etc.

(11) What are Toronto’s top minds reading this summer? Fascinating stuff. For example, Eugenia Kumacheva, Professor of Chemistry at University of Toronto recommends Eurekas and Euphorias: The Oxford book of scientific anecdotes by Walter Gratzer:

This is an insightful and entertaining book that describes the episodes of drama and comedy of scientific discoveries. Although entitled ‘an Oxford book of scientific anecdotes’, it can be opened at random to meet scientists making discoveries in prison cells or in a madhouse, the physicist dissolving his Nobel Prize medal in acid in order to prevent it from falling into the hands of the Nazis, or the battle of the female scientist with the French Academy.

(12) Dave Langford has allowed his Corflu 2010 photos to be posted on Graham Charnock’s website. Dave teases, “There are no captions, so no point in following the link unless you can recognize shifty fan characters like Earl Kemp and Ted White…” Of course I recognize them — it’s all those British fans I last saw in 1995 whose names are escaping me. And no picture of that Langford fellow, of course. (You’ll figure it out in a moment.)

(13) What fun is fandom if nobody thinks that Buck Rogers stuff is crazy anymore? I hear the local tv news neglected to make fun of the 2010 NASFiC:

“There’s the attraction of the unknown, the weird the strange the extrapolation of science, the exploration of your fantasy worlds, science fiction and fantasy has everything and we get together and talk about it,” said [GoH Toni] Weisskopf.

Gary Farber also has a few observations about NASFiC.

(14) Finally, let io9 tell you about that NSFW musical tribute to Ray Bradbury. But right here’s the place to find out “What did Ray think about it?” John King Tarpinian downloaded the video and showed it to Ray on his big screen TV last week before they went to the LA City Council session. The verdict? “Ray saw the video and thought it was ‘nice.’”

I was hoping for a more poetic reaction, but there you have it…