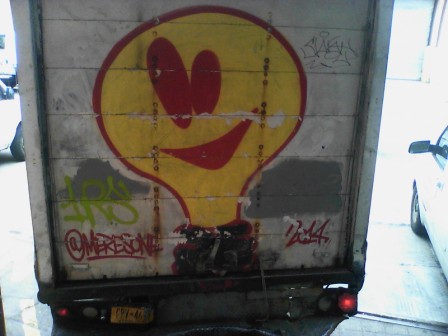 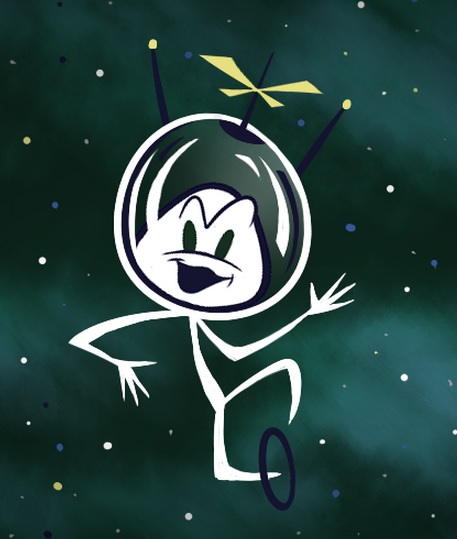 By James H. Burns: I saw Colonel Bleep on the streets in Brooklyn, yesterday. He was riding along, as I finished a mid-morning cup of coffee…

Colonel Bleep, of course, was the syndicated science fiction cartoon series, each episode roughly five minutes in length, that debuted in 1957, and somehow was still playing in New York, and other markets, through the early 1970s.

Colonel Bleep was an extraterrestrial from the planet Futura, who protected our planet from various perils with his sidekicks Squeek (a cowboy puppet boy!), and Scratch the Caveman.  While the animation was limited, there were several memorable surrealistic designs, heavily influenced by the era’s futuristic tropes.

The cartoons were a neat part of my childhood, watching them early on Saturday mornings (back-to-back with DoDo the Kid From Outer Space.)

But suddenly, amid the threat of rain, he was staring at me, from all sides of a large delivery truck…. Perhaps the resemblance was only in my mind’s eye, a happy chimera from across the decades.

But I asked the driver if he would mind if I took a photo.

He smiled and said that I had a good eye. I was surprised and asked what he meant. It turns out the illustrations were the work of Robert Cohen, a famous graffiti artist known as “Meres One.”

I introduced myself and the gentleman told me that his name was Rufino Garcia. We shook hands, and he said that, a little over two years ago, his truck had even been the subject of a New York Times article!  The faces on the Ford, a closer look revealed, were lightbulbs.

Sarah Maslin’s feature said that “the bulbs are also synonymous” with what was “one of New York graffiti’s most venerable institutions, 5Pointz, a warehouse in Queens that became a de facto museum of street art.”

Surely, the resemblance of Mr. Garcia’s and Meres Ones’ artwork to our long ago friend from the future was coincidental. But it’s always nice to run into even the memory of an old pal, particularly in the most unexpected of places! 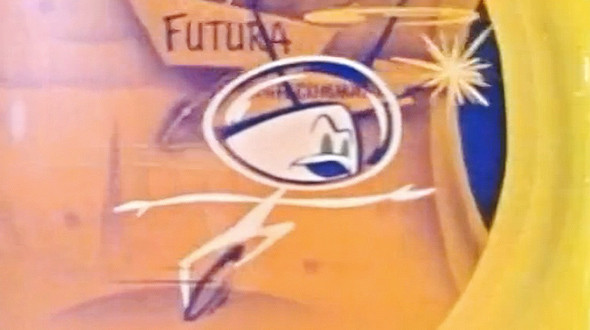 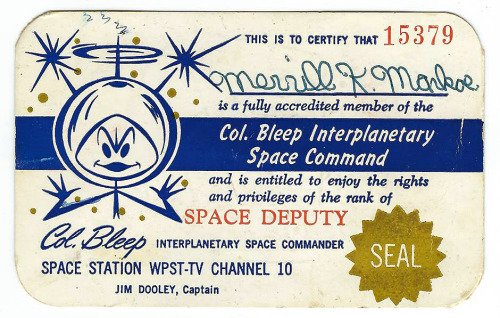 1 thought on “Space Age, on the Street”