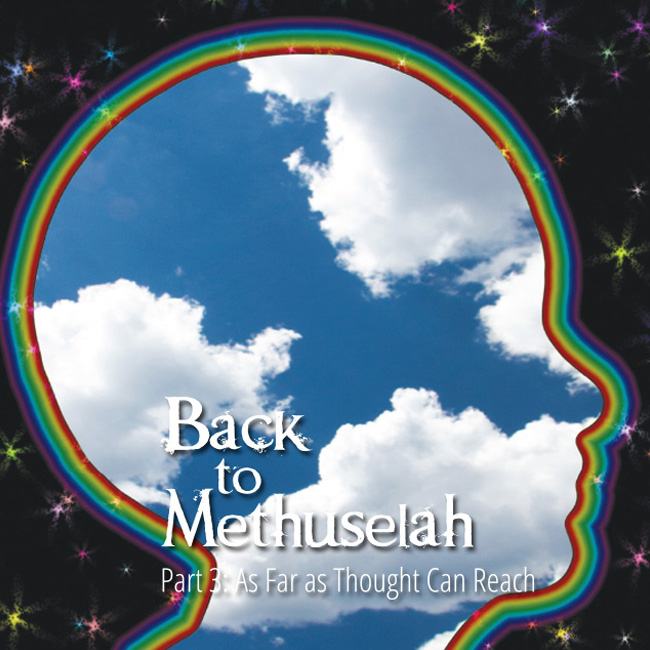 By Martin Morse Wooster: Like most cities of its size, Washington has theatres for every taste.  You have your edgy theatres, your really edgy theatres, your commercial theaters for Broadway tours, and the Shakespeare Theatre.  We even have one theater, Signature, which specializes in musicals and got Disney development money for a theatrical version of Freaky Friday.

The Washington Stage Guild specializes in traditional, well-made plays with a British accent.[1]  They pride themselves on their performances of George Bernard Shaw, and in 2014 started to perform Shaw’s Back to Methuselah, Shaw’s only full-fledged attempt to write science fiction.  Shaw wrote the play between 1918-20 and it was first performed in 1921.

The play, unabridged, probably takes between six and seven hours to perform.  Here are some indications that Shaw didn’t really expect it to be performed much.  His earlier plays have very detailed stage directions, for example, and Back to Methuselah has very sketchy ones.

As far as the Stage Guild knows, there have only been four professional performances of the unabridged Back to Methuselah:  the British and American productions of the early 1920s, one done by Canada’s Shaw Festival in 1986, and the Stage Guild’s production.  The play is in five parts, and the Stage Guild performed parts one and two in 2014 and parts three and four in 2015.   There was an abridged version of the play done on Broadway in 1958 and the BBC did a five-part dramatization in 1952.

The Stage Guild’s current production is part five of the play, subtitled “As Far As Thought Can Reach” and set in the year 31,920.

Back to Methuselah begins with Adam and Eve and then leaps to contemporary Britain, where a process is discovered that can extend the human lifespan to 300 years.  In parts three and four, longevity becomes commonplace and the British Empire moves its capital to Baghdad.

Having now seen the whole thing, I can say there’s an additional reason the play is performed very rarely—it’s not very good.

Do you have a friend you really care about and who was once full of zest for life, but as he’s gotten older would much rather discuss his prostate or the miracle superfoods he’s seen on TV commercials then the books he’s read?  This is what happened to Shaw here.  He wrote the play when he was in his sixties, and he’s turned, ummm, crotchety.

In the future Shaw describes, people come from eggs and when the egg cracks, a 20-year-old hatches.  Adults then live for four more years, and Shaw thinks it hilarious that a ”four-year old” who’s actually 24 can love a much younger “two-year-old” who’s 22.  After they turn four, they then become “ancients” and live on for 700 more years.

There’s science in this play, but Shaw talking about science is like me expounding on the foundations of mathematics: it takes very little for Shaw to blither.  For example, at one point there are some robots created (well, “automata” since the term “robot” hadn’t been invented) with brains that run on “keyboards.”

In the middle of the play, a character dies, and is cremated in a “million-degree furnace.”  Why does the furnace heat up to a million degrees instead of the several thousand degrees it takes to burn a human body?  Shaw doesn’t say.

There’s some speculation on the nature of art, but the dialogue is quite wan.  The second part of Back to Methuselah, set in contemporary times, almost matches the crackling wit of Shaw at his best, but in this installment, since Shaw really can’t visualize what life would be like in 30,000 AD, he can’t write characters in the distant future that are fully developed.

Still, I give the Washington Stage Guild enormous credit for staging this play and for completing it. Shakespeare fans don’t just want to see Hamlet and Henry IV, but also King John and Titus Andronicus.  Shaw fans want to see his bad plays as well as his good ones.

The cast did the best they could with the material, but of the actors, I enjoyed the performances of Conrad Feininger and Laura Giannarelli the best.

One final point.  Having read Brian Stableford’s The New Atlantis last year, I know that what Shaw was writing was not sf, but the British variant, “scientific romance,” which died around 1960.  I suspect Back to Methuselah will be the only time I see a scientific romance performed on a stage.

[1] We used to have the American Century Theater, which specialized in well-made American plays.  They’ve now folded, but because of them I’ve actually seen The Seven Year Itch and Will Success Spoil Rock Hunter? performed on stage.

2 thoughts on “Stage Review: Back To Methuselah”